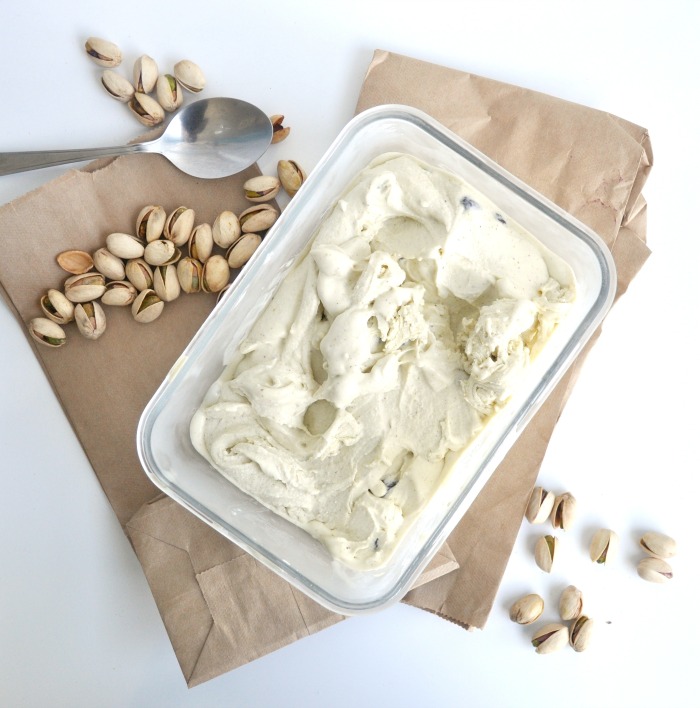 I grew up watching my dad eat handfuls of pistachios at a time, but I never associated them with cooking. I think the first time I actually made something with the beautiful green nuts was this granola. But since then, I never thought of actually cooking with them until we went to Italy this past July. In Sicily, pistachios are in everything: savoury pasta dishes, sweet cookies, and best of all, gelato. I have no shame in saying that it was a requirement to get gelato every night after dinner. There were so many flavours to try and there is really nothing that compares to eating good quality gelato, in a handmade cone, walking the streets of Europe. 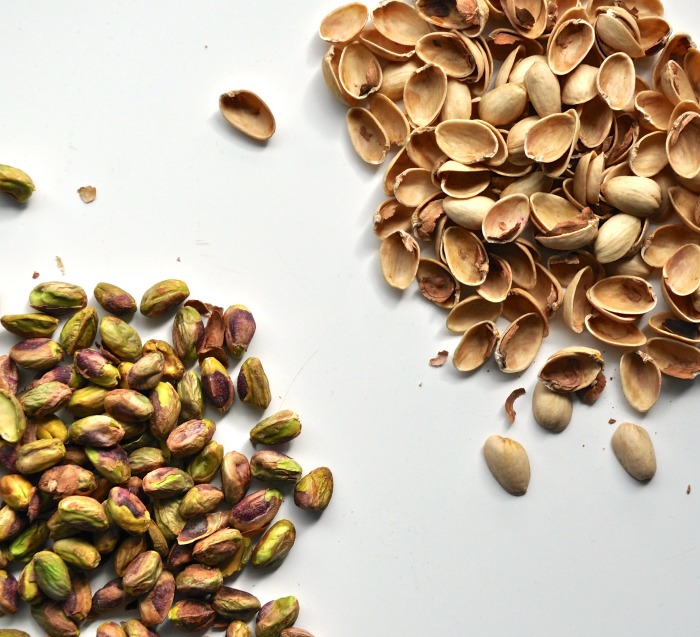 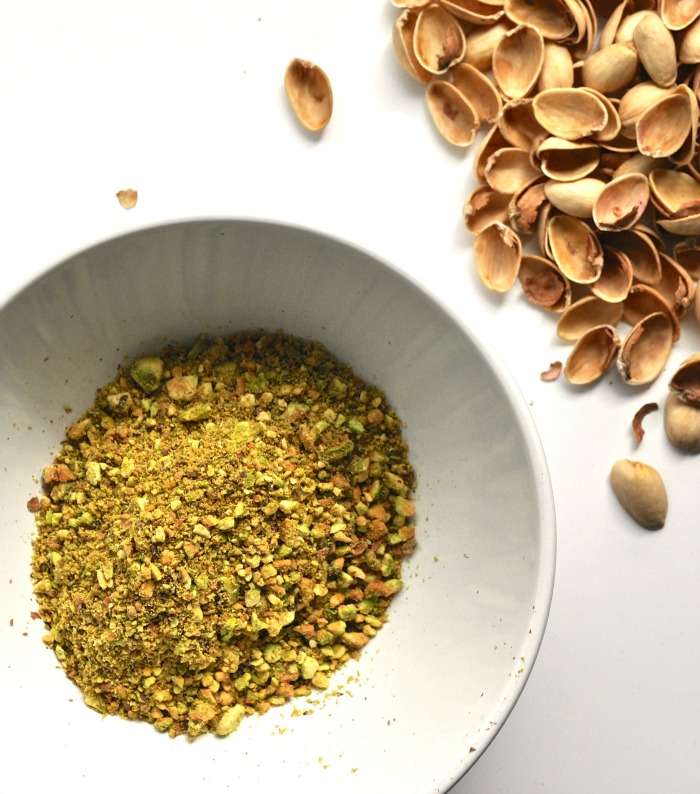 Last week when I made this beautiful meringue cake, I had a lot of yolks leftover and definitely didn’t want them to go to waste. The obvious choice to use them up was ice cream: it doesn’t go bad, it uses 4 egg yolks in one shot, and it is guaranteed tastiness. Since we went to Sicily, I’ve made sure to have pistachios in the house in addition to the nuts that we normally have on hand. So, it seemed fairly obvious to make pistachio ice cream, which was one of our favourites in Sicily. 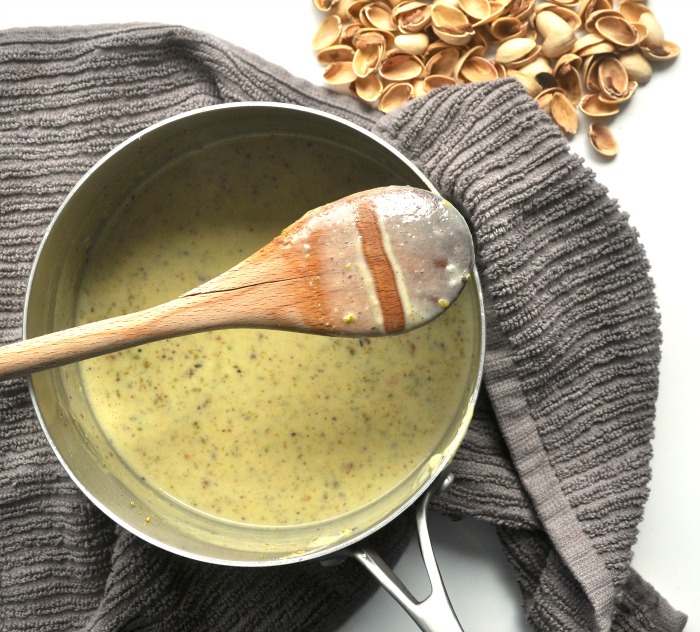 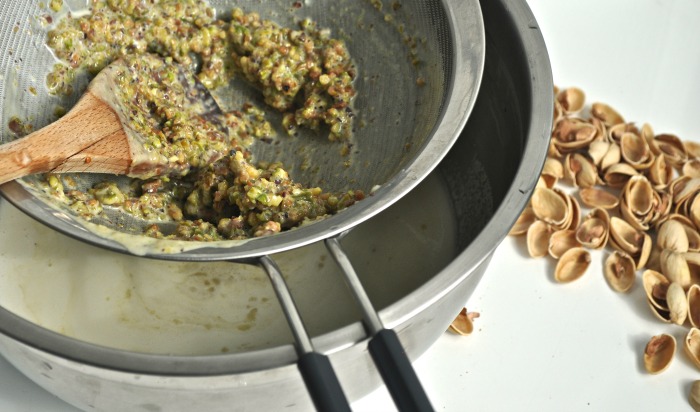 I really like making nutty ice cream, because the base is not fruit juice, which has a lot of water in it and can easily make the ice cream icy. The ground pistachio provide a concentrated hit of perfect pistachio flavour, and the ice cream is a really nice texture. A lot of recipes I saw had almond extract in it, which is very potent. Even 1/2 of a teaspoon adds a distinct almond flavour. While it definitely compliments the pistachio, leave it out if you want a pure pistachio flavour. I loved the addition of the dark chocolate covered pistachios as well. While you definitely don’t need it, who can say no to a little extra chocolate? 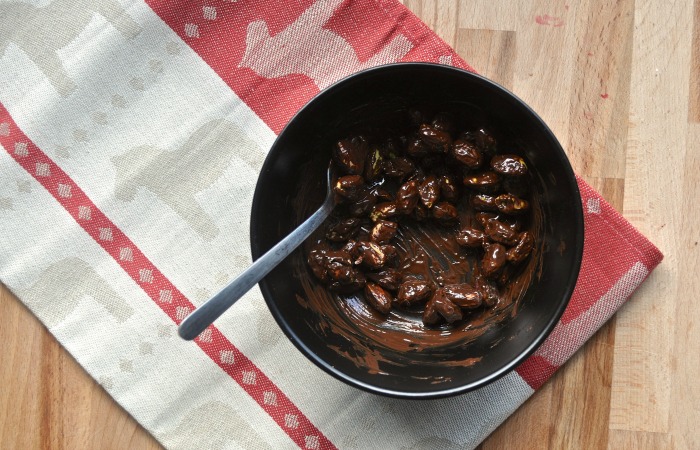 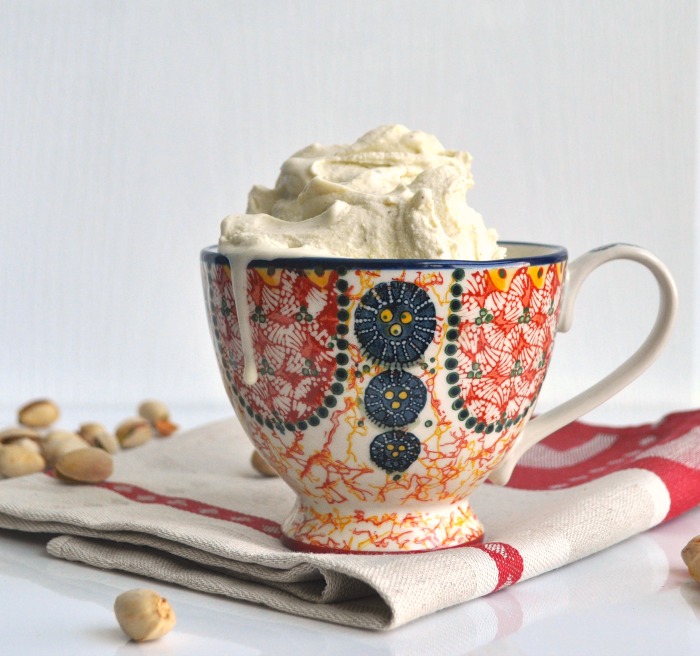 Base recipe from A Cozy Kitchen

A lot of recipes I saw had almond extract in it, which is very potent. Even 1/2 of a teaspoon adds a distinct almond flavour. While it definitely compliments the pistachio, leave it out if you want a pure pistachio flavour

In a food processor, grind 1 cup of pistachios until finely ground, but before it turns into a paste.

In a small pot heat up milk, sugar, salt and pistachios until sugar is dissolved.

In a large bowl whisk egg yolks until light.

Return mixture to the pot and heat up over medium heat until the mixture has thickened, stirring with a wooden spoon the entire time. To test whether it's ready, draw a line with your finger and make sure it is thick enough that it doesn't drip.

Stir in cold cream and cool down in the fridge for at least 4 hours.

Transfer to a container and store in freezer.