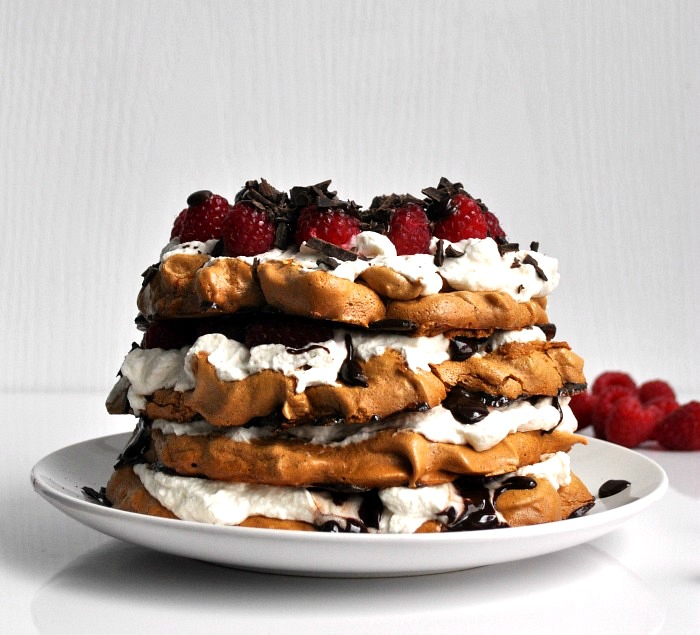 Last week, it was absolutely freezing here in Calgary. I have to be careful what I wish for, because last month when it was 30C outside and our apartment was sweltering, I caught myself looking forward for when things would finally cool down and I could be in our apartment without dying of heat. Now that it’s been 10C (in August!) I am swaddled in blankets and wishing that the sun would come back. All of this to say, one of the things I normally avoid in a summer recipe is having to turn on the oven. I’m sure like most people, when you are hot, the last thing you want to do is add to that heat by turning up the oven or standing in front of the stove. 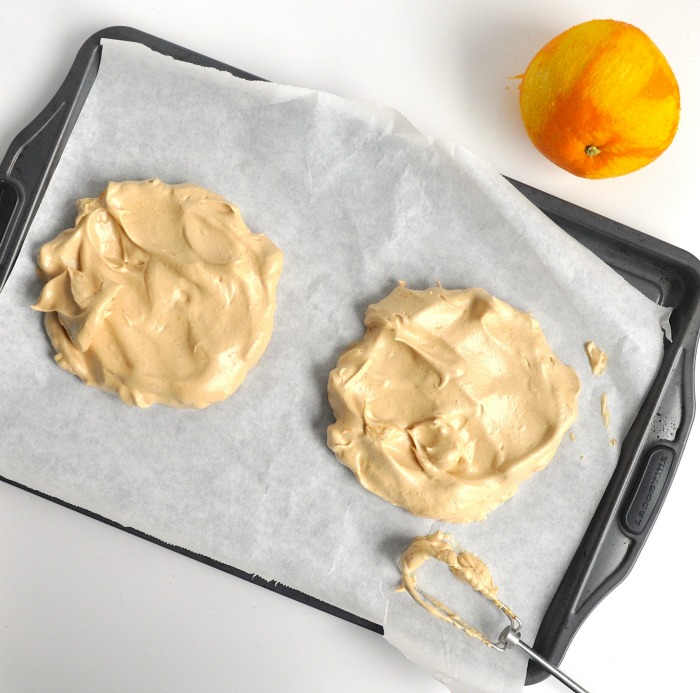 This recipe requires you to have your oven on for two and a half hours. So I took advantage of the cool-down to make this summery recipe on the bleary, rainy Friday we were having last week. This was the first time I ever made meringues. It’s pretty easy but I have a few tips to keep in mind:
1- You have to make sure that you don’t get any egg yolks in your egg whites or they won’t whip up. Normally I separate my eggs and pour each egg white into a separate bowl so if I screw up the 5th one I don’t have to throw out the whole lot.
2- Make sure to add the sugar after your egg whites have developed into soft peaks.
3- Meringues are incredibly sticky. I would suggest using parchment paper to line your baking tray, since they are being baked at a low temperature anyway. I found the easiest way to get them off was to do it straight out of the oven and to cut the paper around the meringue so that you could flip it upside down in your hand and peel the parchment paper off the back of the meringue. If a little bit gets stuck on the baking paper, it’s not the end of the world in terms of presentation since they will be covered up with copious amounts of cream, chocolate and raspberries anyway. 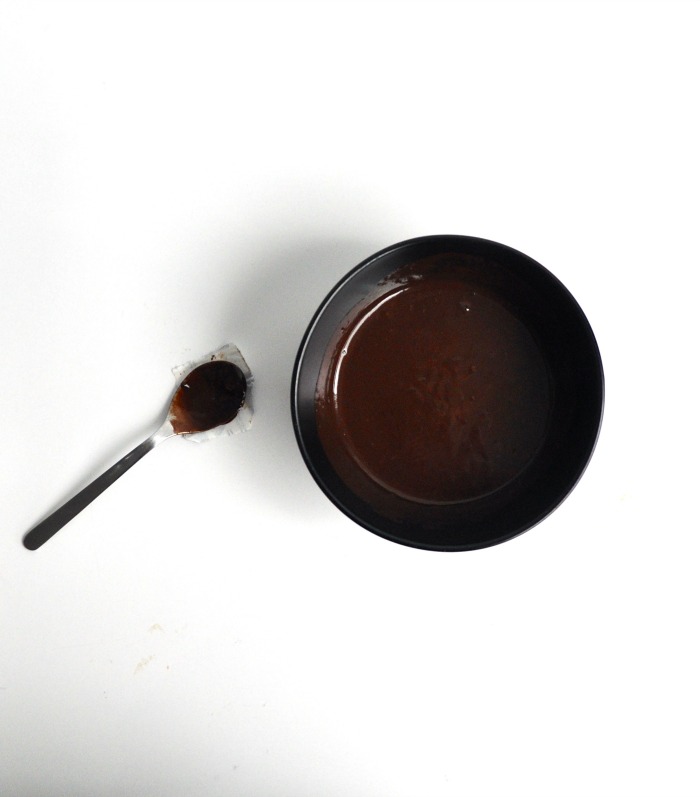 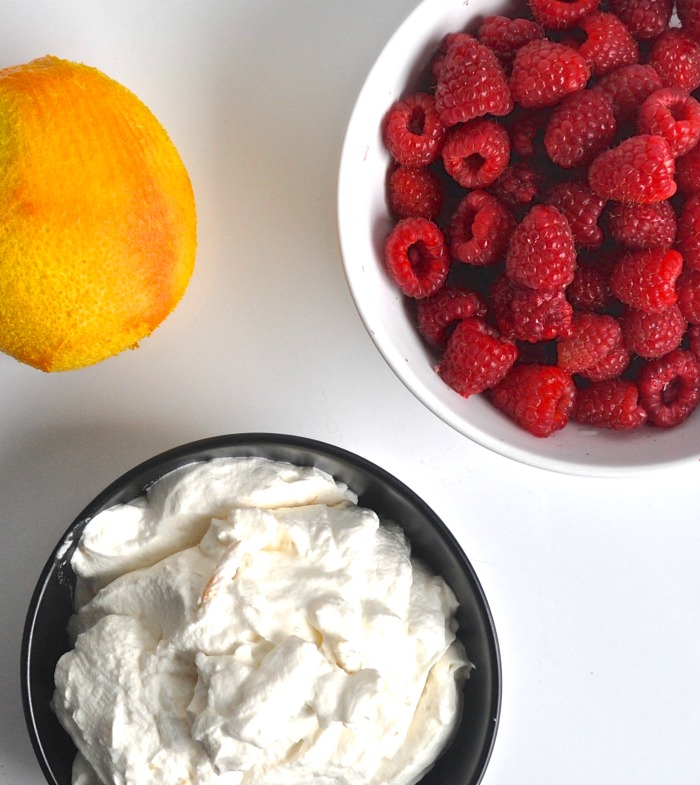 This is a dessert I’ve been wanting to make for a while. I got the flavour combination of orange, chocolate and raspberry in my head and couldn’t get it out. I also think this is a wonderful dessert to scale up or down. You could easily pipe your meringues into individual sized discs, use only two layers, and have an individual dessert. This time around, I opted for a big guy since I was bringing it to a BBQ to share with a bunch of people. I would suggest if you are transporting it to let it firm up in the freezer for about 45 minutes before you attempt to put it in the backseat of your car, or you may end up with a very lopsided cake. 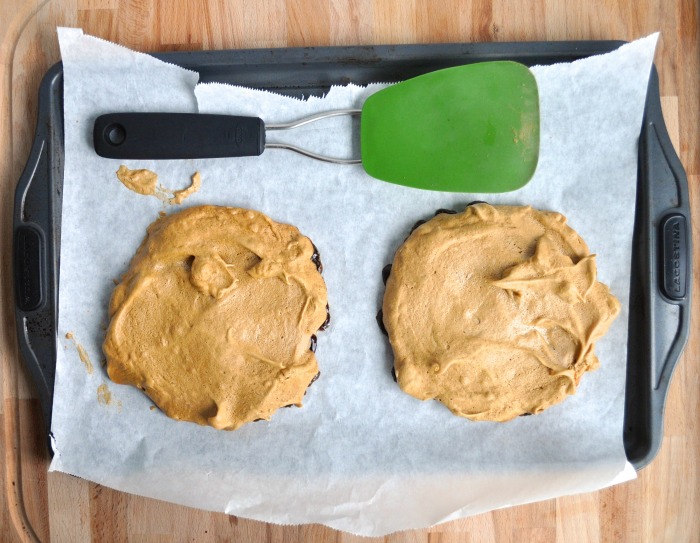 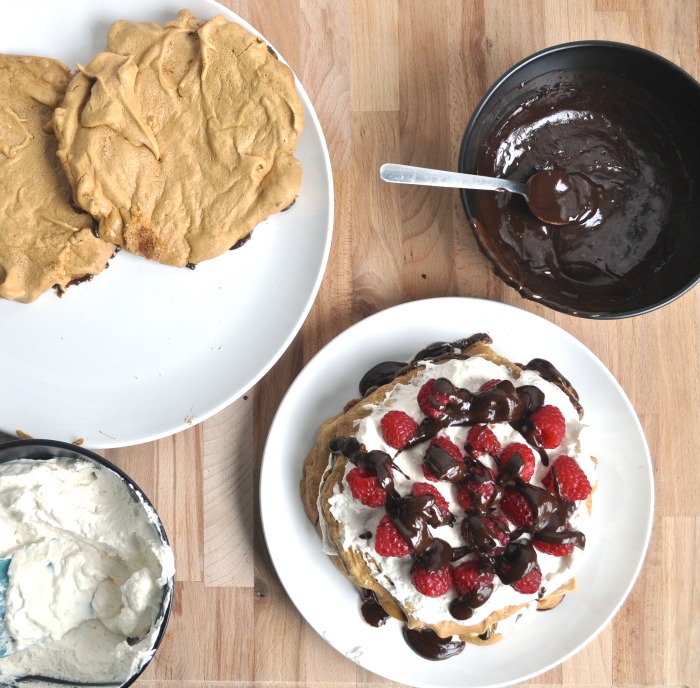 The meringues are vaguely orangey and quite sweet. Because we are using coconut sugar, instead of traditional granulated sugar, the meringues turned out brown and had a deeper, slightly caramelized flavor. I kept the cream lightly sweetened so that the entire dessert wasn’t too sugary. The vanilla and orange combination in the whipped cream is also really delicious. When I tasted the cream on is own, it kind of reminded me of a creamsicle, but the flavour wasn’t very overpowering when combined with everything else in the cake. The dark chocolate is a no-brainer (chocolate + orange + fresh fruit = heaven) and the raspberries provide some fresh berry bursts.

The longer you wait to serve this dessert, the more the layers will combine with one another, and you will lose some of the texture of the meringue. It didn’t bother me at all, but it’s something to keep in mind. If you’re concerned with getting really clean slices, it’s best to eat it straight from the freezer, but I preferred it out of the fridge, a little messy, with unfrozen berries. 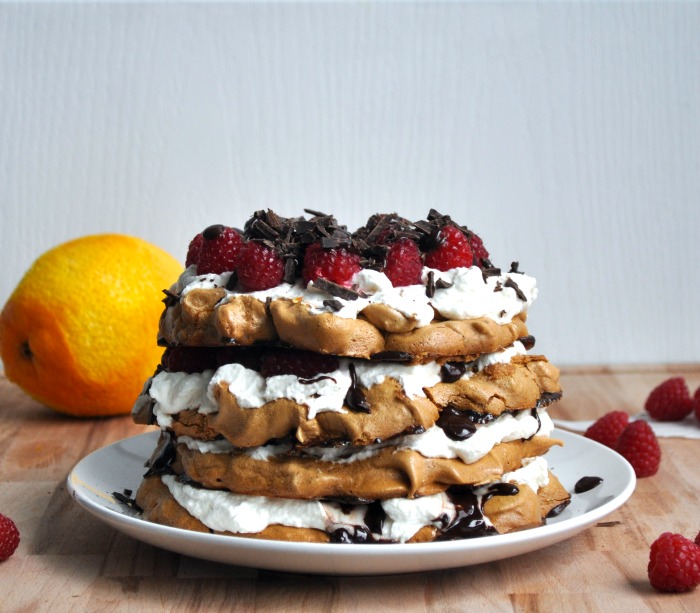 Make sure you don't get any egg yolks into your meringue mixture, or they won't whip up properly. Also, make sure to only add your sugar once the egg whites have become soft peaks and to add the orange zest right at the end.

The meringues have a nice thin shell on them but are very sticky when they come out of the oven. Make sure to use parchment paper and to peel it off when your meringues are still warm. I found the easiest way was to use scissors to cut around the meringue, so that I could hold it in my hand while I peeled off the baking paper.

If you are transporting this or want super clean slices, let the cake firm up in the freezer for about 45 minutes before transporting or serving. The longer you let this dessert sit, the more the meringue will lose its texture. It doesn't make it nay less delicious, but it's something to keep in mind!

Bake for 1.5 hours, turn off oven and leave in warm oven for an additional 1 hour and 10 minutes.

Stir together melted chocolate and whipping cream, set aside.

Whip the cream until it reaches soft peaks. Add sugar, orange zest and vanilla and whip until thickened.

Garnish with some chocolate shavings.