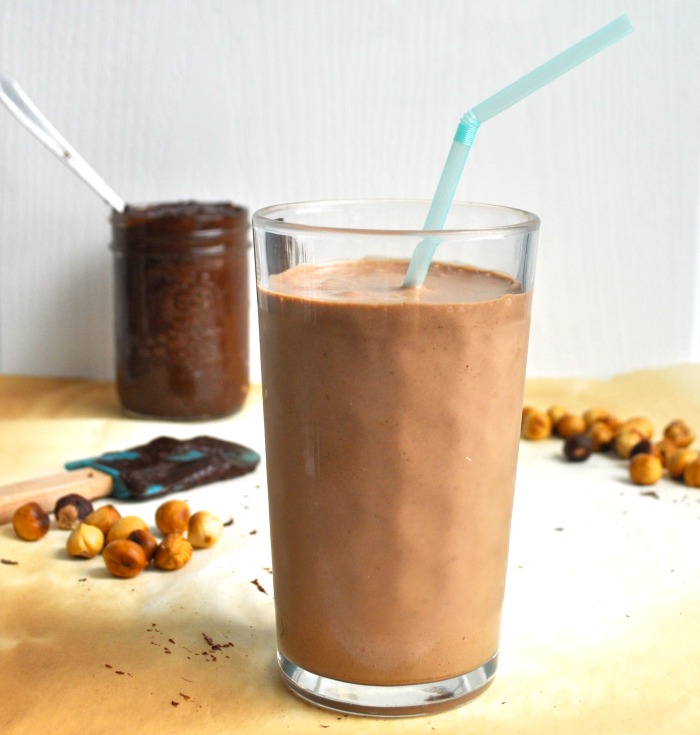 My boyfriend used to make us the best mango milkshakes ever. They were creamy, sweet, and refreshing all at the same time. Then I saw what he was putting in them (i.e. 4-5 huge scoops of ice cream for two people) and I wasn’t surprised that they tasted so good, but I was also less inclined to drink them at the rate we used to. I thought of these a couple of weeks ago when we were in Vancouver. We went to a milkshake place and my boyfriend and his friend got nutella banana milkshakes, which were absolutely outstanding. It looked like the guy behind making them used half a tub of nutella, half a tub of ice cream, a couple of bananas and milk for the drinks, so it wasn’t the biggest shocker that they tasted great. 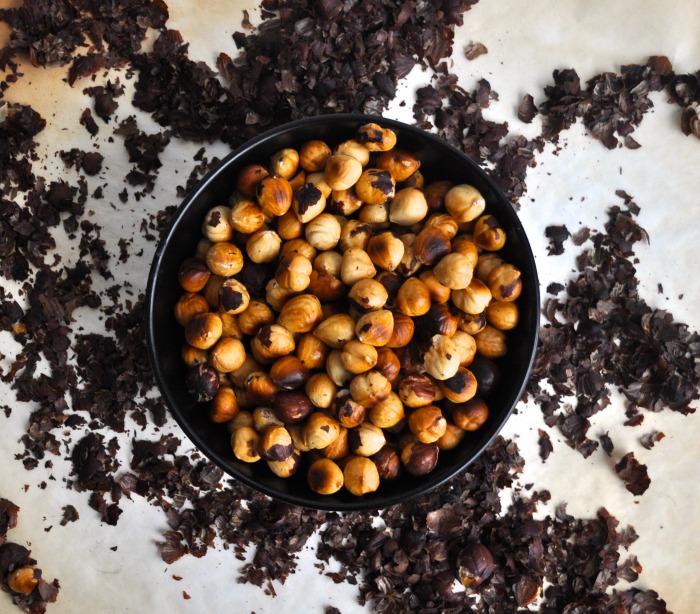 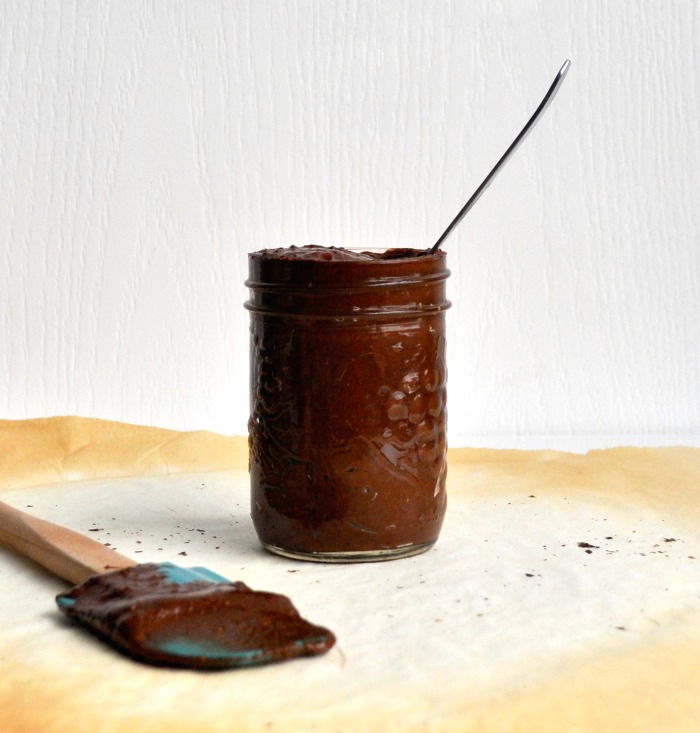 While I’m all for a treat every once in a while, I figured it would be more practical to come up with a slightly healthier version to make at home. I discovered homemade hazelnut butter back at this blog’s inception, and it was one of my first posts here. I remember being amazed how roasted hazelnuts, a bit of sweetener and a bit of salt could make such a delicious end result, so it’s not surprising that things get even better when you add a little chocolate. The resulting ‘nutella’ is something I would happily eat by the spoonful (or on toast or drizzled in yogurt). The balance between the hazelnut and chocolate is much more equal than in the traditional spread, so if you’re looking for something even more chocolatey, just double the amount of melted chocolate in the finished product. You can also add more sugar to get closer to the real thing but I like it semi-sweet. 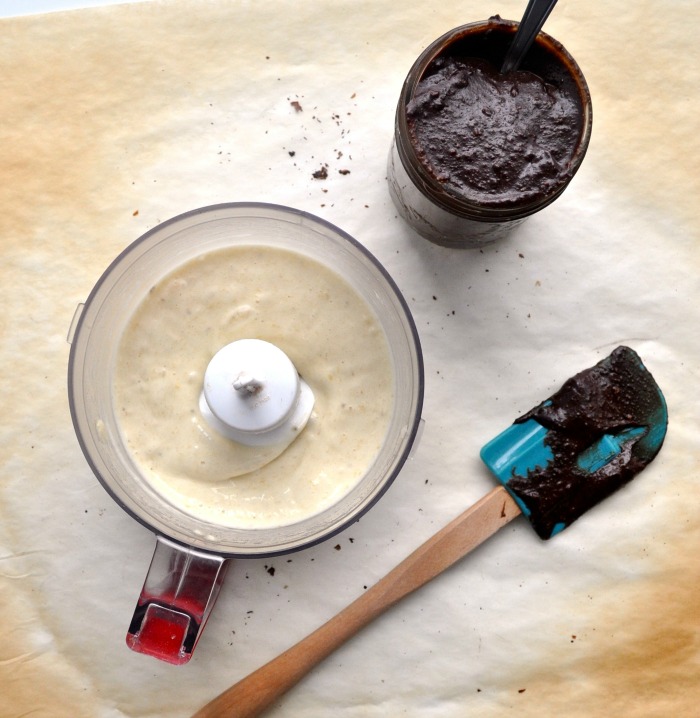 The shake is smooth, thick, rich, chocolatey with a banana punch. If you’ve never tried frozen banana ‘ice cream’ before, today should be the day. All you do is freeze a banana and blend it until smooth. It’s definitely looser than regular ice cream but is surprisingly creamy and satisfying. By freezing the banana and blending it, it adds the ice creamy texture that every shake needs. A generous scoop of our ‘nutella’, some milk and a generous amount of ice and we’ve got ourselves a tasty treat on our hands. 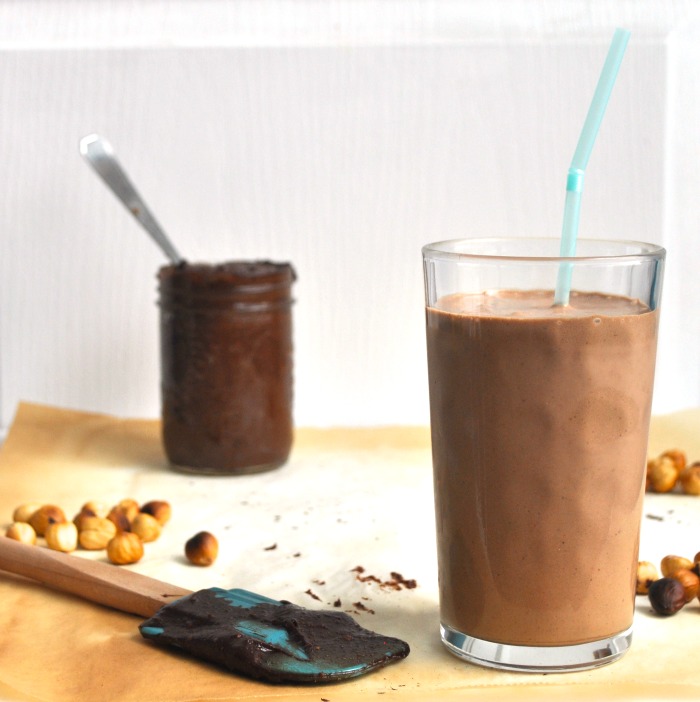 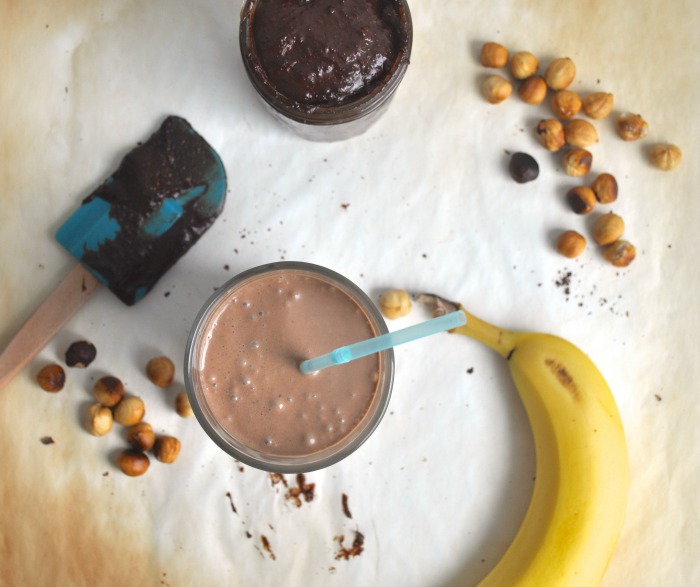 You will have enough 'nutella' to make about 4 very large shakes. Even if you're making less, you will have no problem using up the leftovers swirled into yogurt, slathered on toast, or eaten by the spoonful.

Make sure your chocolate is vegan. If you don't care about the shake being vegan, feel free to replace the almond milk with cow's milk.

Preheat oven to 400F. Roast hazelnuts for 10-12 minutes, until skins are cracked and nuts are golden.

Let cool for a few minutes.

Remove hazelnut skills by rubbing the nuts between your hands or a clean kitchen towel.

In a food processor, combine hazelnuts, sugar and salt until it starts to form a paste.

Melt chocolate in microwave and mix in milk.

Add cocoa powder and chocolate/milk mixture to hazelnut paste and grind in food processor, until smooth.

Taste and adjust sweetness or chocolate-ness to your own taste (my version is not too sweet and you can still taste the hazelnut).

Store in air-tight container, in the fridge.

Blend frozen banana until smooth. It should have the consistency of loose ice cream.