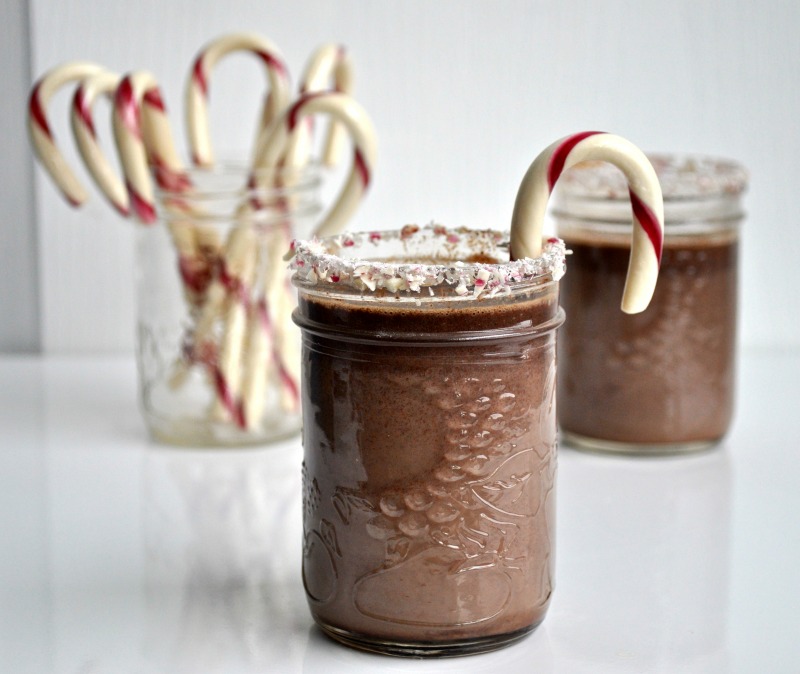 I feel like I haven’t been in here in ages. Even the last recipe was one that I made a while ago and had saved for a busy week. There are a number of reasons why I haven’t been around. First, I had a few kitchen disasters. Two almost wonderful recipe that I intended to post didn’t work as I had hoped. They both tasted delicious but the texture was just off. I am determined to fix them so hopefully you will see them soon. After that, the water main outside of my building broke and we didn’t have water for three days. I have to say, I never realized how many daily happenings relied on having water, so it goes without saying that no cooking took place. I am very grateful to have it back! 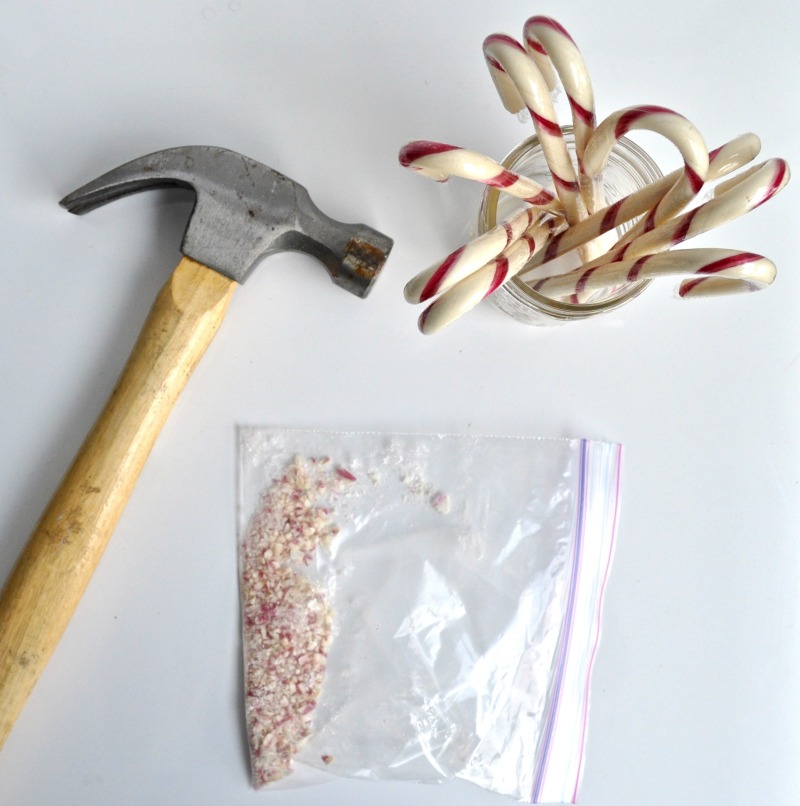 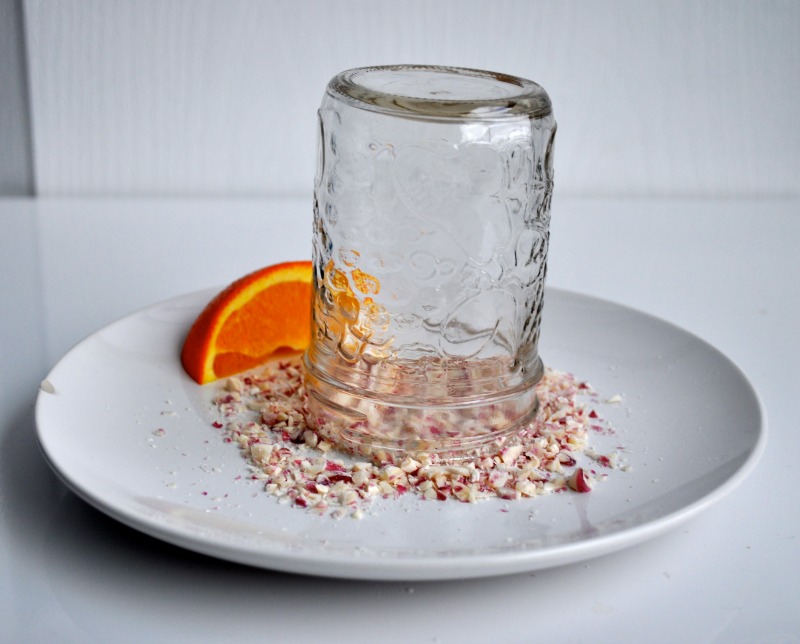 Luckily, this hot chocolate has come to the rescue. I definitely think that hot chocolate is a bit of an indulgence at home, but when it’s -40 outside (yes, I said -40) for MULTIPLE days in a row, it’s definitely called for. One day last week, Calgary was actually the coldest place on earth. It beat the arctic circle by a few degrees. I have to admit, it’s pretty depressing but I am trying to shift my focus to wintery activities we’ll be able to do throughout the long season ahead. While a lot of these aren’t suitable for -40 degree weather (think skiing, snowshoeing, skating etc- maybe in -20 degrees?), drinking this hot chocolate is suitable no matter what it’s like outside. In fact, it’s even more satisfying on a snowy, cold day. 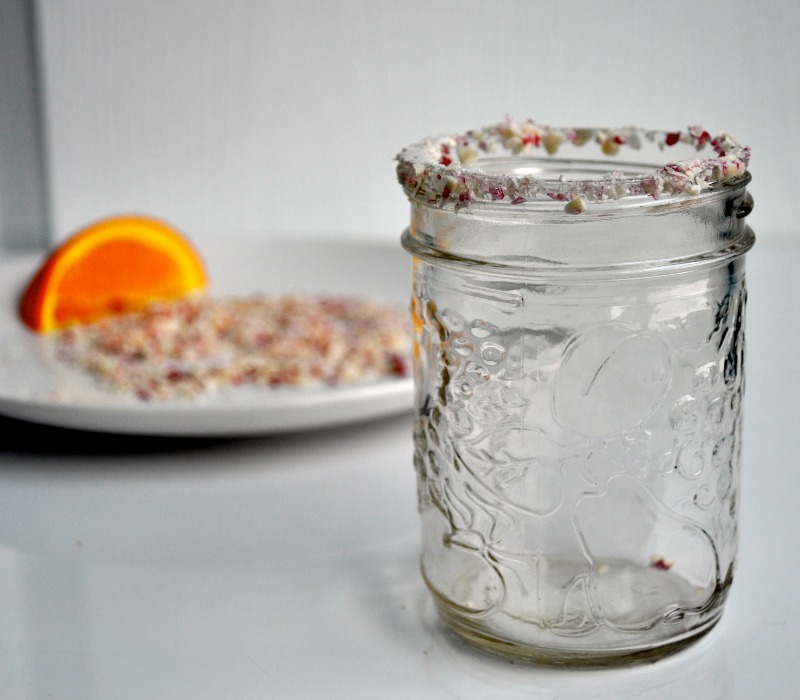 There is a lot that’s great about this hot chocolate. First, there is smashing involved! I felt pretty intense smashing the candy canes with a hammer but it definitely worked well. For a less violent crushing, you can always use a heavy mug or pan. Second, I drank it out of a mason jar. I thought for the purposes of your viewing pleasure that serving this up in a clear mason jar would be best, but it also felt so nice to drink out of. Does anyone else love mason jars this much? I recently transferred all of my bulk goods that were sitting in dozens of plastic bags into mason jars of various sizes, this was exceedingly satisfying for me- tell me I’m not alone?! Last, it’s rimmed with candy canes- how great is that? Not only does it look festive and extra special, but it also gives each sip an extra punch of candy cane flavour. Given that the candy cane flavour isn’t super overpowering in the hot chocolate itself, I would say that the crushed candy cane is definitely a must for this drink. If you want to pump up the minty flavour, you can also try adding some peppermint extract or steep the mint leave for a longer period of time, but I think that it’s great as is. It’s a lovely treat (or even dessert) for the holiday season. If you’re looking for some hot chocolate outside of the holiday season, you can try this iced spiced version! 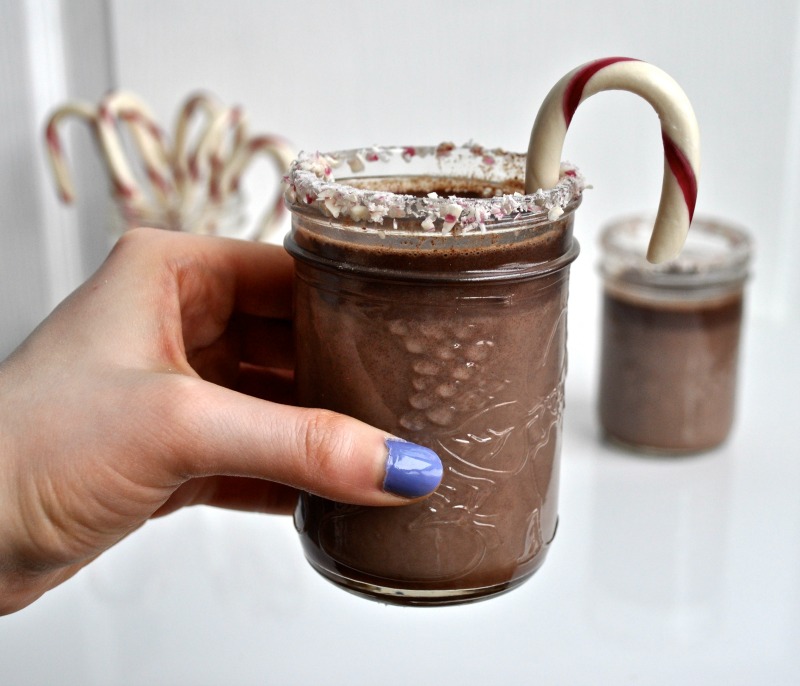 You can easily make a vegan version of this by using an alternative milk product. I would suggest unsweetened almond milk!

Put two candy canes in a ziploc bag. Using a hammer or a heavy mug, crush candy canes until there are no big chunks left.

Bring to a simmer and whisk so that candy canes dissolve.

Remove from heat and let steep for 15 minutes.

Over a medium heat, whisk hot chocolate mixture until combined.

To rim your mugs, place remaining crushed candy cane on a plate.

Swipe an orange segment around the mug and dip into crushed candy cane.

Using a ladle, fill mugs with hot chocolate and garnish with a candy cane.