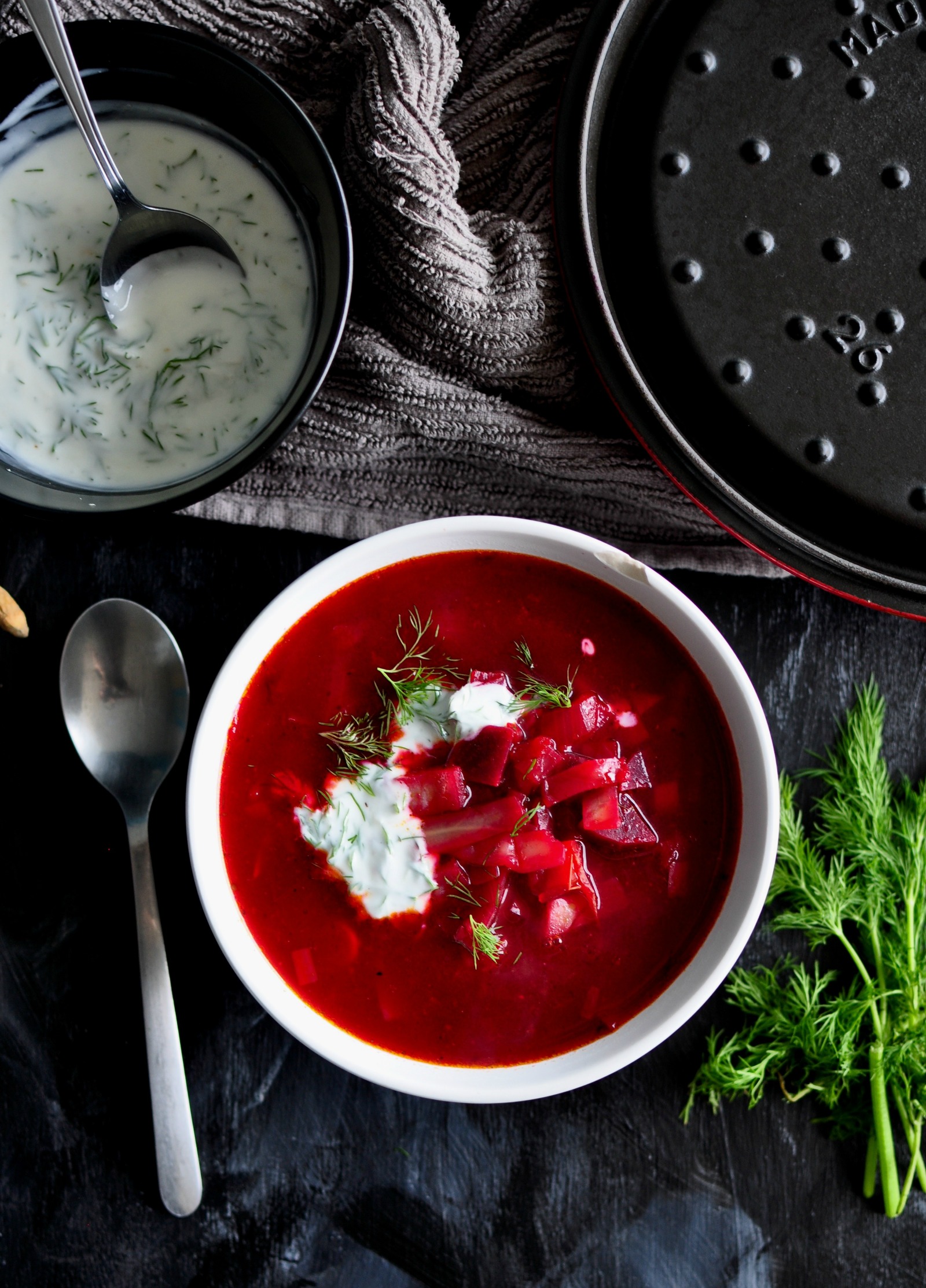 I never learn when it comes to beets. I always buy them, come home, stare at them, and have no idea what to do with them. I don’t love beets in juice and never really eat more than a couple of bites of roasted beet salad. Don’t ask me why: they are gorgeously sweet and earthy and have a lovely, firm texture but beets just aren’t my thing. So, last week when I went to the store and bought a bag of beets, I came home not knowing what to do with them, again. That is, until I remembered borscht. I love borscht and it has been on my list of things to make for this blog for a very long time. I have no idea why I haven’t gotten around to making it, but I’m so glad that I finally did. I realize that for someone who said they don’t particularly like beets, borscht is a strange thing to like. But I’m ok with being a little bit strange. And I can proudly say that this soup is great and I won’t mind eating bowl after bowl of it in the coming days (this recipe makes a lot of soup!). 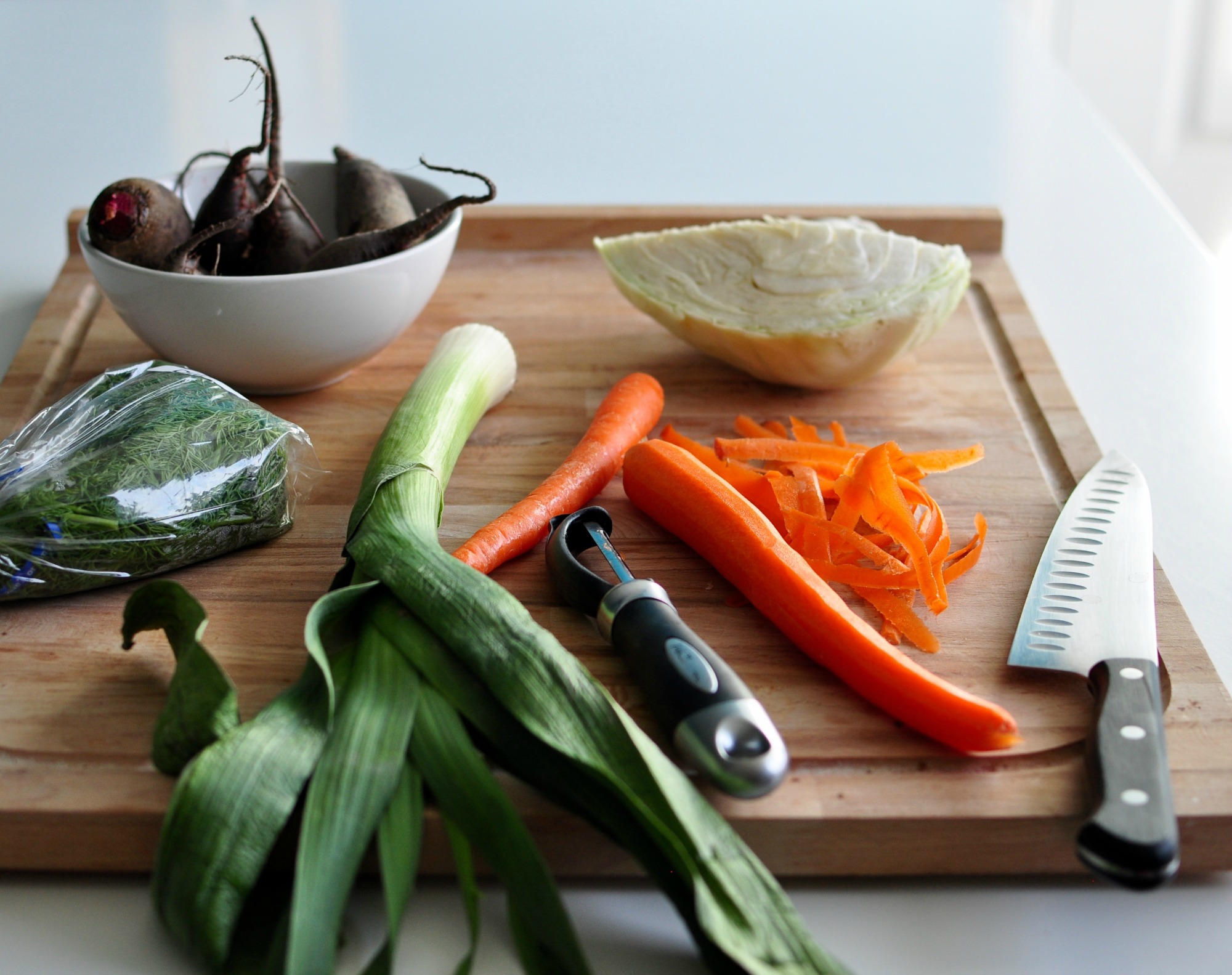 One of the things that made me think of borscht was that I am planning on making some potato verenikas with some friends this weekend. The last time I have verenikas (or pierogies) was at the farmer’s market that I used to sell my bagels at. There was a lady from Moldova who made the best pierogies, which I would get every once in a while when I was hungry and wanted a bit of comfort food. The only downside to getting them was that it was a humongous container of pierogies slathered in sour cream, which can be a little heavy (especially when you can’t control yourself and eat the entire thing), so one of the days I tried her borscht. Surprisingly, her version of borscht (and I feel like this is definitely a dish with many different versions) had no beets in it at all. What it did have was a lot of dill, which was delicious. So, when I thought of her soup I knew I wanted to make a beet-ier version but keep the fresh dill flavour. 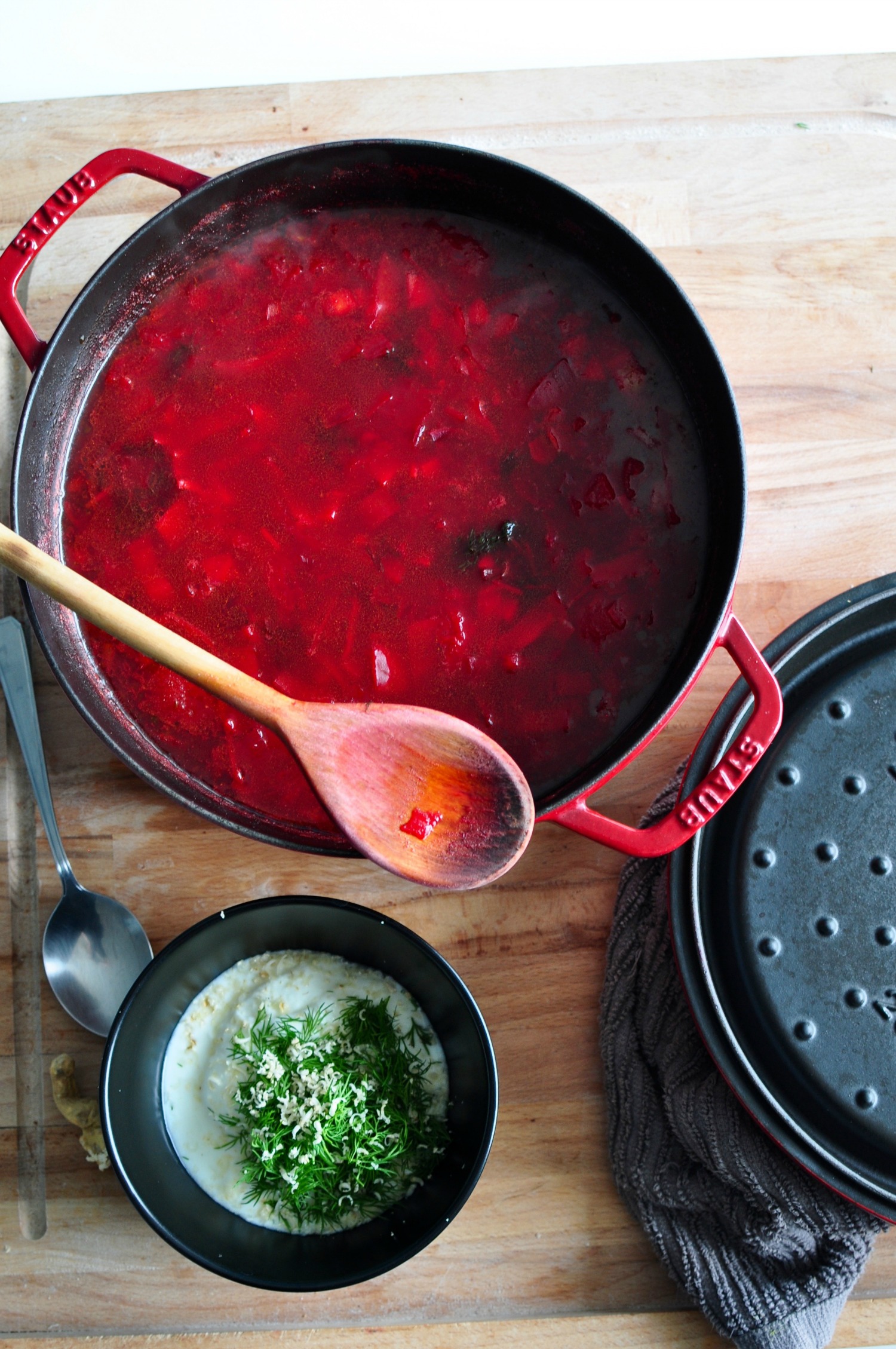 What I ended up with was a beautifully warming soup. It is full of cabbage, leeks, onion, and beets, exactly what borscht should be in my mind. Dill is the only real seasoning in the soup (other than salt and pepper) but it’s not overpowering. Beyond the fact that the soup is delicious on its own, the yogurt topping takes it to the next level. The same day that I bought the beets, I also got my hands on some fresh horseradish. Horseradish, dill and beets are a classic combination for me and the yogurt does not disappoint. It adds a zing of flavour and I love the contrast between the hot soup and the cool yogurt. There is also something very satisfying about swirling the white yogurt into the bright red soup and topping it with some extra bright green dill. Beautiful food somehow tastes even better (does this make me even more strange?). 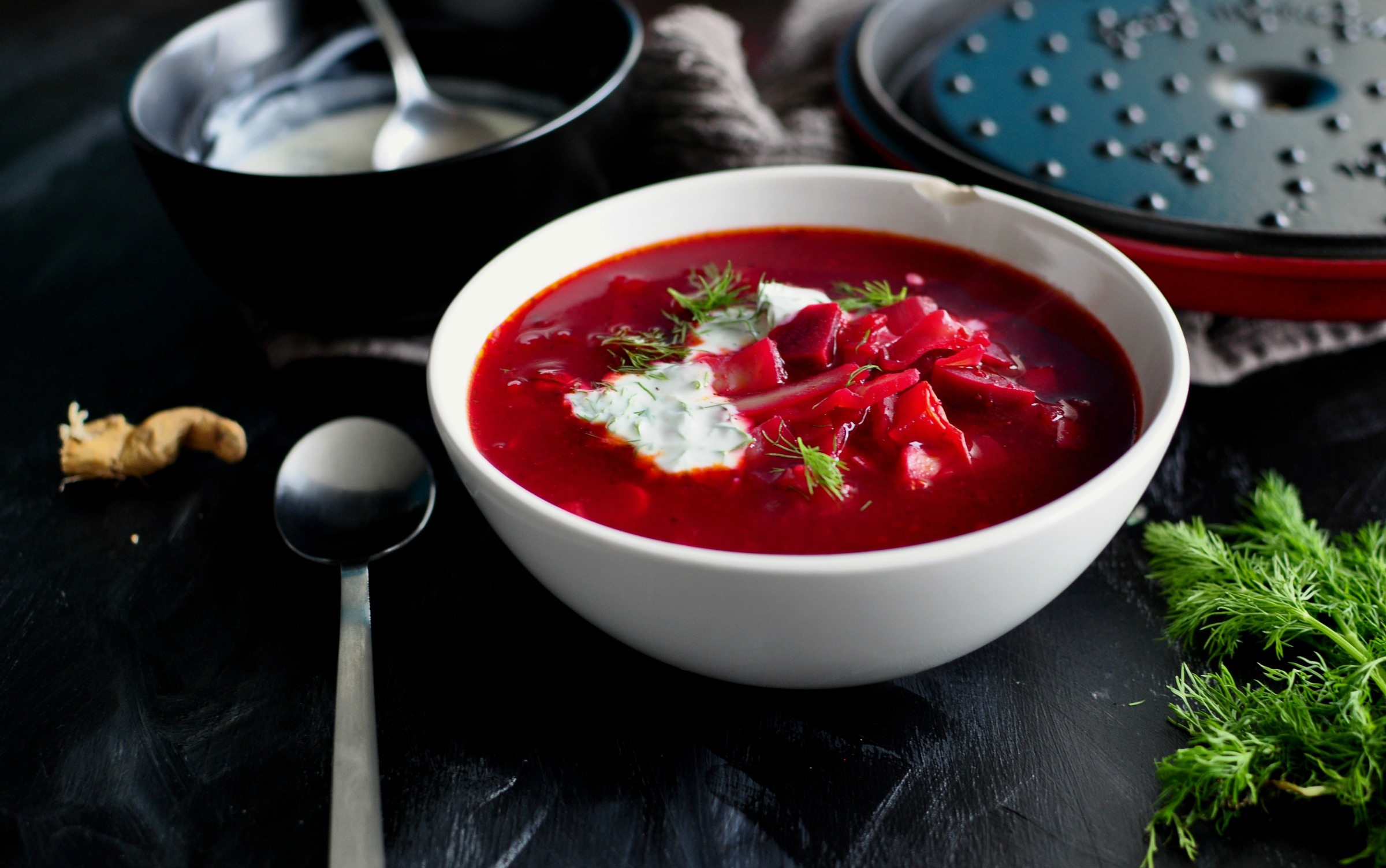 If you plan on serving all of the soup at once, you may want to double the amount of horseradish dill yogurt to make sure that you have enough.

In a large pot, heat up olive oil over medium high heat.

Saute carrots, leek, onion and garlic cloves until they begin to soften (3-5 minutes).

Add cabbage, stir and cook for another 3-5 minutes, until the cabbage begins to wilt and soften.

Simmer, uncovered for about 40 minutes. Stir occasionally. The beets should be cooked through but still have some texture.

Serve hot with a swirl of the dill horseradish yogurt and extra, fresh dill.

Mix all ingredients together in a bowl. Taste and adjust amount of horseradish and salt.

3.1
http://mysecondbreakfast.com/borscht-recipe/
Borscht was last modified: November 15, 2015 by My Second Breakfast