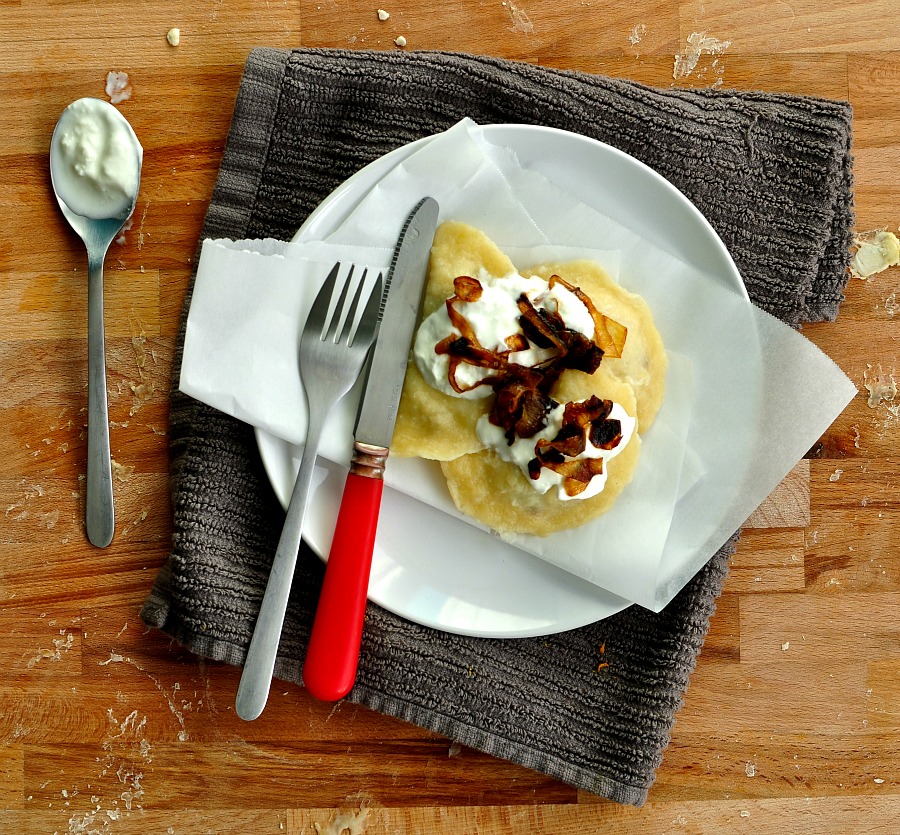 I grew up eating verenikas, a crescent moon shaped pocket of boiled dough, stuffed with creamy potatoes, and topped with sweet caramelized onions and sour cream. Since I left Montreal, I don’t really see them around anywhere. You don’t realize what is special to the place that you live until you leave, and verenikas is definitely one of those things. Also, once I left I became a lot more nostalgic about the food. I don’t imagine regularly buying verenikas if I lived in Montreal, but it’s something I think about now that I don’t. Anyway, now when I come back to Calgary, my suitcase is filled with bagels, cheese bagels (these are next on my list to tackle!) and verenikas. It is not a sustainable model for addressing my food cravings. 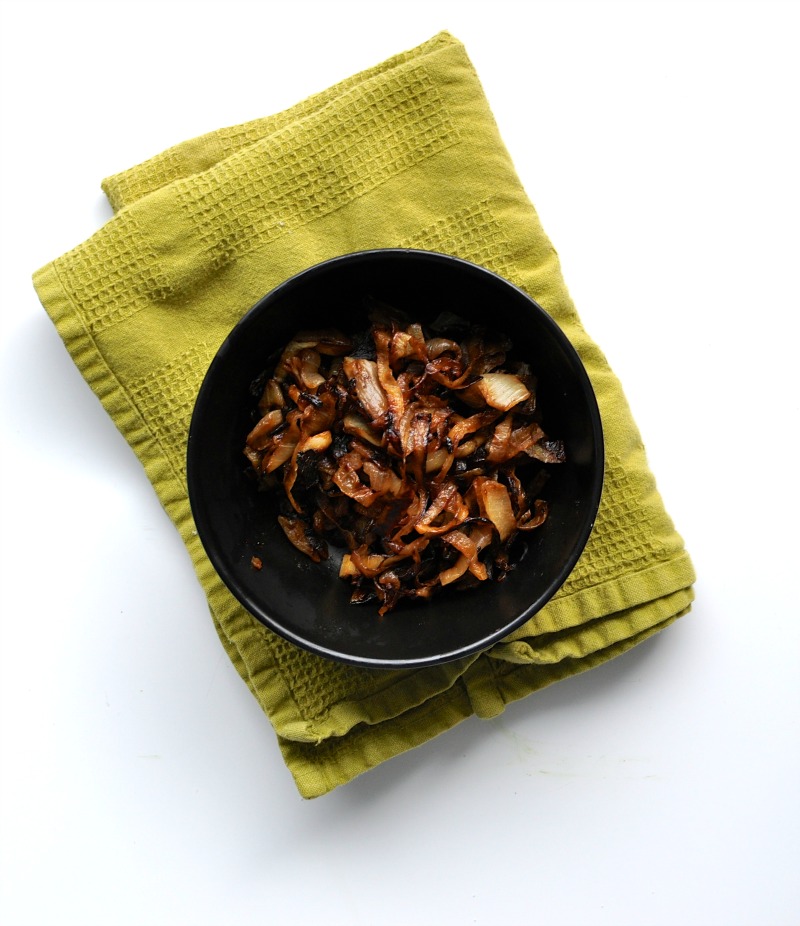 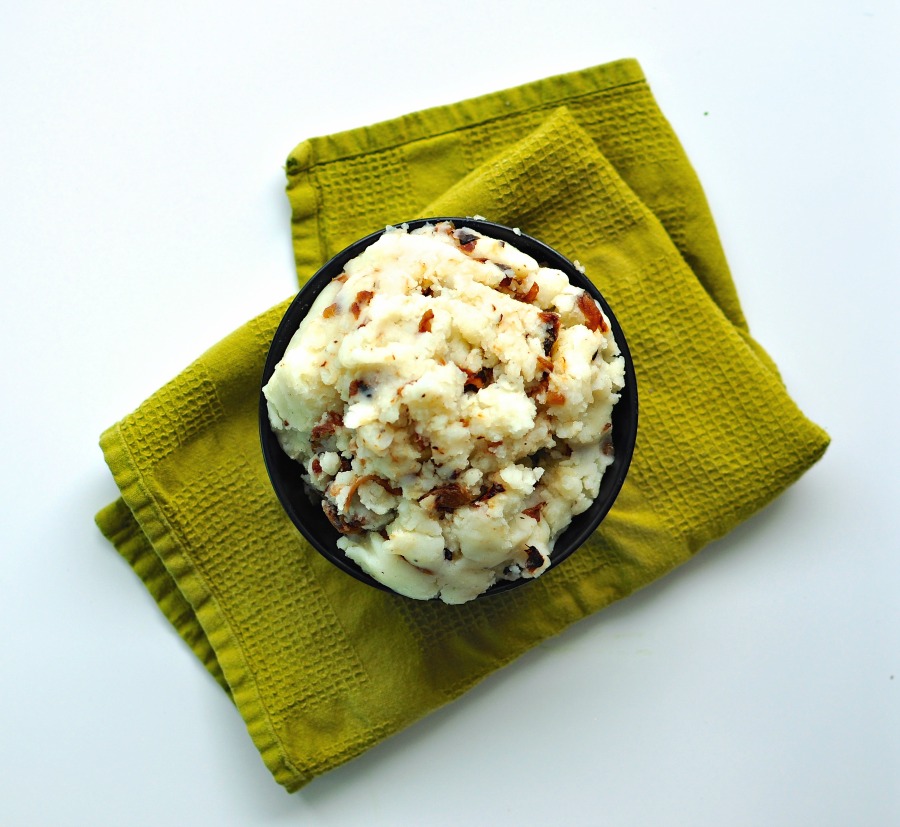 After realizing that verenikas was not a common food, I turned to google to find out where it was actually from. I have to admit, a lot of the photos of verenikas was not something that I recognized. Wikipedia tells me that it’s a Ukrainian dish (are they actually called varenyky?) and another site tells me the dish stems from Northern Europe. I wouldn’t be surprised if all of the above was a little bit true since there are so many cuisines with dough stuffed with potato (for good reason, it’s so delicious!). The most confusing part was knowing how they differ from pierogis. It’s all very confusing. All I know, is what I grew up eating and that’s what I set out to re-create here: a chewy, boiled dough, filled with creamy potatoes, topped with deeply browned onions, and a generous dollop of sour cream. 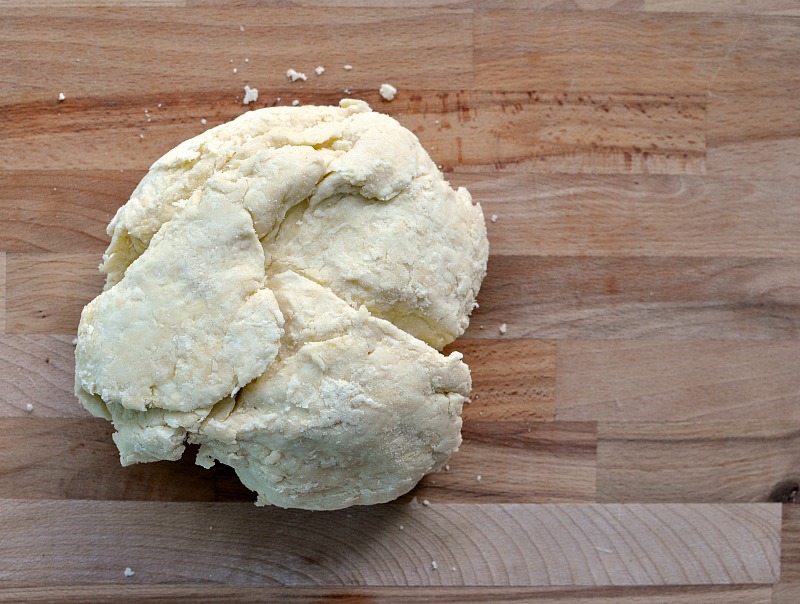 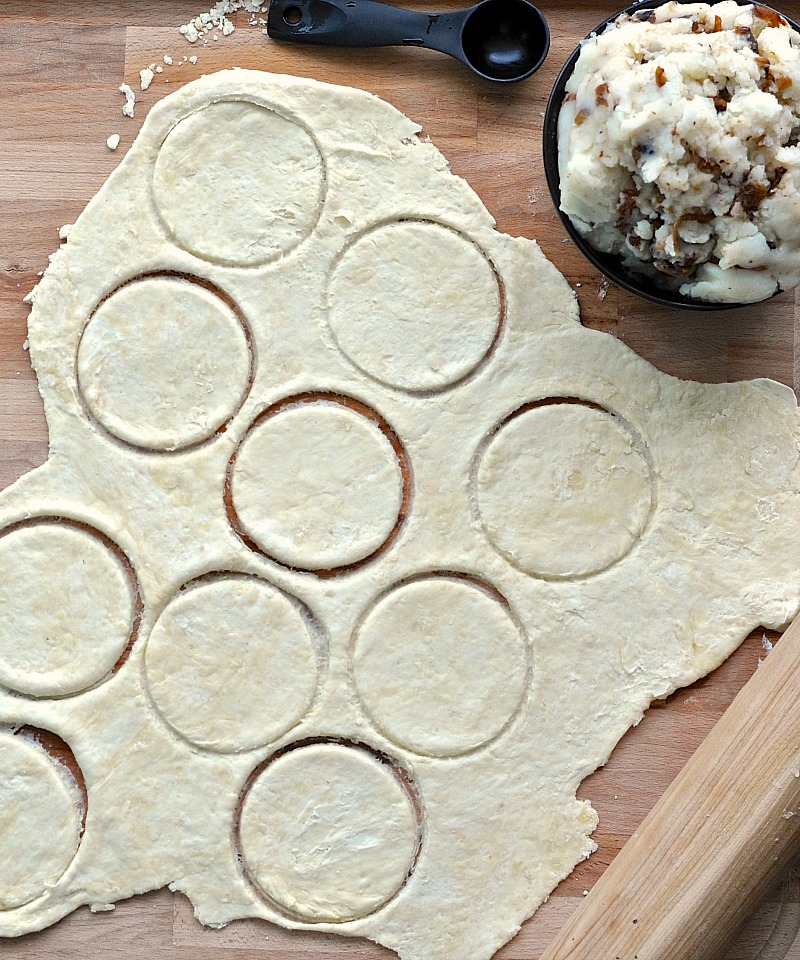 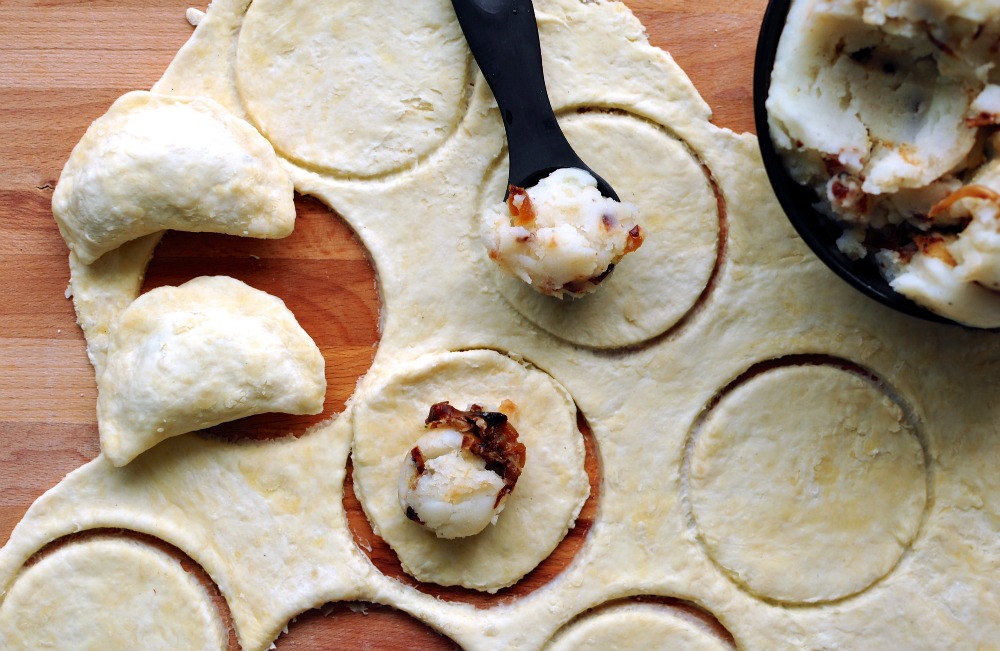 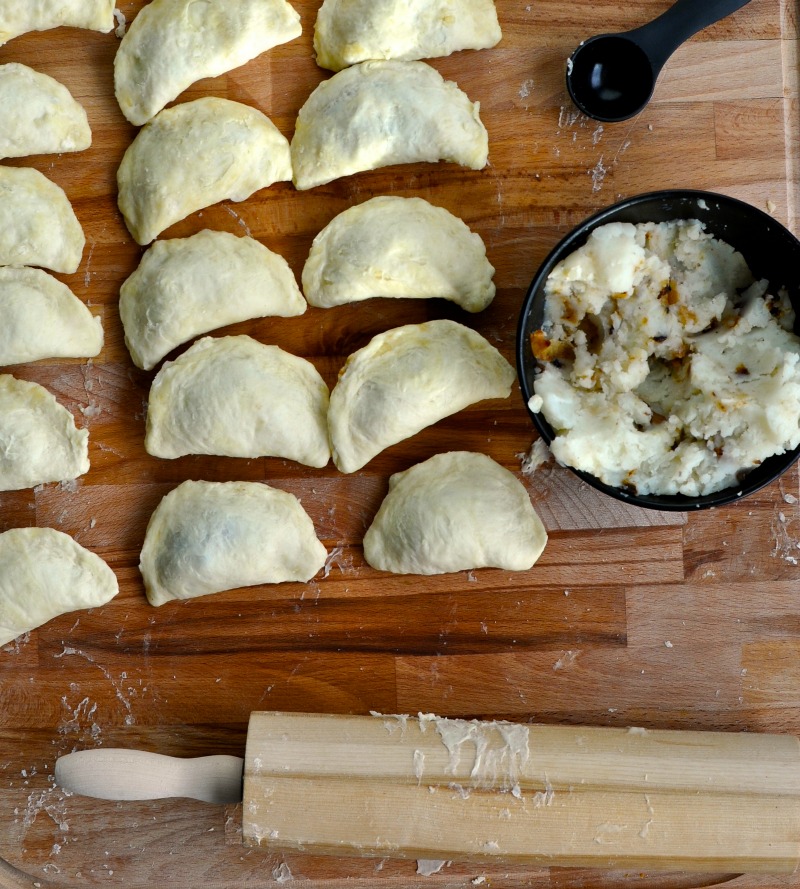 I couldn’t have asked for anything better than the final result. It’s a bit of a time intensive process, like most dumplings are, but like other dumpling recipes they are great to stash in your freezer and pop out when you need a warm pocket of comfort, as a side or a hearty snack to tide you over through the afternoon. I also made the filling the night before, which made it seem like a much less onerous task. I also decided to fold some of the caramelized onions into the mashed potato, which I’ve never had before but thoroughly enjoyed. The potatoes are smooth, the onions are sweet, and the dough has the perfect balance between tenderness and chew. It looks like my suitcase will be just a little bit lighter the next time I come back from a visit to Montreal. 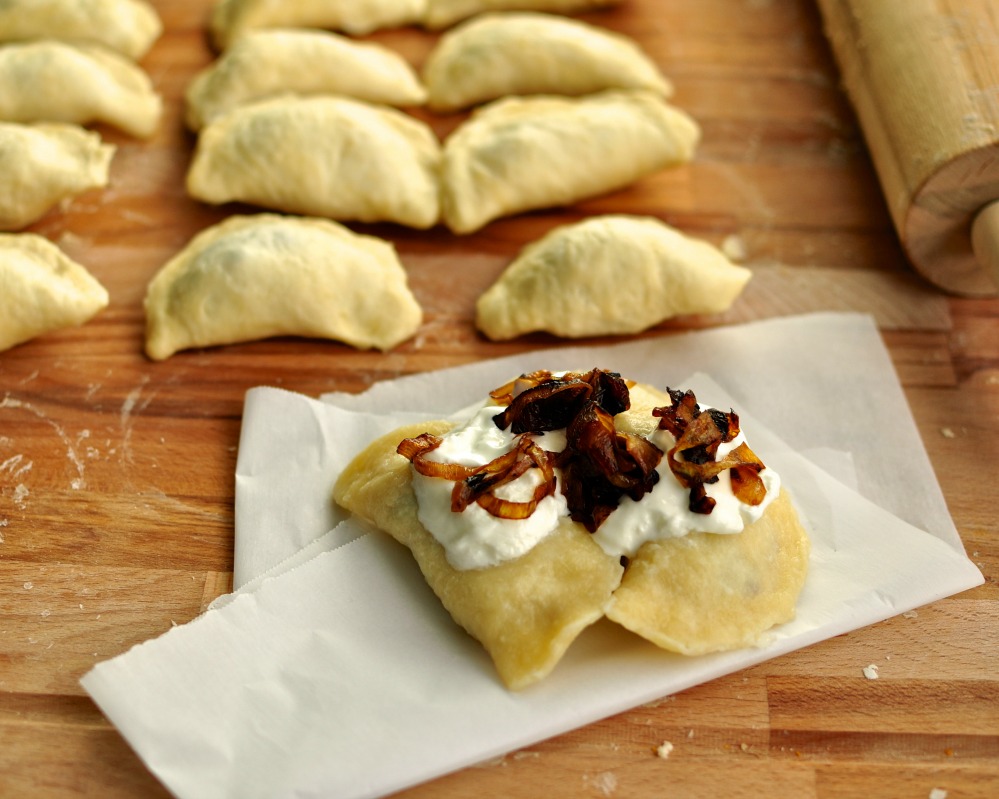 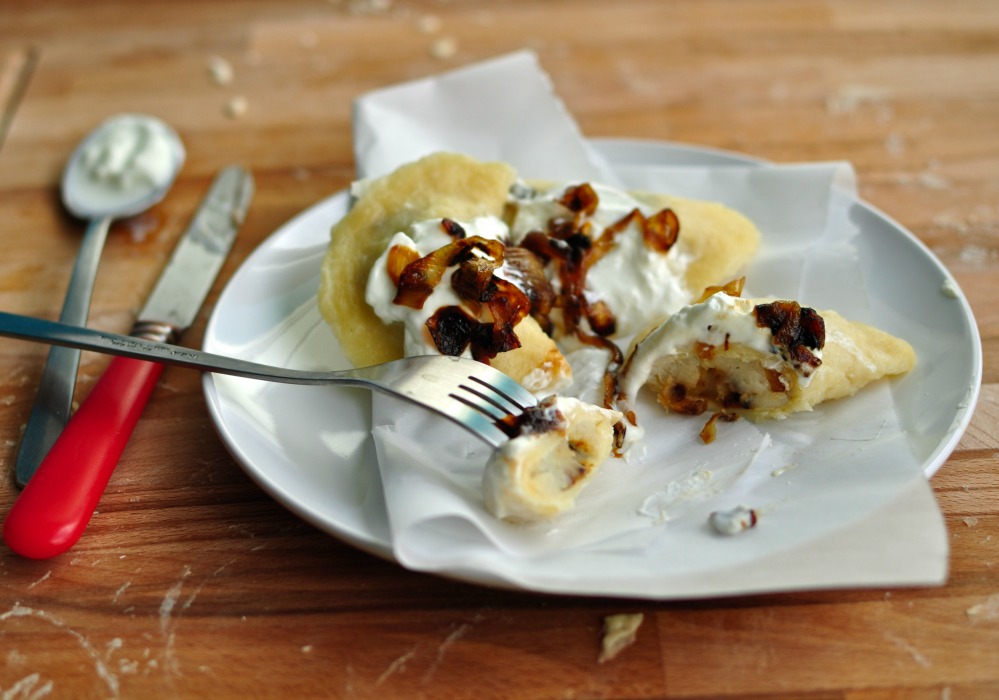 If you're boiling the verenikas from frozen, they will take about 4-5 minutes before they're ready.

In a large pan, over medium heat, melt butter and heat up olive oil.

Cook onions, stirring often, for about 45 minutes, until they are nicely browned.

Meanwhile, bring a large pot of water to a boil.

Boil potatoes until tender. You should easily be able to pierce with a fork.

Mash potatoes with 3/4 of the onions (reserving a bit for garnish), salt and pepper until the are fairly smooth. (I mash roughly and then use an electric mixer to mix until smooth).

Mix all ingredients for dough together in a bowl, with a wooden spoon.

Dump onto counter and knead for about 30 seconds, until the dough comes together.

Cover with bowl and let the dough rest for 15 minutes.

Roll out dough until 1/8 inch thick.

Using a drinking glass, cut out circles of dough (about 3 inches in diameter).

Place 1 tablespoon of filling in each piece of dough. It will look like too much filling but the dough will easily stretch to cover it.

Fold dough over and seal by pinching the edges with your fingers. Repeat until all of the dough is used up (re-rolling scraps as needed).

Bring a pot of salted water to a boil.

Boil veronicas until they float to the top of the water (about 2-3 minutes).