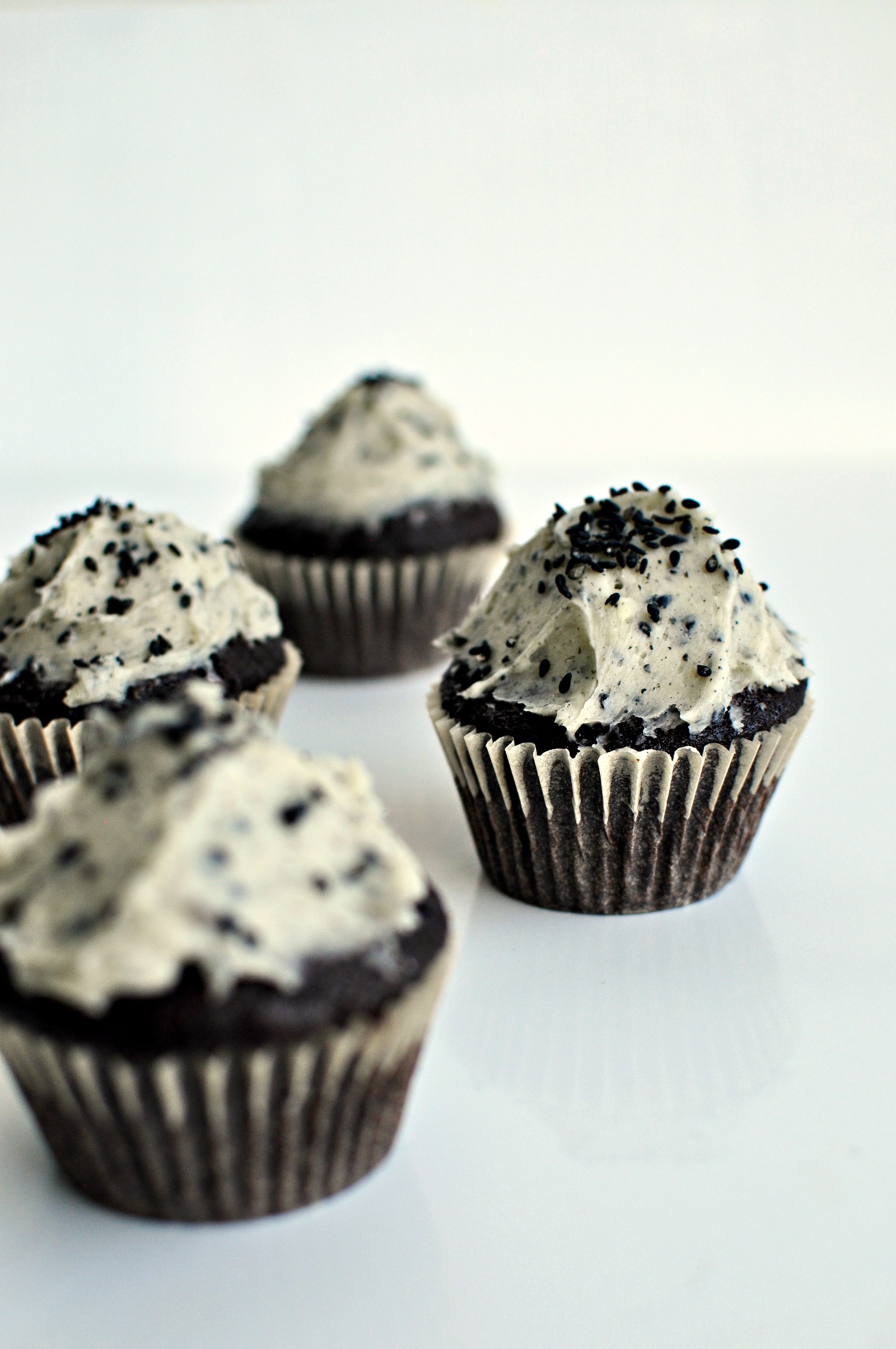 Tonight I have a surprise baby shower to go to. It’s a potluck and at first I thought I would make a salad but a few hours later, I changed my mind. I decided I wanted to make some cupcakes. As always, I love making desserts for potlucks because it is the perfect excuse to share something that I don’t really want to (well, I want to, I just shouldn’t) eat a whole batch of. On the hunt for a cupcake recipe, I went straight to one of my favourite blogs: My Name is Yeh. I have been a fan of Molly’s food photography and writing for a long time now but surprisingly, I have never actually made anything for her website. After trawling through her recipes to learn as much as I could about cupcakes, I noticed that there was a lot of consistency in the base recipe, which must mean it’s awesome right? The only other thing to figure out was some exciting flavours to use and today I’m sharing the black sesame chocolate cupcakes, later this week I’ll also share the earl grey vanilla cupcakes that I made to go with them. 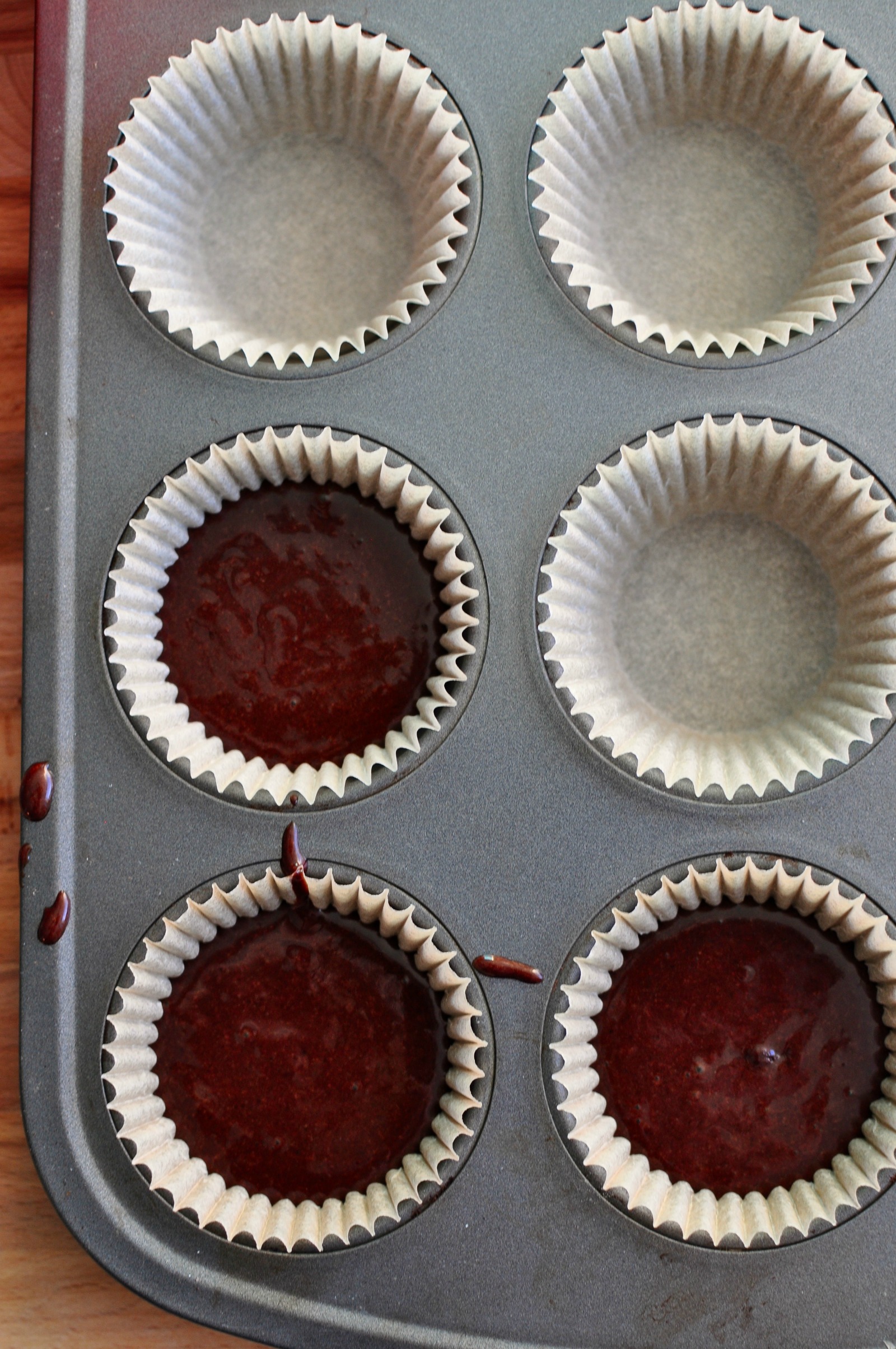 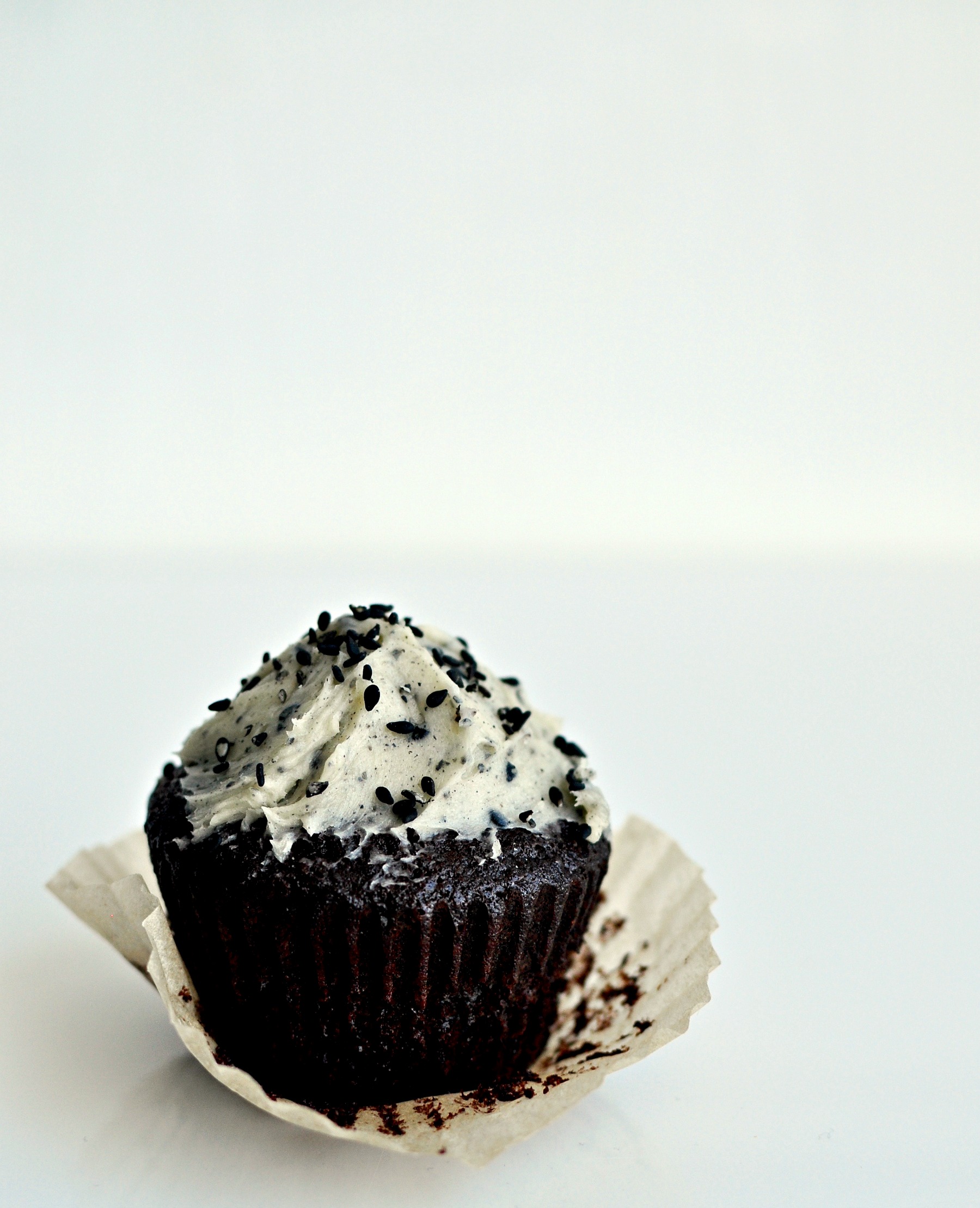 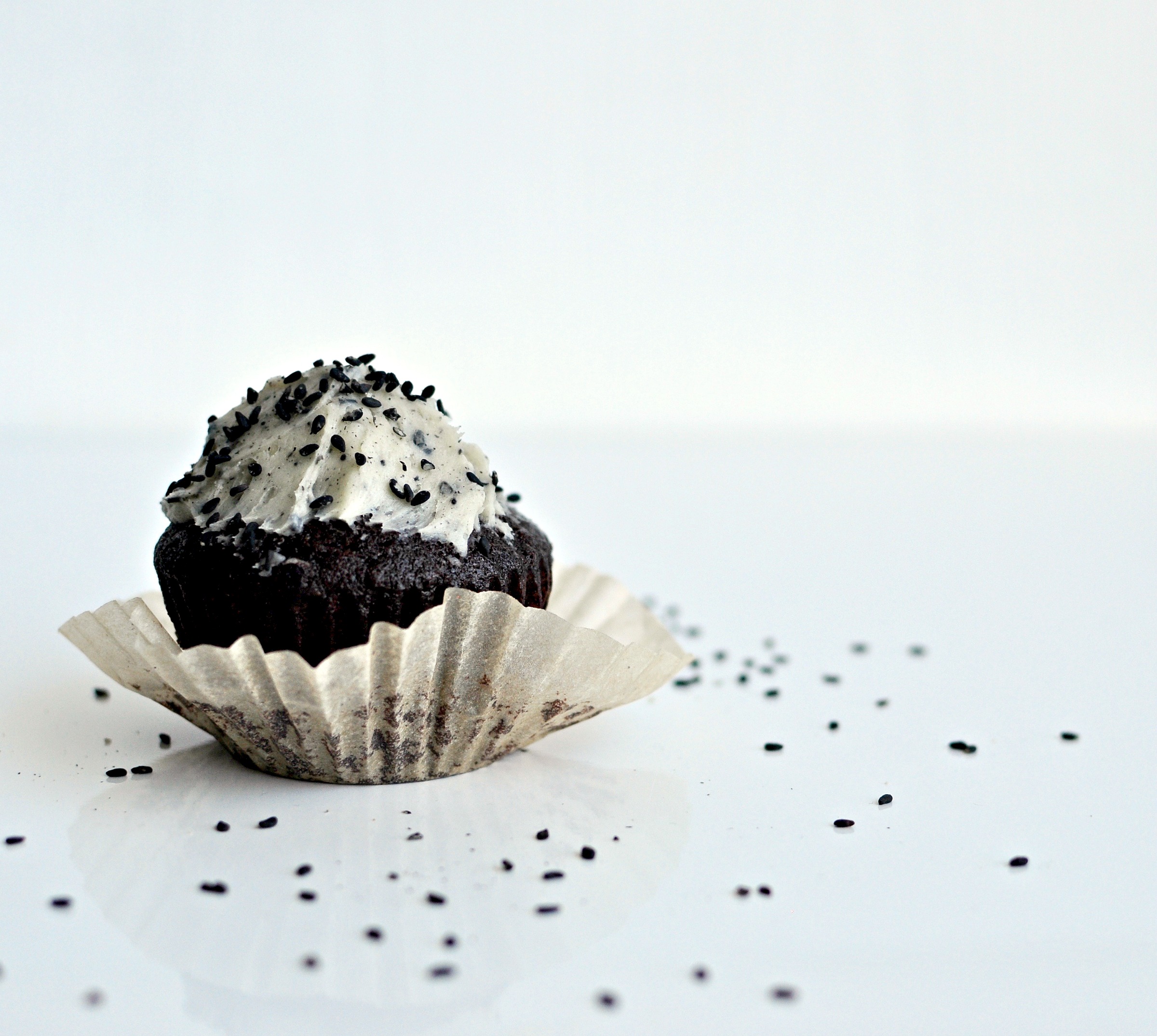 I do have two warnings for you though. First, don’t overfill the cupcake tin. There will be a tiny bit of batter leftover and you will probably be tempted (like I was) to top off each cupcake with a little extra batter. This is a mistake. The cupcakes that are too full will overflow and collapse. You should really only fill them up just over halfway. Second, frosting cupcakes is hard (any tips are welcome!). At first, I tried to ‘pipe’ the frosting in a makeshift ziplock piping bag. Needless to say, my piping skills are really under-developed, so instead, I slathered the buttercream on using a knife instead. I found the best way to do it was to start off with a thin layer of buttercream on each cupcake and then to top it up with a second layer that I would blob on and then shape with the knife. I also found that popping the icing in the fridge for a few minutes made it easier to work with. Either way, I thought the cupcakes looked great (and obviously tasted awesome), especially after I added the final garnish of black sesame on top. 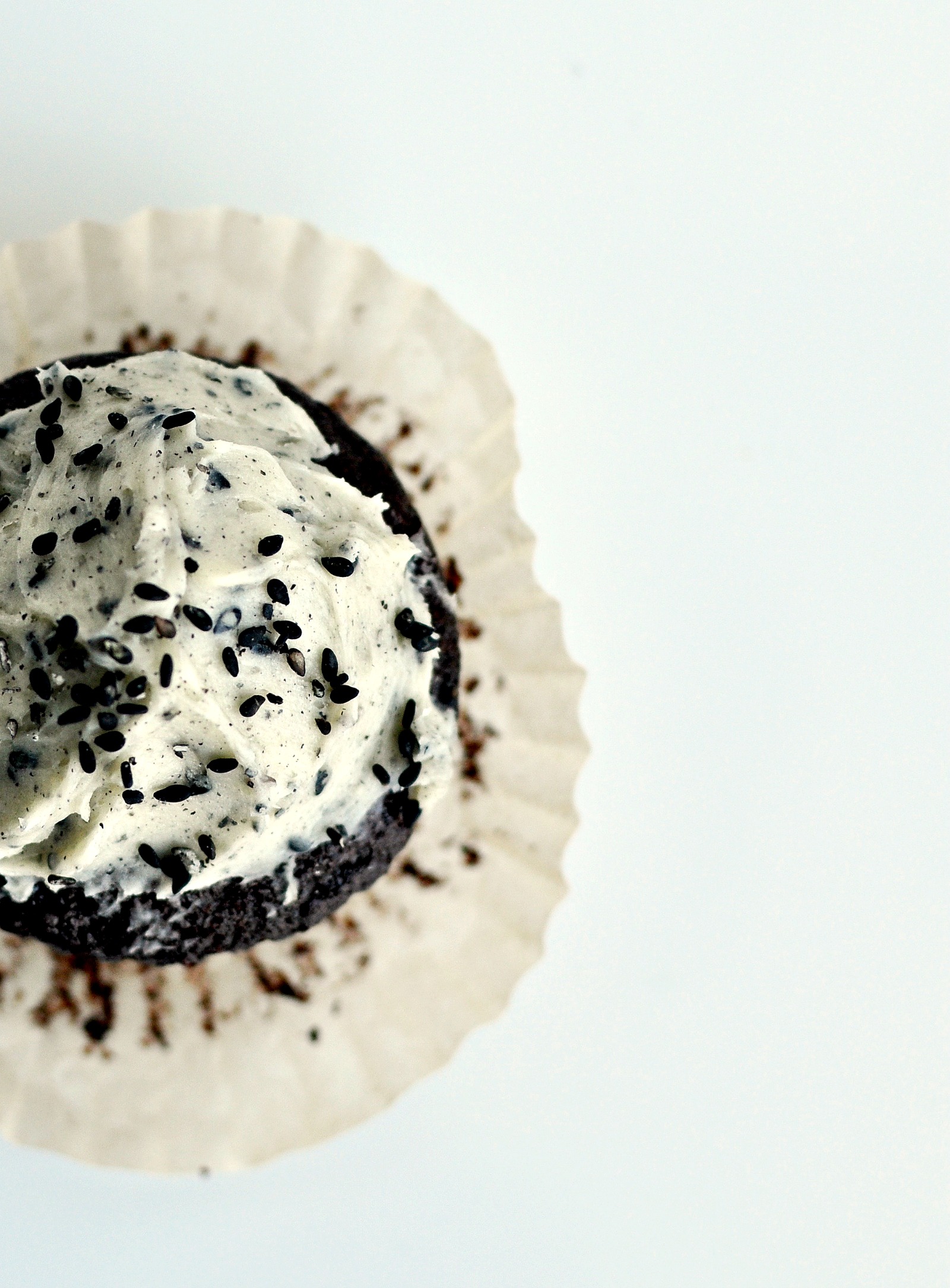 Cupcakes are a mash up of various My Name is Yeh recipes (which are partly adapted from a Magnolia Bakery recipe).

Make sure not to overfill the cupcake tins (they should only be filled a little more than halfway)! The cupcakes will overflow when they bake and collapse.

Stir boiling water into the batter.

Pour batter into cupcake tin, filling each one up only halfway.

Bake for 15-20 minutes (a toothpick should come out clean).

Let cool for 10 minutes in the pan and then place on a wire rack until completely cool.

Use an electric mixer to beat all of the ingredients together.

Once the cupcakes are cool, use a knife to slather on the frosting. I liked putting a thin layer of frosting first and then adding a second layer to build it up into a nice shape.