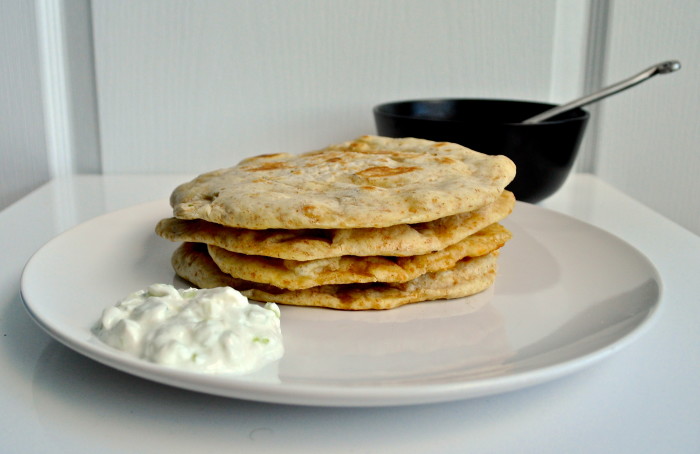 I love tzatziki. It’s the perfect combination of garlicky, creamy, fresh goodness that’s just being asked to be eaten by the spoonful. While I think that my tzatziki is pretty killer on its own, I can’t get away with eating a bowlful of it for dinner. The first thing I think of when I think of tzatziki is a vegetarian gyro, and I figured, why not make the pita from scratch as well. I have debated making pita from scratch in the past. For some reason, when we lived in Vancouver I couldn’t find what I consider to be ‘normal’ pita anywhere (the thin kind that doesn’t have tons of bread in the middle). Instead we just went pita-free for a couple of years. 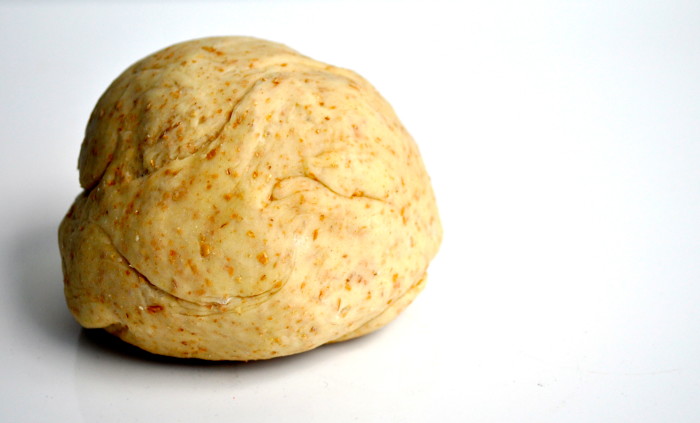 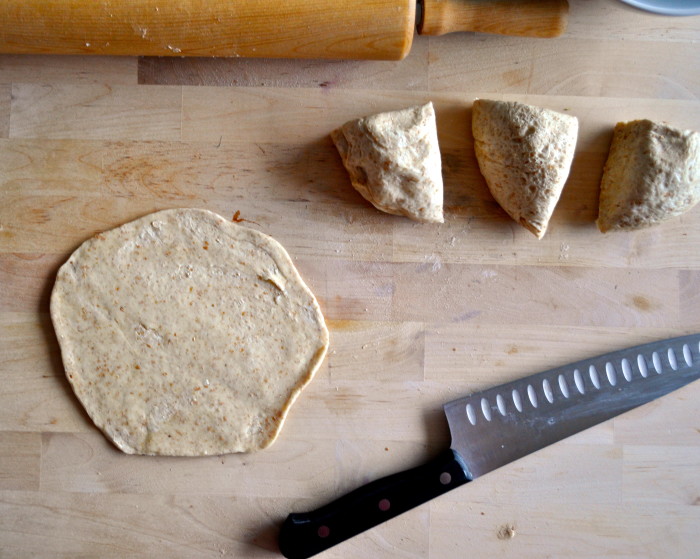 Now that pita is readily available I decided to make it at home. Makes sense right? Whether it makes sense or not, I was totally keen on making the pita at home instead of going to the store. I guess that’s what happens when you have to drive everywhere? In the end, they turned out pretty great. I kind of burned the first one. It felt like the same issue that plagues pancakes, the first one is always messed up because you don’t have the temperature of the pan exactly right. After that one though, it was so satisfying to watch the breads bubble and puff up in just 3 minutes. 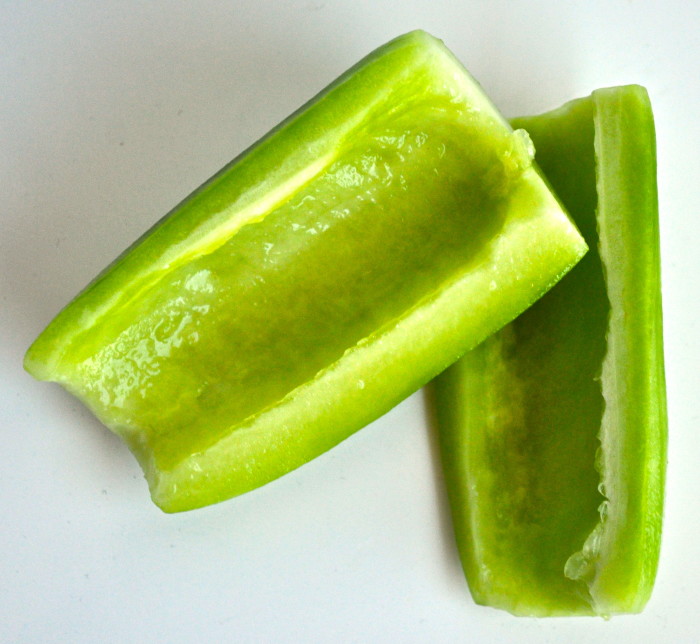 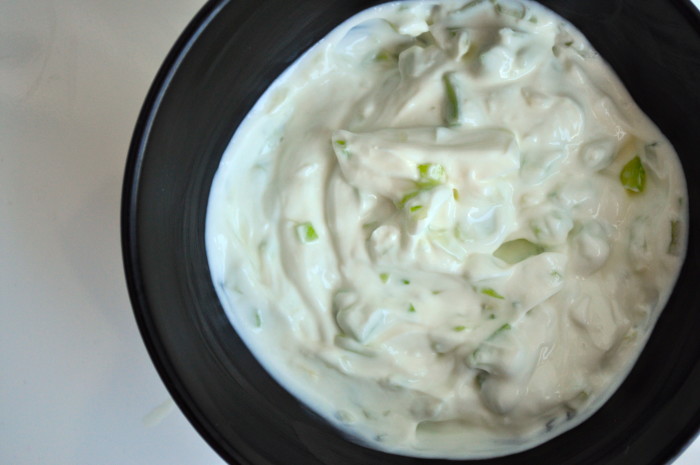 Despite the deliciousness and freshness of the pita, if you can get your hands on some good stuff go right ahead, but please make this tzatziki. It is so easy to make. Personally, I always have all of the ingredients on hand and it takes about 5 minutes to throw together. It’s lemony, garlicky and creamy. It gave this sandwich a punch of flavour and we were more than happy to eat the leftover pitas plain with the dip. It’s just so good. 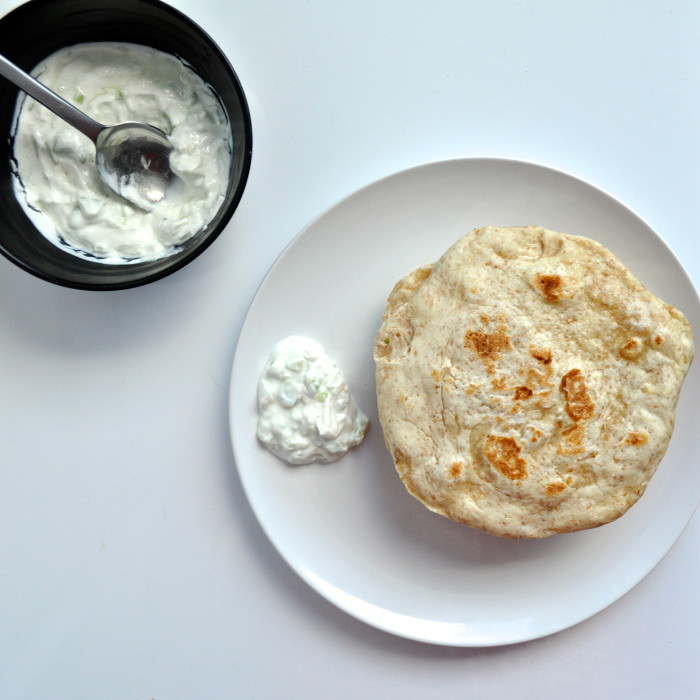 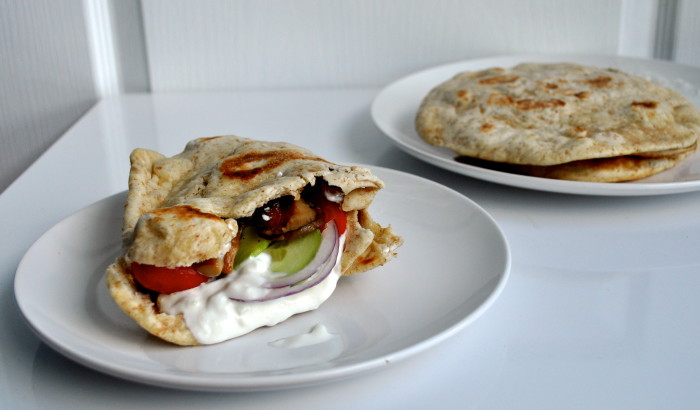 Adapted from pita recipes on theKitchn and Smitten Kitchen

The tzatziki has a strong garlic flavor. If you aren't the biggest fan of garlicky food, add half of the amount and adjust according to your taste.

This wrap would be wonderful with chargrilled shrimp or some feta.

It is possible to make these pita in the oven. I read that pitas in the oven will puff up more but pitas in a pan will get more golden-brown. I didn't want to turn the oven on, but if you'd rather go for that method, cook pitas for 3-4 minutes at 475 degrees Fahrenheit.

In a medium sized bowl, dissolve the yeast into the warm water. Add flours, salt, and olive oil and stir with a wooden spoon until a shaggy dough has formed.

Kneed dough until smooth, about 10-12 minutes. If the dough is too dry add a bit of water (1 teaspoon at a time).

Place dough in bowl, cover with plastic wrap and place on a countertop to rise. Once the dough has doubled (about 1.5-2 hours) place in fridge until you are ready to cook your pitas.

In a small bowl, combine all of the ingredients for the tzatziki.

In a medium skillet add olive oil and smashed garlic clove. Fry garlic for about 1 minute and then add red peppers, skin side down. Season with salt and pepper.

Add 2 cups of oyster mushrooms and cook until golden brown.

Set vegetables aside. You will heat them up before assembling the sandwich.

Divide your dough into 4 equal parts. Roll out each pita until it is about 1/4 inch thick (they will be about 6 inches in diameter).

Heat up a skillet on medium heat and lightly oil the skillet. Lightly sprinkle water on each side of the pita as it is cooking (moist dough is more likely to puff up).

You should make sure that the dough starts to bubble before flipping it.

The pitas will take about 1 1/2 minutes on each side.

Cook until puffy and golden