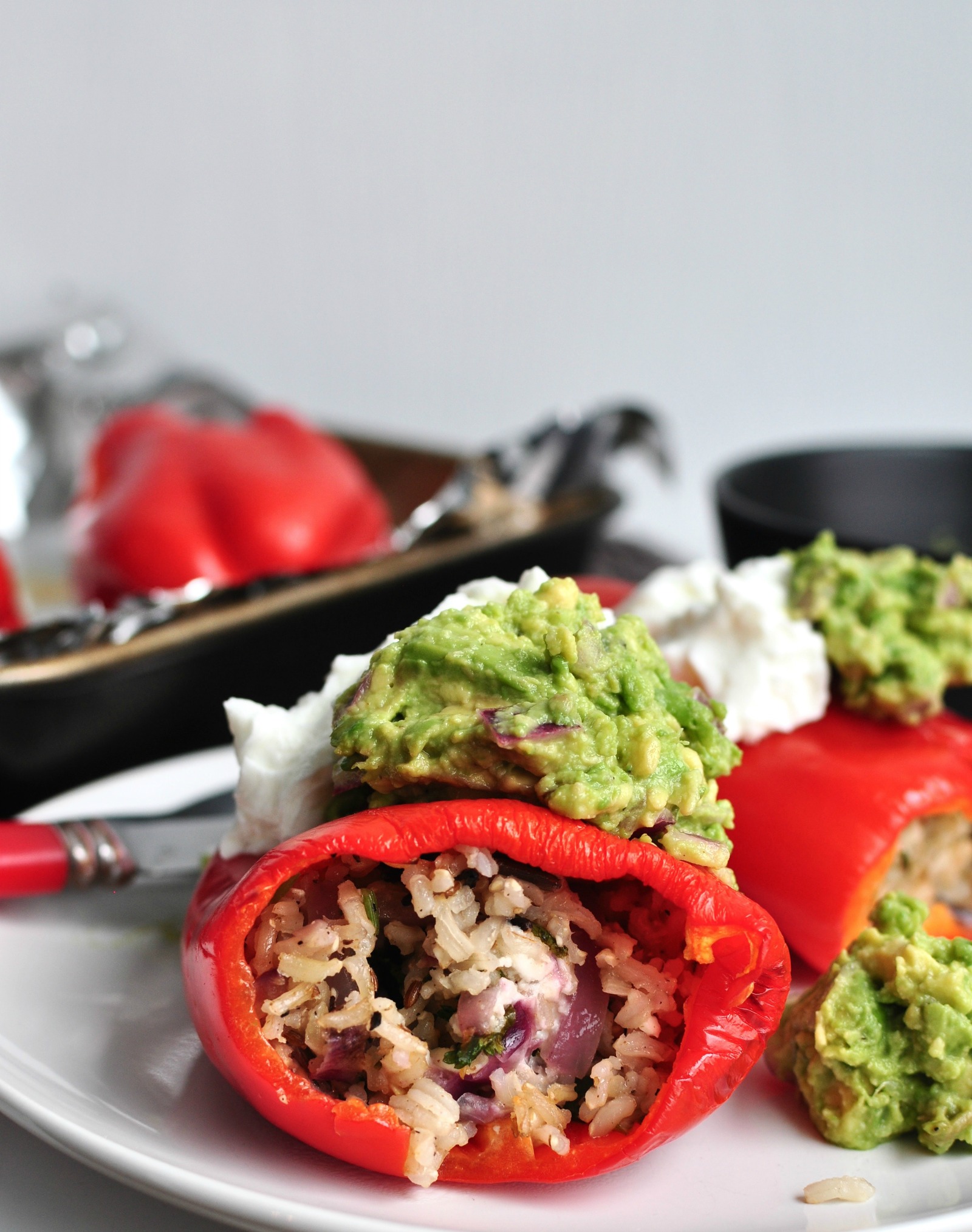 I bought a bunch of red peppers a few weeks ago to make fajitas. Unfortunately, I got home and realized I didn’t have any tortillas. There was no way that I was going back to the store, so I set my mind to figure out what I could do with the ingredients I had at home. Somehow, stuffed red peppers came to mind. I had the rice, the feta, the guacamole, the sour cream and the peppers, it was perfect! In the end, the missing tortillas was a blessing in disguise. I hadn’t ever made stuffed peppers. In fact, I rarely even bought red peppers. Now, they are a whole new meal under my belt, which I am very thankful for. They are healthy, filling, and easy to make. They’re even pretty quick to throw together if your rice is already cooked: a great weeknight, vegetarian meal. 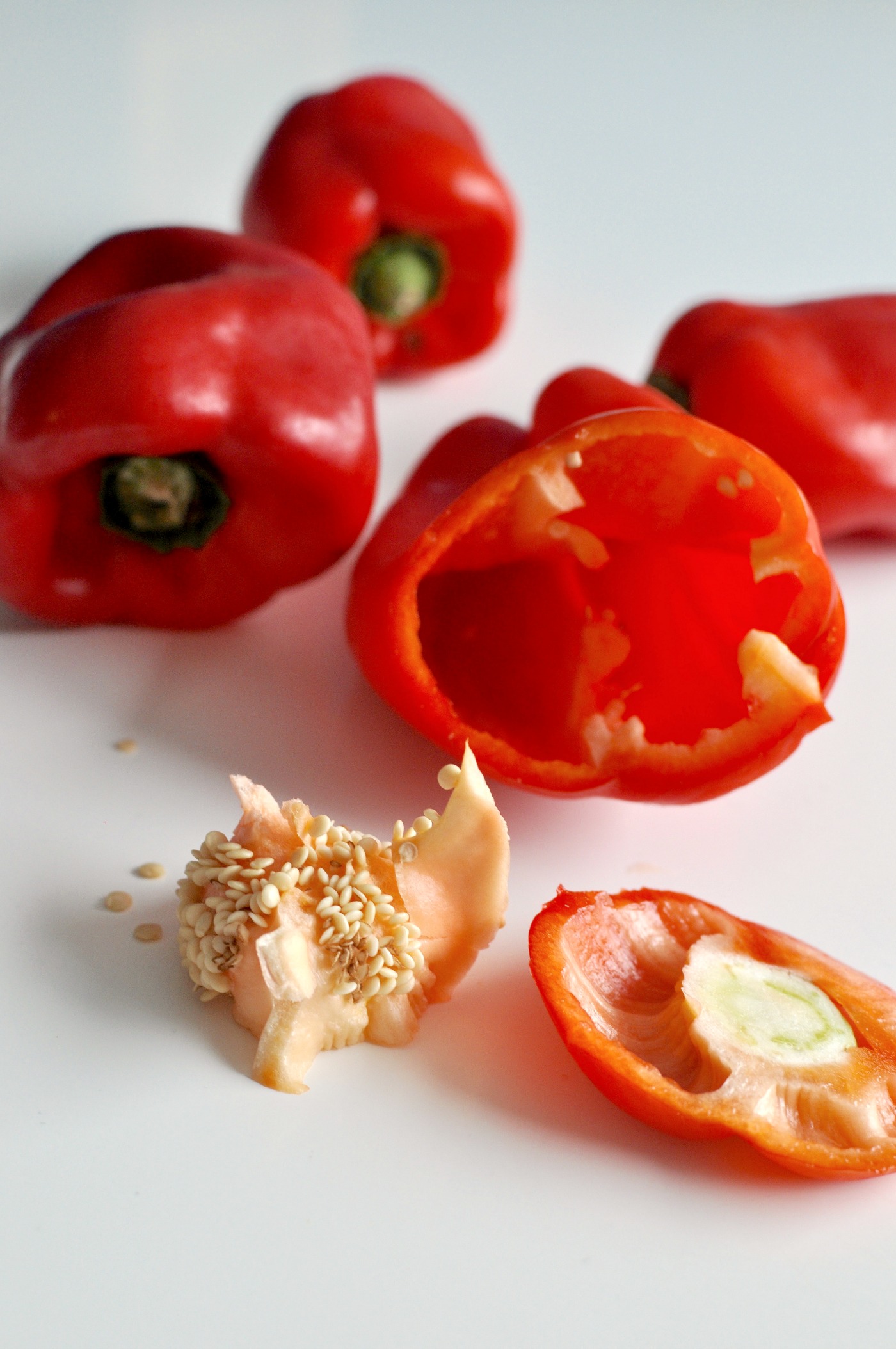 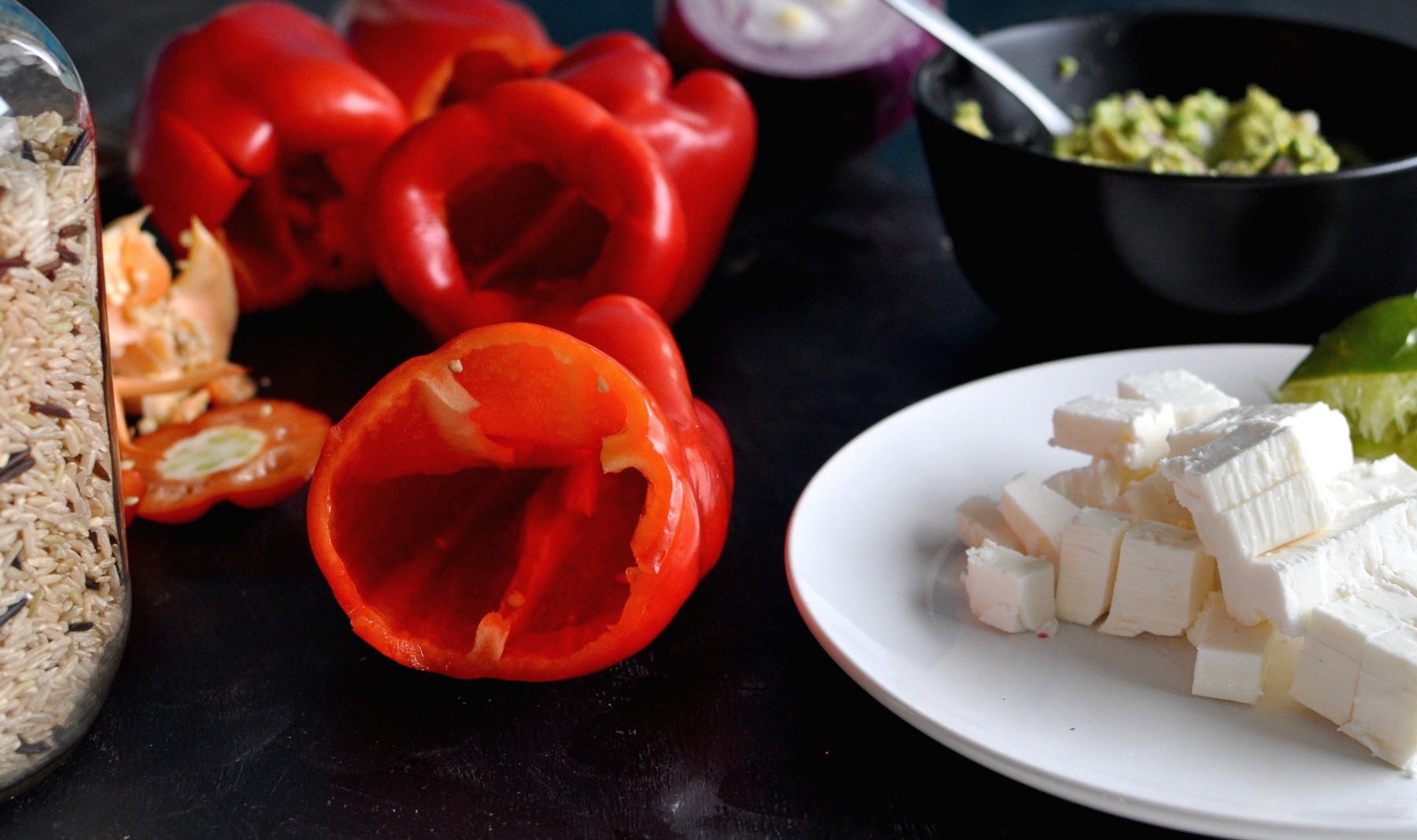 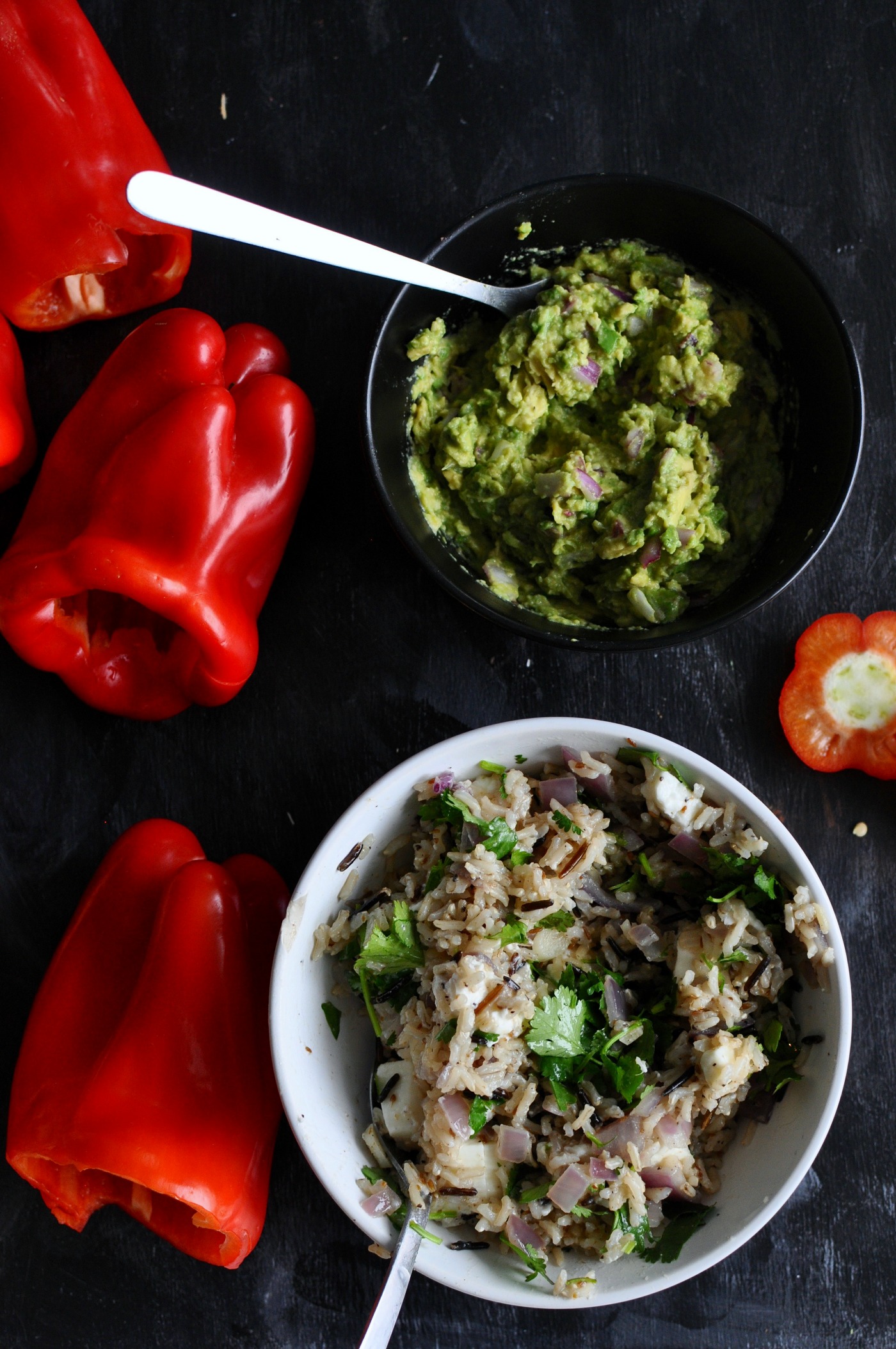 I love these peppers for a lot of reasons. The red peppers get beautifully sweet, softened and slightly charred in the oven. The filling is perfectly, simply seasoned with a good amount of salt, pepper, some cumin and fresh cilantro for some extra flavour. The feta adds a melty, creamy, extra salty element that is always a winner in my books. I’ve also added black beans to the filling in the past, which is delicious if you’re looking for something a little different. You can also easily add a few other vegetables to the filling (I think some chopped spinach or sautéed mushrooms would be great) but as it is, it is a very tasty, simple, filling dinner that is perfect with a green side salad. 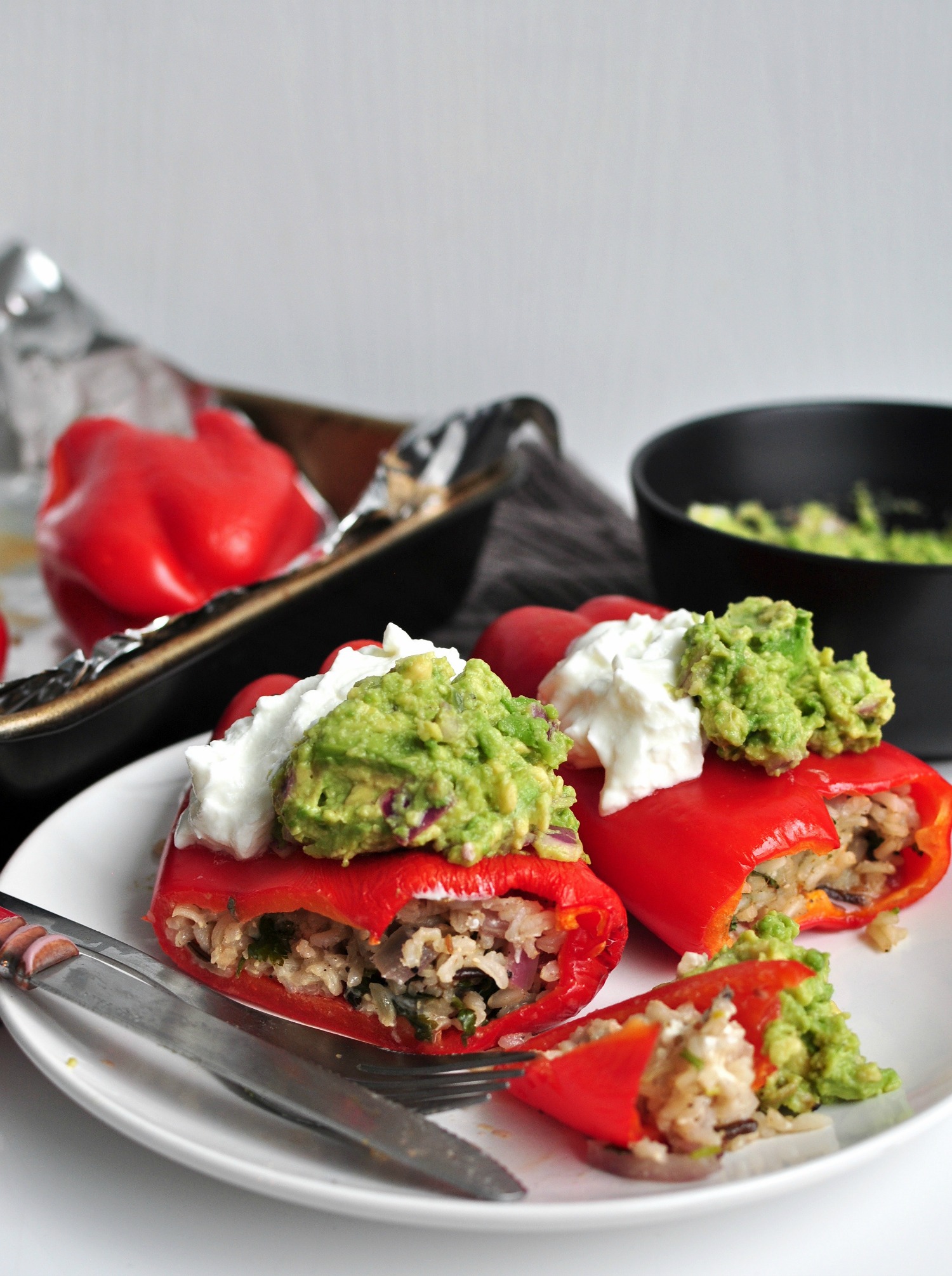 Depending on how big your peppers are, you may have some extra filling.

It's fine to stand your peppers up or lay them on your sides (my peppers didn't have a wide base so I lay them down when they cooked).

Remove the stems and seeds from your peppers and set aside.

In a small pot, cook your rice according to the instructions on the package.

When it's cooked, remove rice from the pot and place in a medium bowl.

In the same pot, add a splash of neutral oil and turn the heat to medium-high.

Saute the garlic, onion, and cumin until softened (about 3-4 minutes).

Mix the rice in with the garlic and onion mixture. Taste and season with salt and pepper.

Transfer back to the bowl and let the filling cool down a bit.

Mix in cilantro and feta.

Spoon the mixture into the peppers, pressing down so they are completely full.

Bake peppers on an aluminum lined baking tray for 25-30 minutes until the peppers have softened and can easily be pierced with a fork.

Remove from oven and serve with guacamole and sour cream.

Mix all ingredients together in a bowl. Taste and season with extra lime and salt.