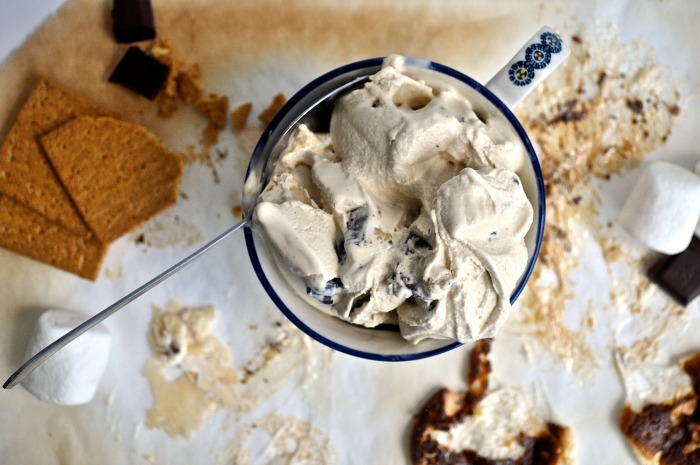 Last weekend I went camping for the first time ever. We went to Waterton Lakes National Park, which is about three hours south of Calgary. There were a lot of things that stand out to me when I think of the trip. On the negative side, it was extremely windy (we were convinced our tent would be blown away with us in it our second night) and cold and slightly rainy. On the positive side, the natural surroundings were beautiful. I still can’t get over how incredible the rockies are. It was wildflower season so there was tons of colourful flowers in bloom. And, most importantly, after three years of living out west, we finally saw some bears! An adult with three cubs to be exact. They walked right in front of our car. It was amazing. We also saw a bison up close and a moose. Does it get any better than that? 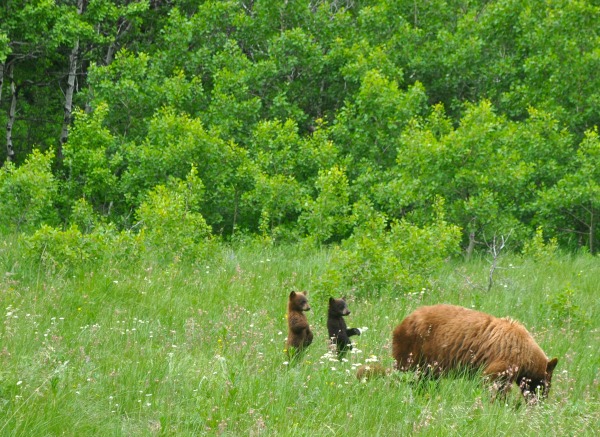 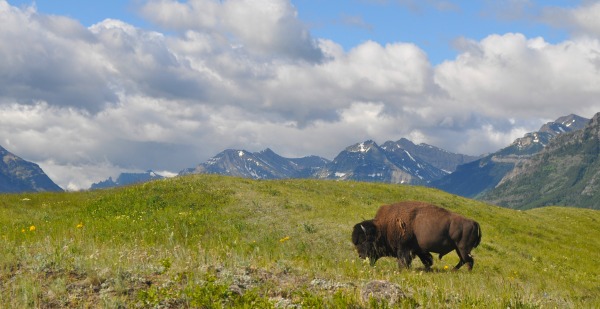 Aside from all of the natural wonders, we also went with some lovely (and savvy) friends who know how to build a fire (we killed it three times, but they thankfully brought it back to life). Fire = s’mores in camping land, so we were tasked with bringing the ingredients for the classic treats. We were a little over-zealous and bought more than double the amount of marshmallows, chocolate and graham crackers than we needed. While I could definitely demolish the chocolate in a week or so, the marshmallows and graham crackers are not dietary staples around these parts. So, what better thing to do with them than to turn them into s’mores ice cream? 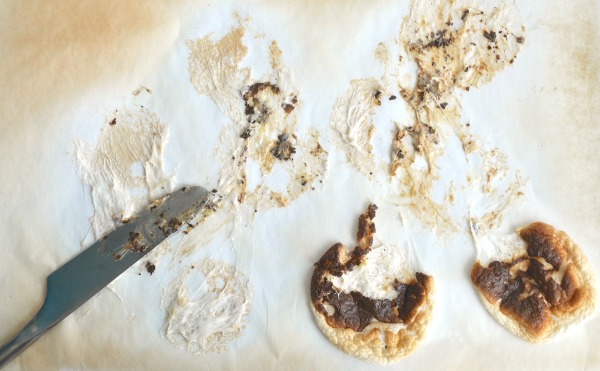 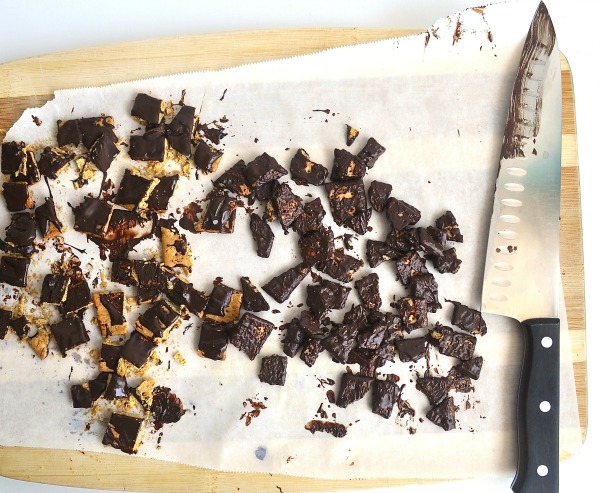 For me, the most important part of this ice cream was to make sure that the marshmallow ice cream base wasn’t too sweet and had a definite toasted flavour. It worked! The key is to broil the marshmallows until they are super dark, borderline burnt. They cook in the oven really, really fast so just keep an eye on them and it’ll be fine. I also liked the idea of coating the graham crackers in the chocolate instead of just putting in chunks of both separately, it reminded me more of a s’more that way.

In the end, the ice cream base is toasty and not overly sweet at all and the graham crackers are crunchy and chocolatey. This is definitely the best way to eat your s’mores on a hot summer day. 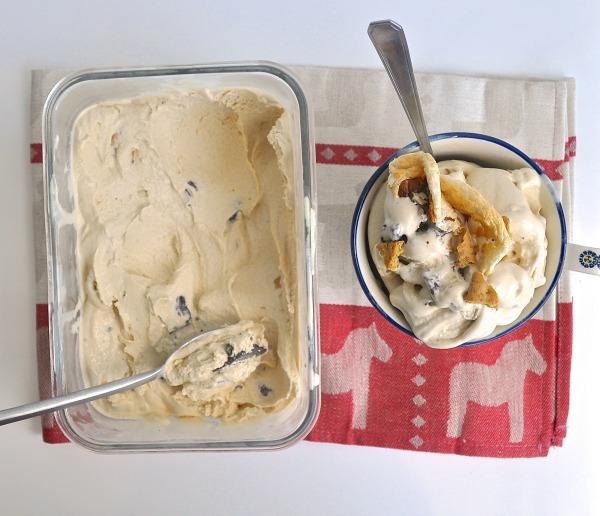 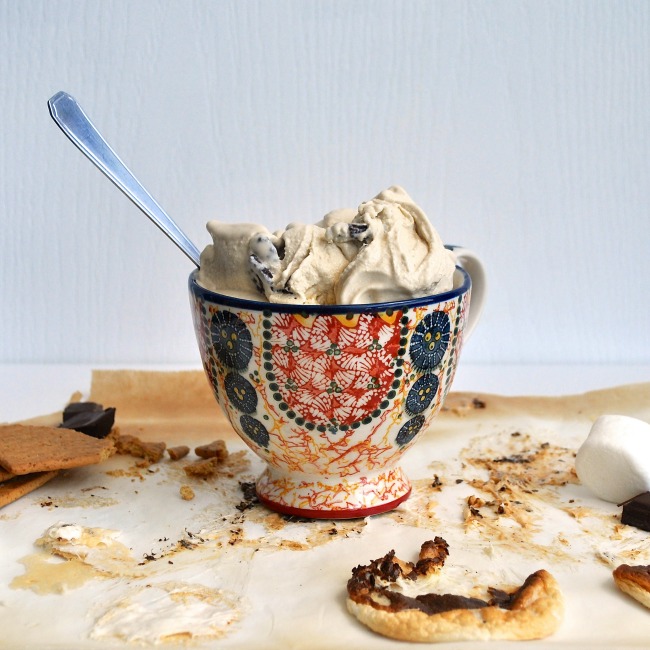 If you want to add some chunks of toasted marshmallows to the final product, add two extra marshmallows in the oven and add chunks of them in to the ice cream along with the chocolate graham crackers.

The marshmallows are definitely very sticky when they are straight from the oven. Either you can use a knife to scrape them off of the parchment paper or you can wait until they are completely cool and they will come off super easily.

Preheat oven to 450F on broil. When the oven is ready, place marshmallows on a parchment lined baking sheet into the oven for a few minutes. Watch carefully because they will colour quickly (you want them just on the line between toasted and burned for the toasted flavour in the ice cream).

While you're waiting for your oven to heat up, in a small pot, heat up 1% milk, sugar, and salt, stirring until sugar dissolves.

In a medium bowl, whisk egg yolks until they start to turn light in colour.

Slowly add the warmed milk mixture to the eggs, whisking all the time (need to add a bit at a time so that the eggs don't curdle).

Once the milk is fully incorporated into the eggs, return the mixture to the pot and heat over medium heat, stirring, until thickened. The mixture should coat the back of a spoon and hold a line.

Put toasted marshmallows with some of the custard in a blender and blend until smooth.

Put in fridge to cool down for at least 4 hours. If you want to speed up the cooling process, you can place the bowl with the ice cream mixture into an ice bath and stir (it will still take a few hours to fully cool down though).

While it's cooling, make chocolate covered graham crackers (recipe below)

Make ice cream in ice cream machine, according to manufacturer's instructions. Five minutes before the end of the churning process, add chocolate covered graham crackers so that they are incorporated into the mixture.

Transfer to a freezer-safe container and freeze for a couple of hours for it to completely firm up.

Lay in one layer on parchment paper (or they will clump up as they cool) to cool. Set aside.