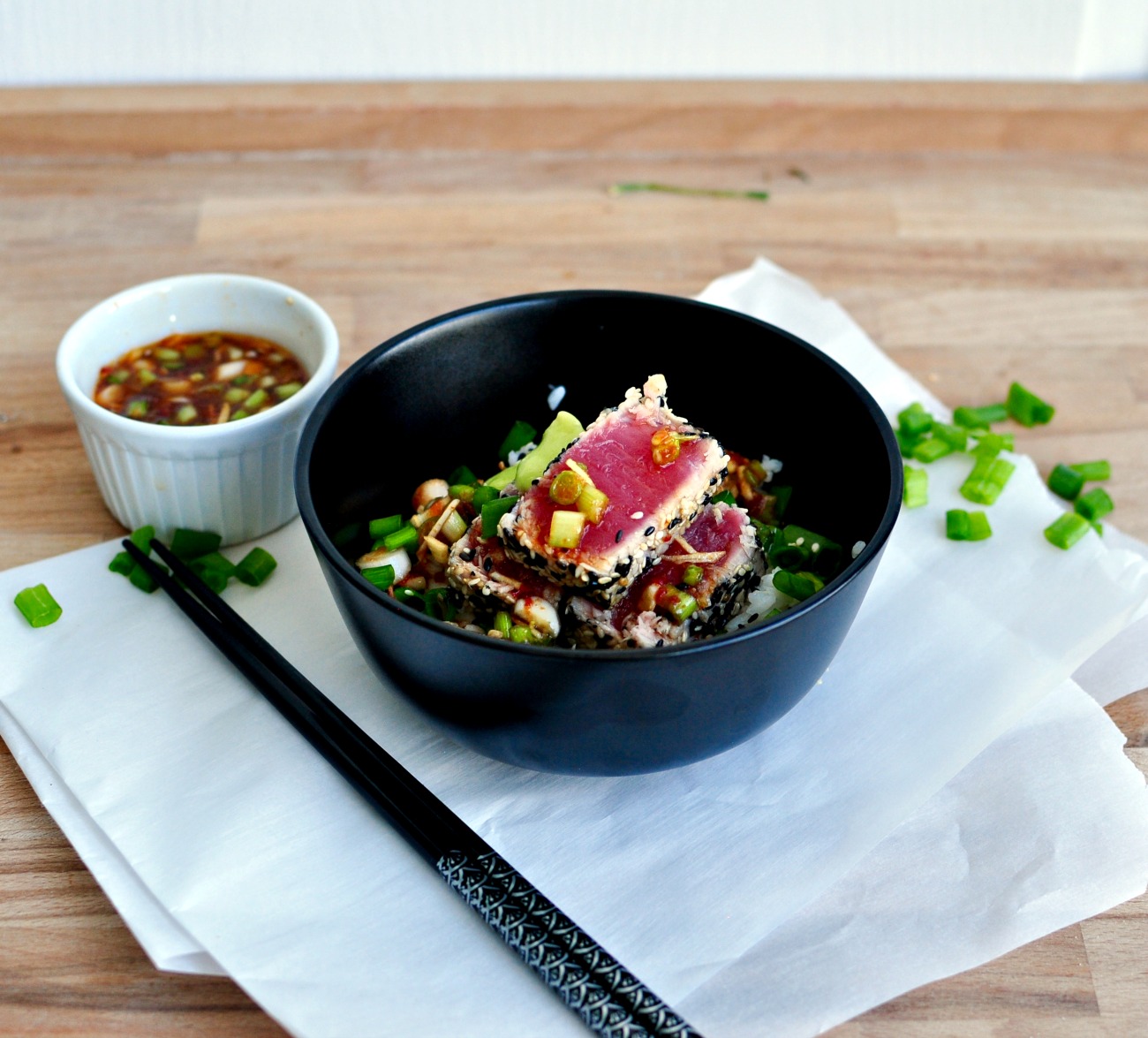 A few months ago, I bought fresh tuna for the first time. We never really saw it at the grocery store before and when we did, we were intrigued to try it out. Because it was a beautiful piece of fish, I wanted to cook it super simply: crusted in black and white sesame seeds, seared and served over rice with some sesame sauce and vegetables. It was delicious. And, for a meal that feels so special, it was crazy how simple and fast it was to pull together. Everything was ready to go by the time rice was done cooking. A perfect weeknight dinner. So, last week, when I saw some more good quality tuna at the store I figured it was time to make this sesame seared tuna bowl again. 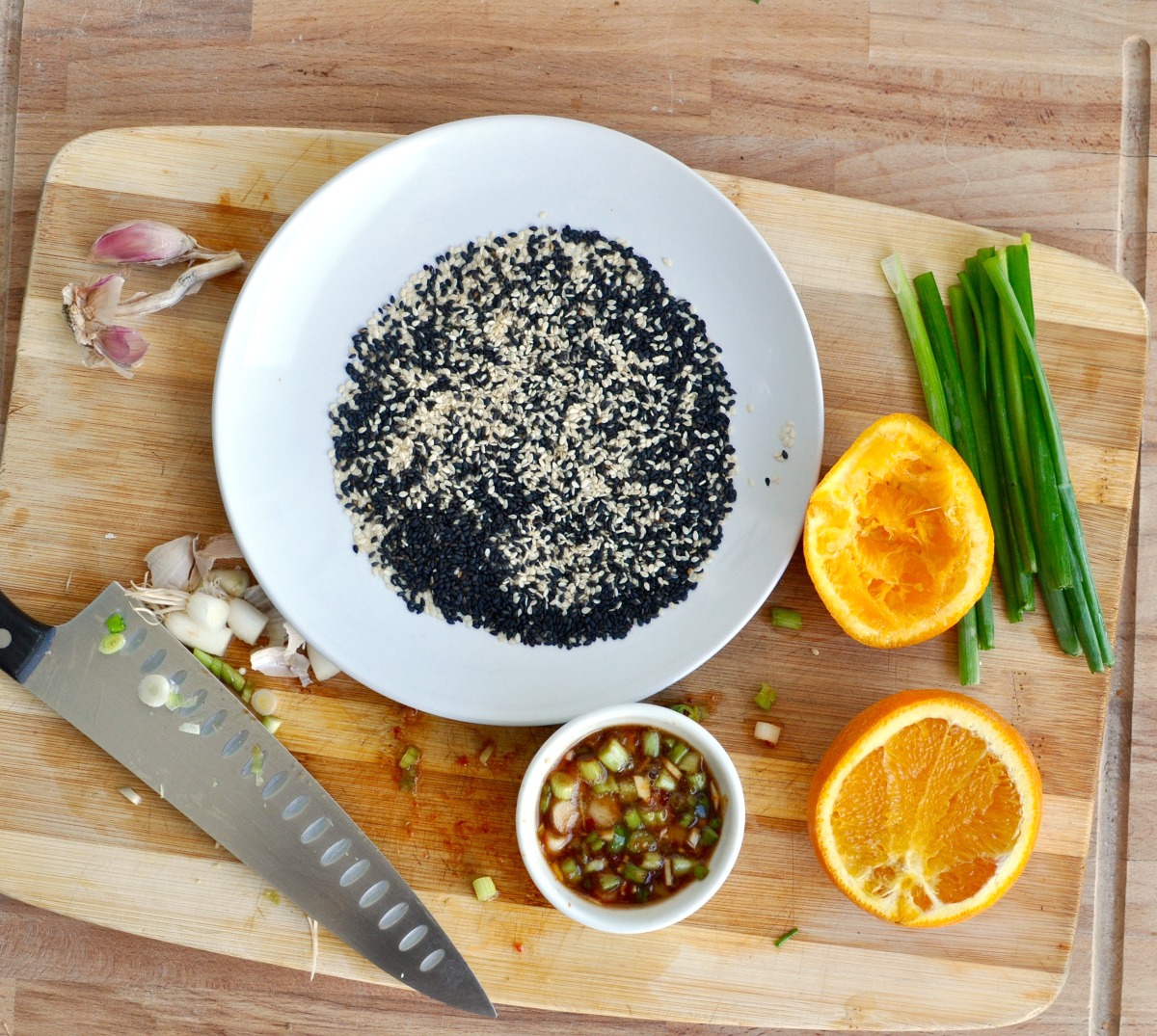 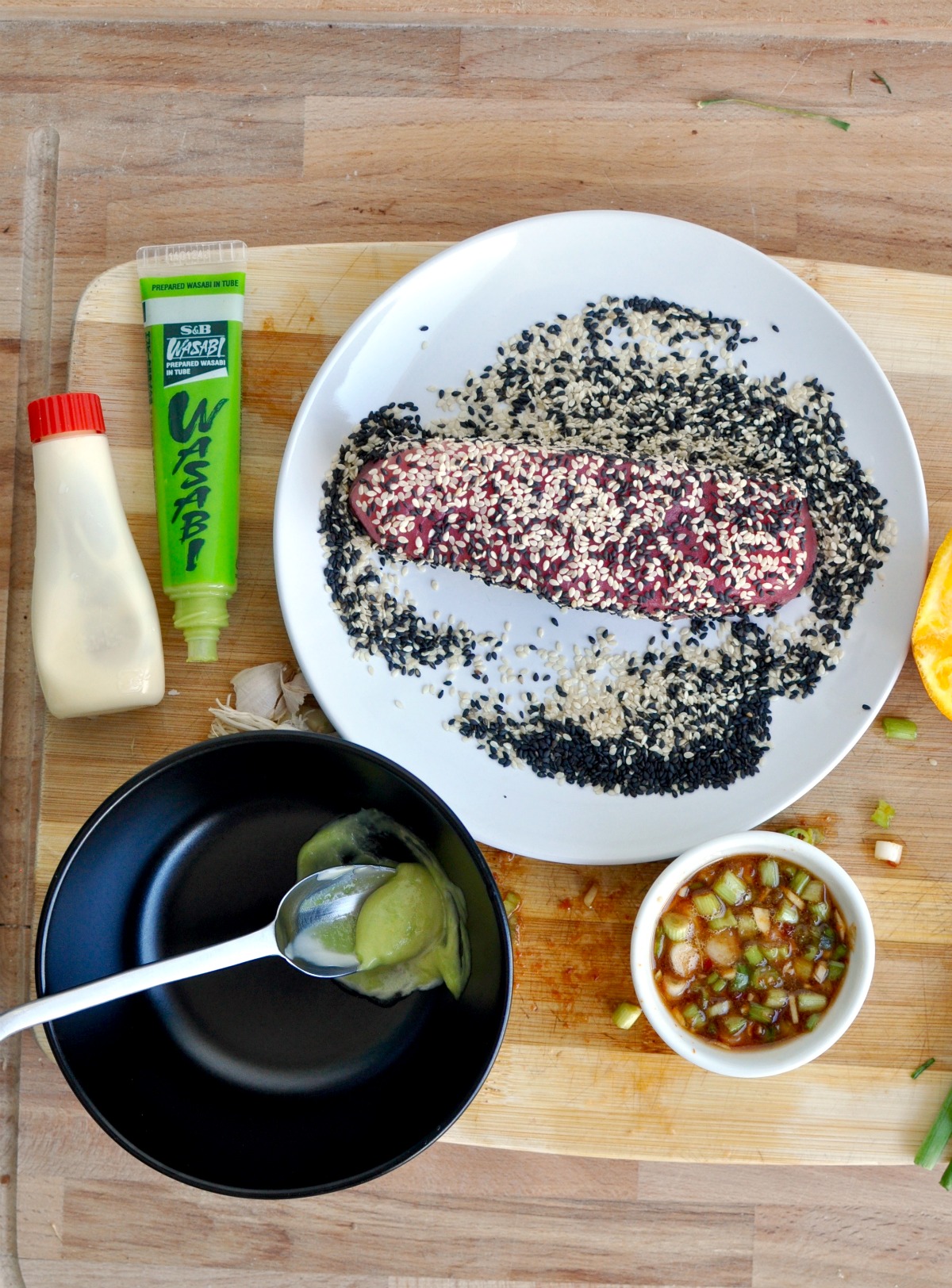 Since the last time I made the dish, we were lucky enough to visit Hawaii where fresh tuna and seafood is everywhere. At one small restaurant, we both had a wrap that was filled with seared tuna, nori, rice and wasabi cream. The wasabi cream gave everything a kick and brightness that cuts through the rice and fish which are always pretty simple. So, this time around I made sure to make some too. It’s a super east combination of equal parts of wasabi and kewpie mayonnaise, a Japanese mayonnaise that is a bit sweeter than the mayonnaise I’m used to, but you can easily replace it with what you have on hand. 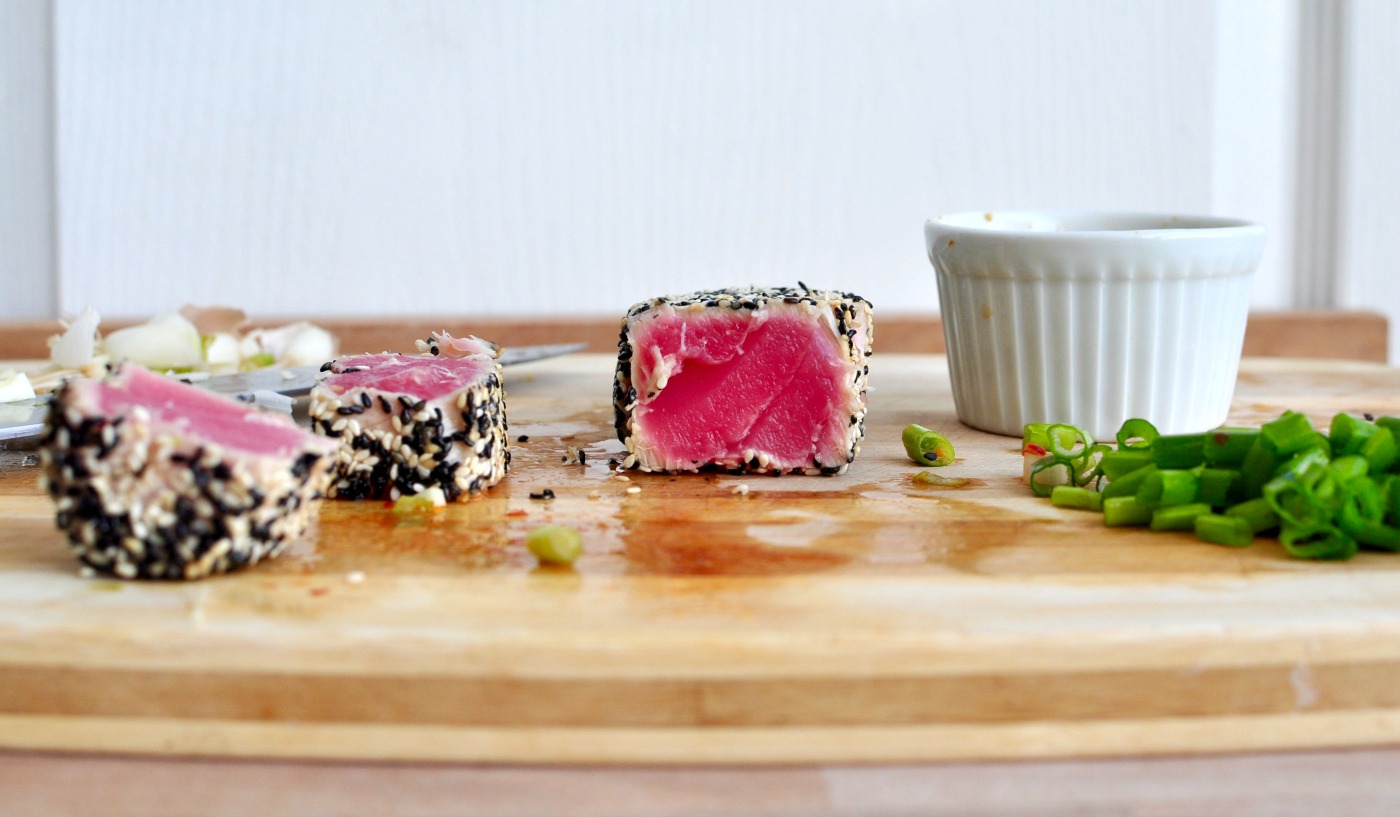 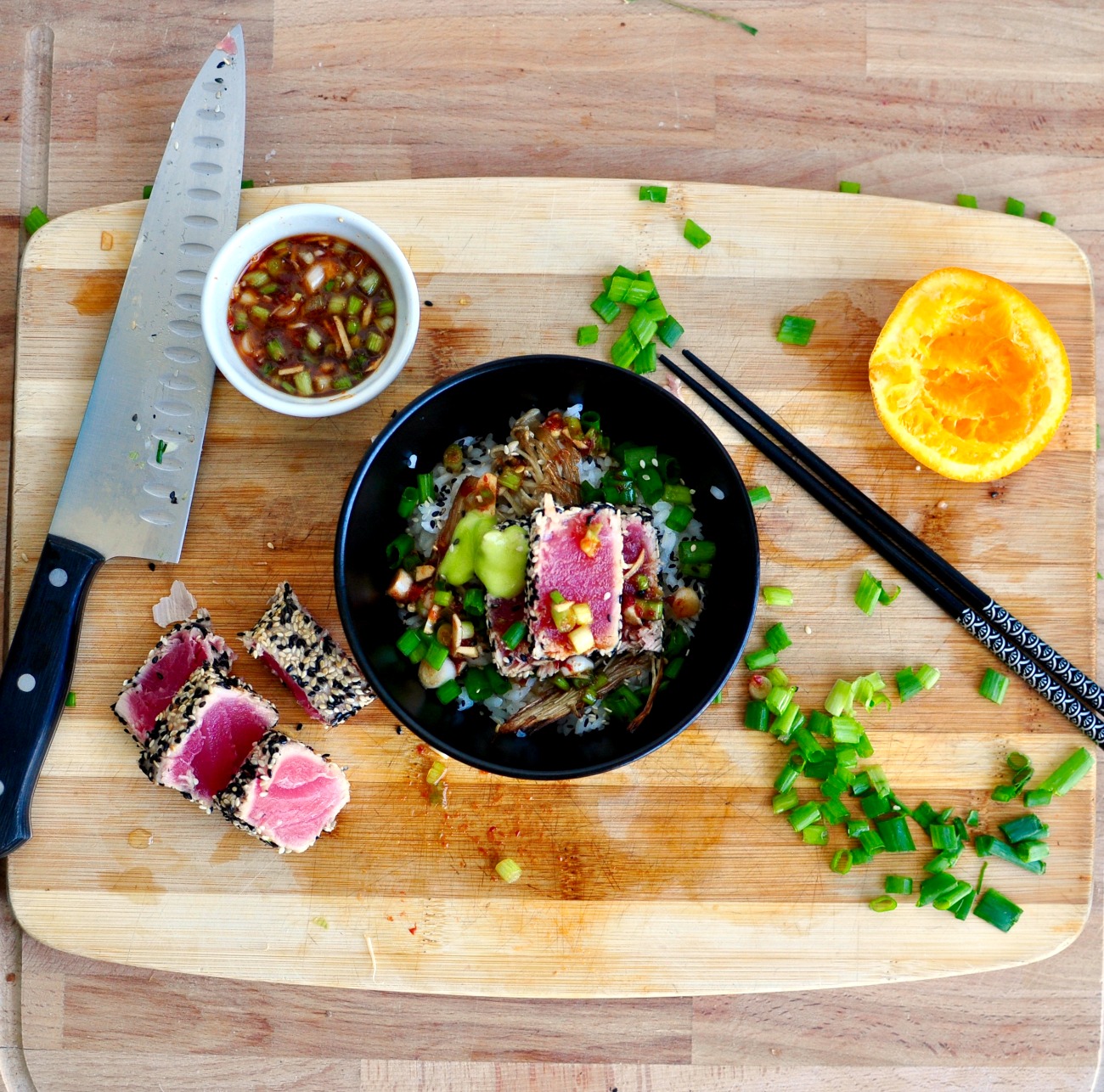 This tuna bowl is filling from the rice, fresh from the tuna, and has some nice texture with the crunchy edges of the browned enoki mushrooms. The sweet, sesame dressing that coats everything and the pop of spicy wasabi that hits you right in the nose every few bites makes this special. You can easily add different vegetables to this (I think edamame, shredded fresh carrot, daikon, and creamy avocado would all be great) and probably even top it with some baked tofu for a vegetarian version that still has the beautiful sauces and play on sesame flavours. 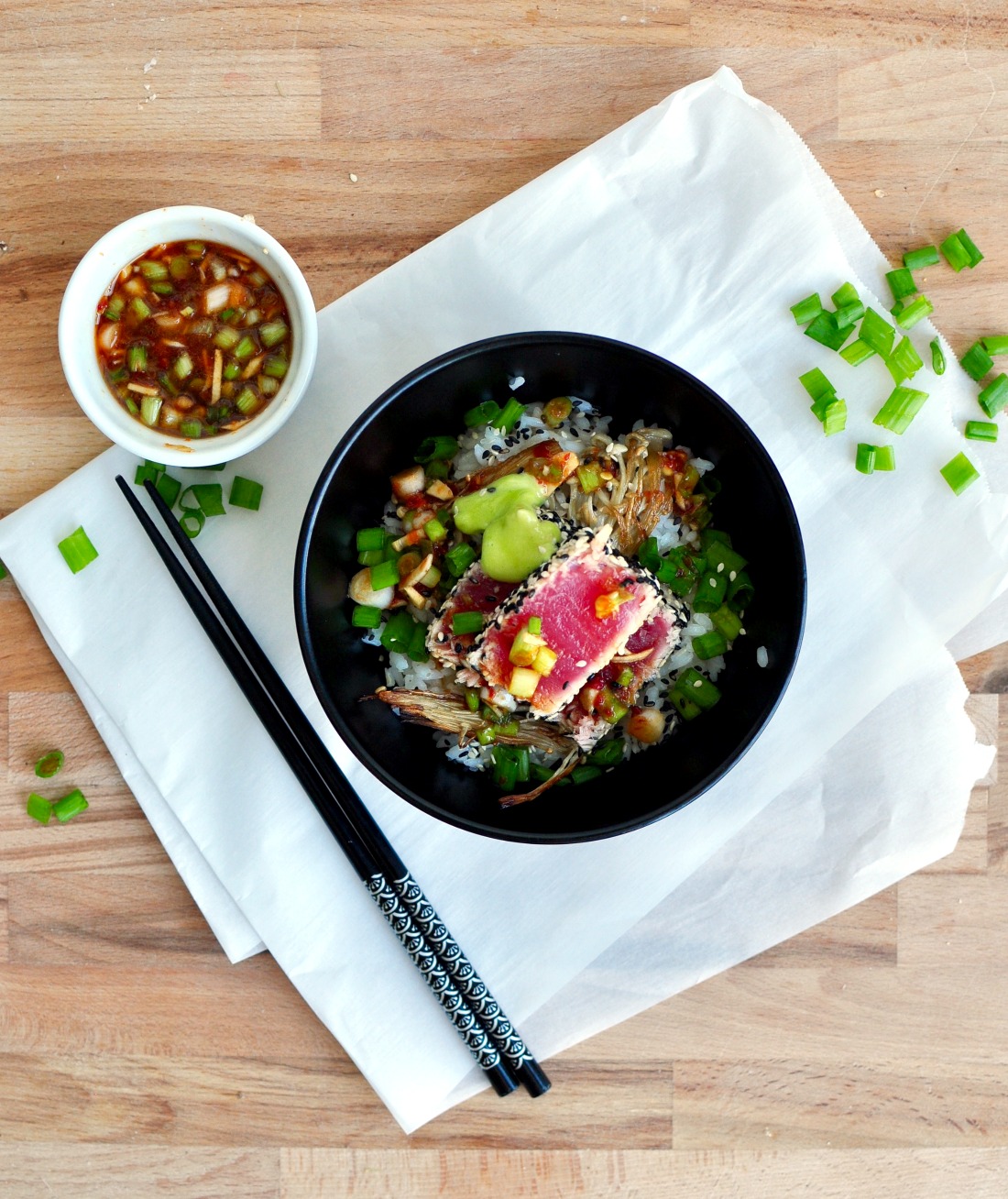 You want to make sure that the tuna is an even, dark color without a lot of fat on it. Cooking it for 30 seconds on each side, will give you a seared but very raw piece of tuna.

Cook rice according to instructions: I rinse my rice, combine rice and water in a small covered pot, bring to a boil, turn the heat down to a simmer and simmer for 10 minutes. Remove from heat and let sit, covered for an additional ten minutes. Fluff rice with fork.

While the rice is cooking, heat up a splash of oil in a small pan. Cook enoki mushrooms until browned. Season with salt and pepper.

At the same time, on a plate lay out sesame seeds in an even layer.

Cut tuna steak into even rectangles. You want it to be an even log so that each of the four sides are cooked for the same about of time (see pictures, about 1 1/2 inches thick)

In a pan, over high heat, heat up a splash of neutral oil.

Once the oil is hot, cook tuna for 30 seconds on each side (2 minutes total)

Remove from pan and set aside.

In a small bowl combine all of the ingredients for the sesame sauce.

In a small bowl combine the ingredients for the wasabi cream.

Assemble bowl by placing rice at the bottom, topping with enoki mushrooms, tuna, any extra green onions, sesame dressing and a dollop of wasabi cream.