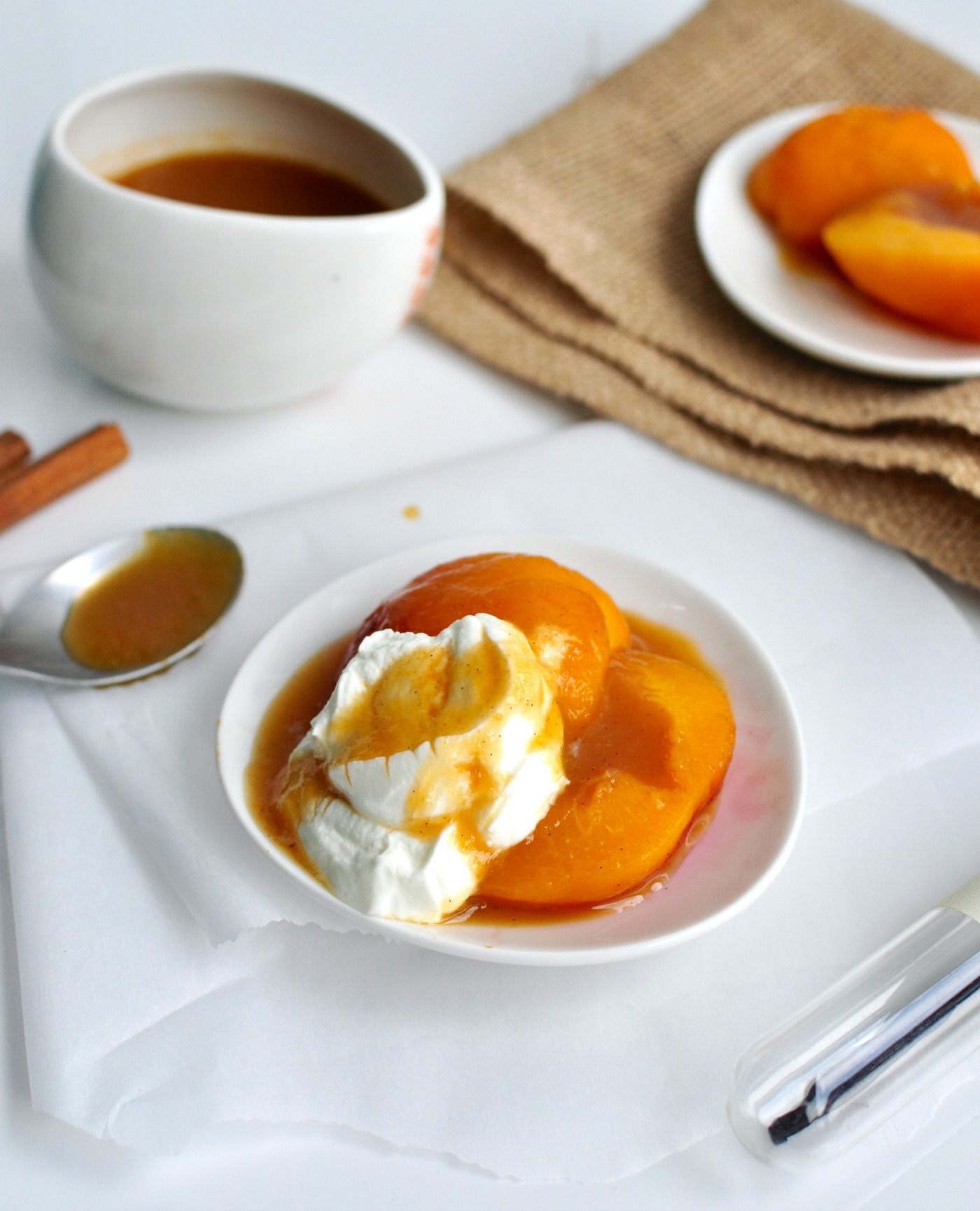 Part of me can’t bear to do anything other than shove my face with fresh, raw fruit now that everything is in the markets. I love berries a lot but if you made me choose, I think stone fruit would be my favorite. Especially peaches and nectarines. There is probably nothing better than a juicy, sun-warmed peach that pulls perfectly away from the pit. I am so grateful they are back. However, I couldn’t get the idea of poaching peaches in their own juice out of my head. I was watching Masterchef Australia (hooray! I still can’t get enough of that show…) the other day and one of the contestants cooked carrots in their own juice. I thought this was a pretty brilliant idea but because I am not such a fan of cooked carrots (although I am tempted to try them like this! I will report back) I decided that peaches would be a great way to try this intriguing technique. And so, I decided that poached peaches and cream was a very acceptable way to use my beautiful raw peaches. 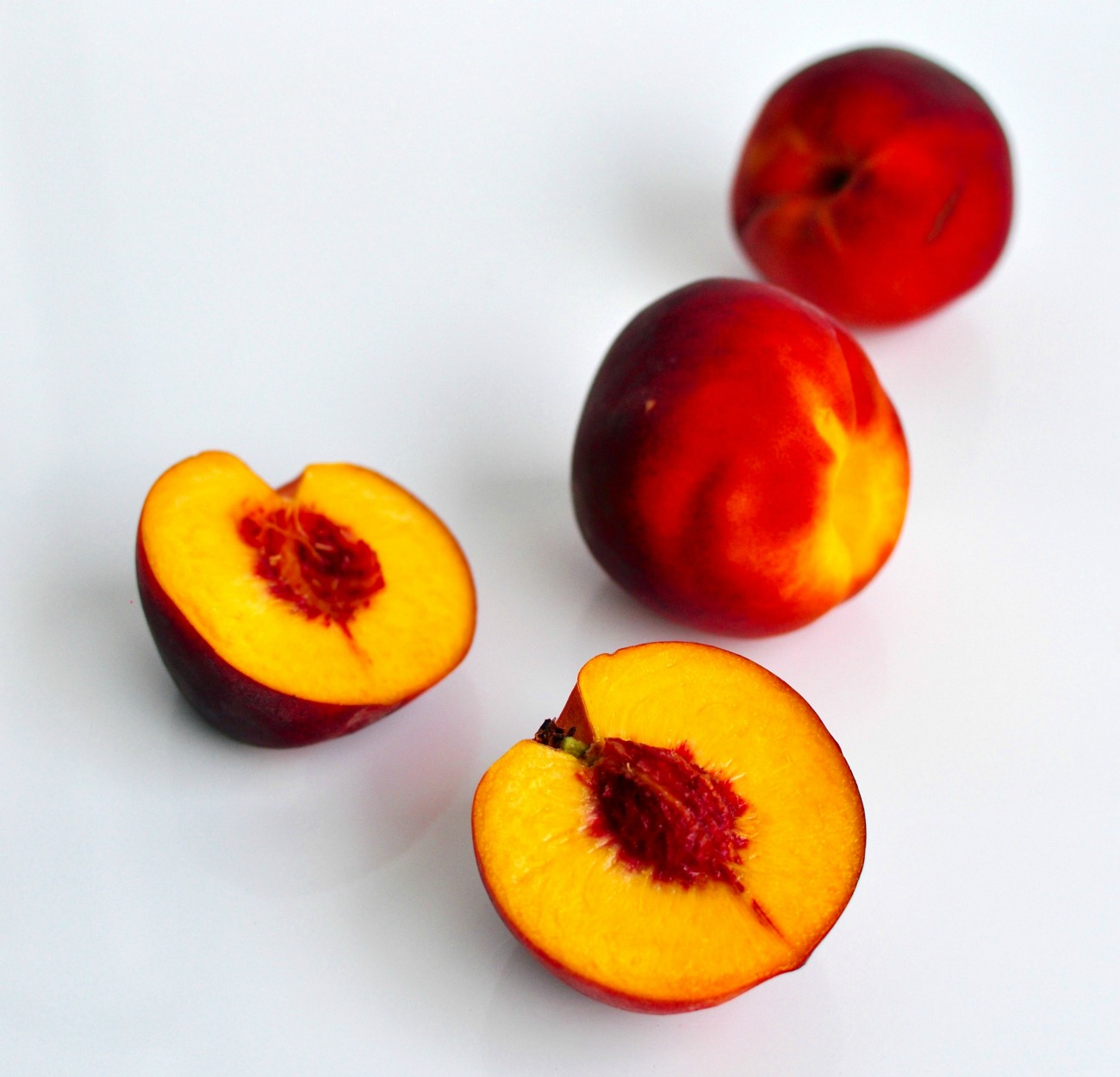 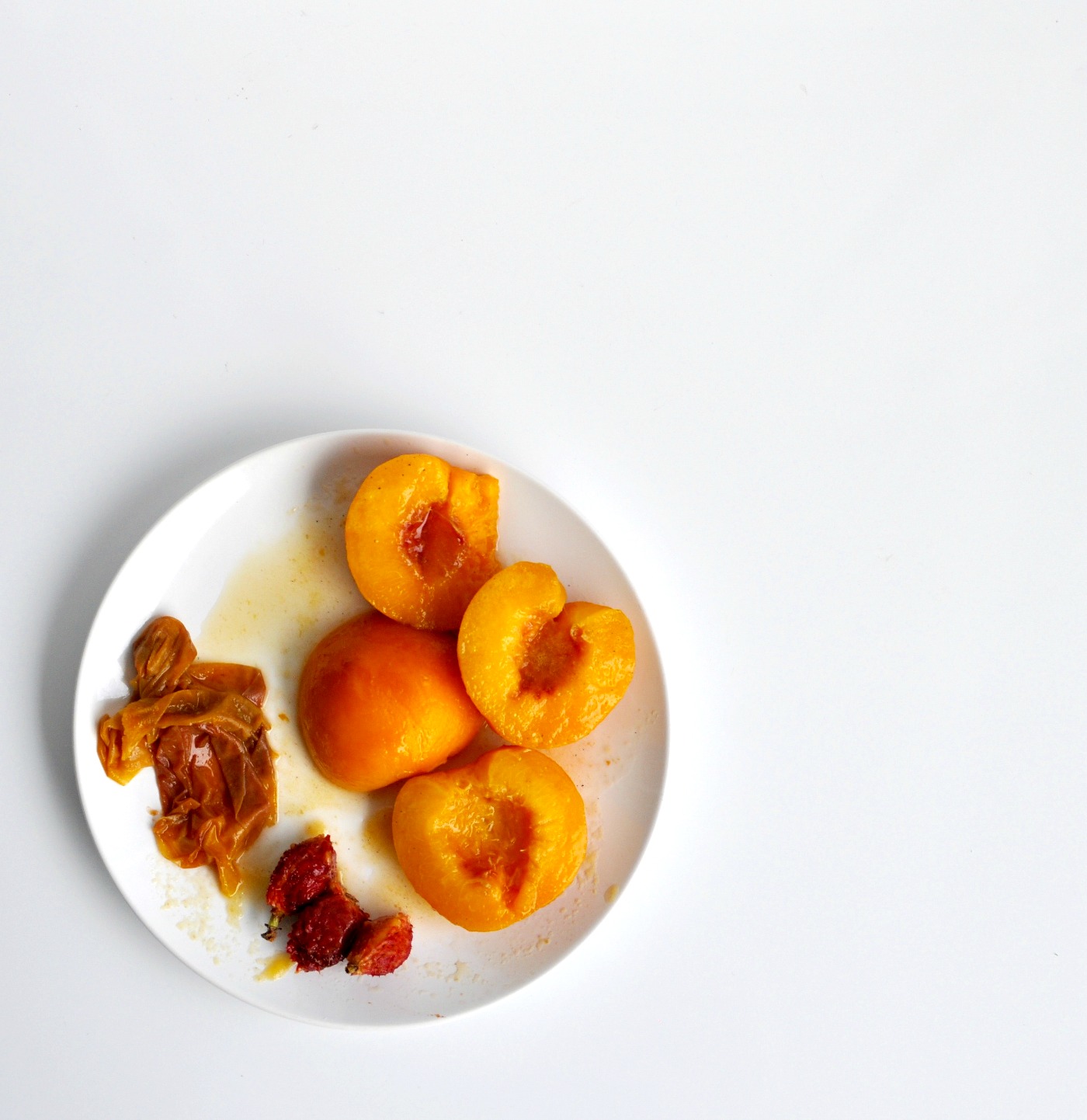 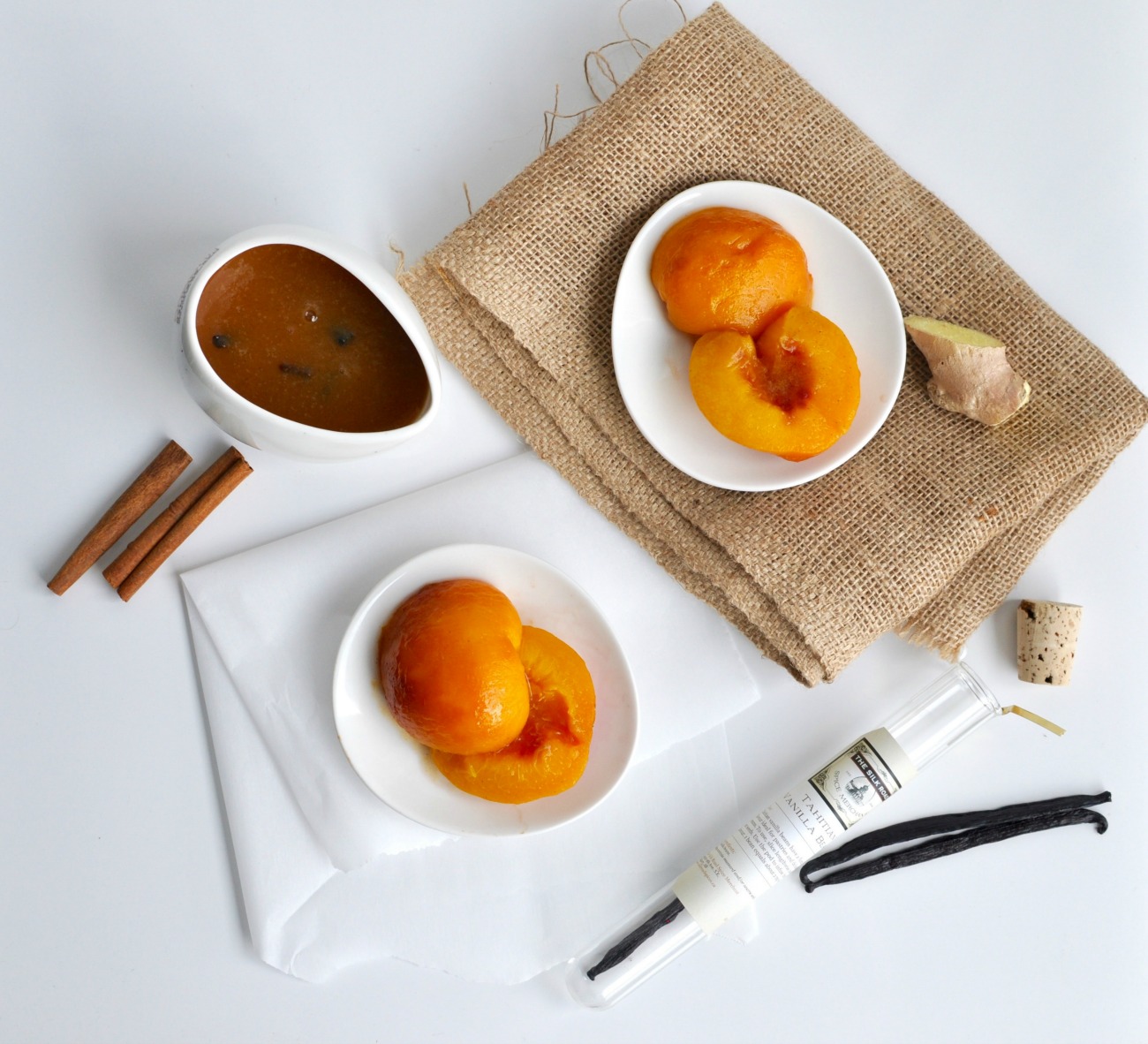 After poaching, the peaches are soft, naturally sweet and tender but they still hold their perfect half-sphere shape. They are cooked in a mixture of their own juices and some spices (cloves and cinnamon) and aromats (ginger and vanilla bean) to amplify the flavour of the fruit. After poaching them, they are delicious cooled to room temperature and basted with the juices that they are cooked in, which is boiled until it’s thickened to a glossy delicious syrup. The syrup and peaches reminds me of a much better, adult version of those canned peaches that I used to love in fruit cups as a kid. Dollop on some refreshing and cool whipped cream or greek yogurt (whichever you’re feeling on the day) and it’s the perfect sweet treat for the summertime. 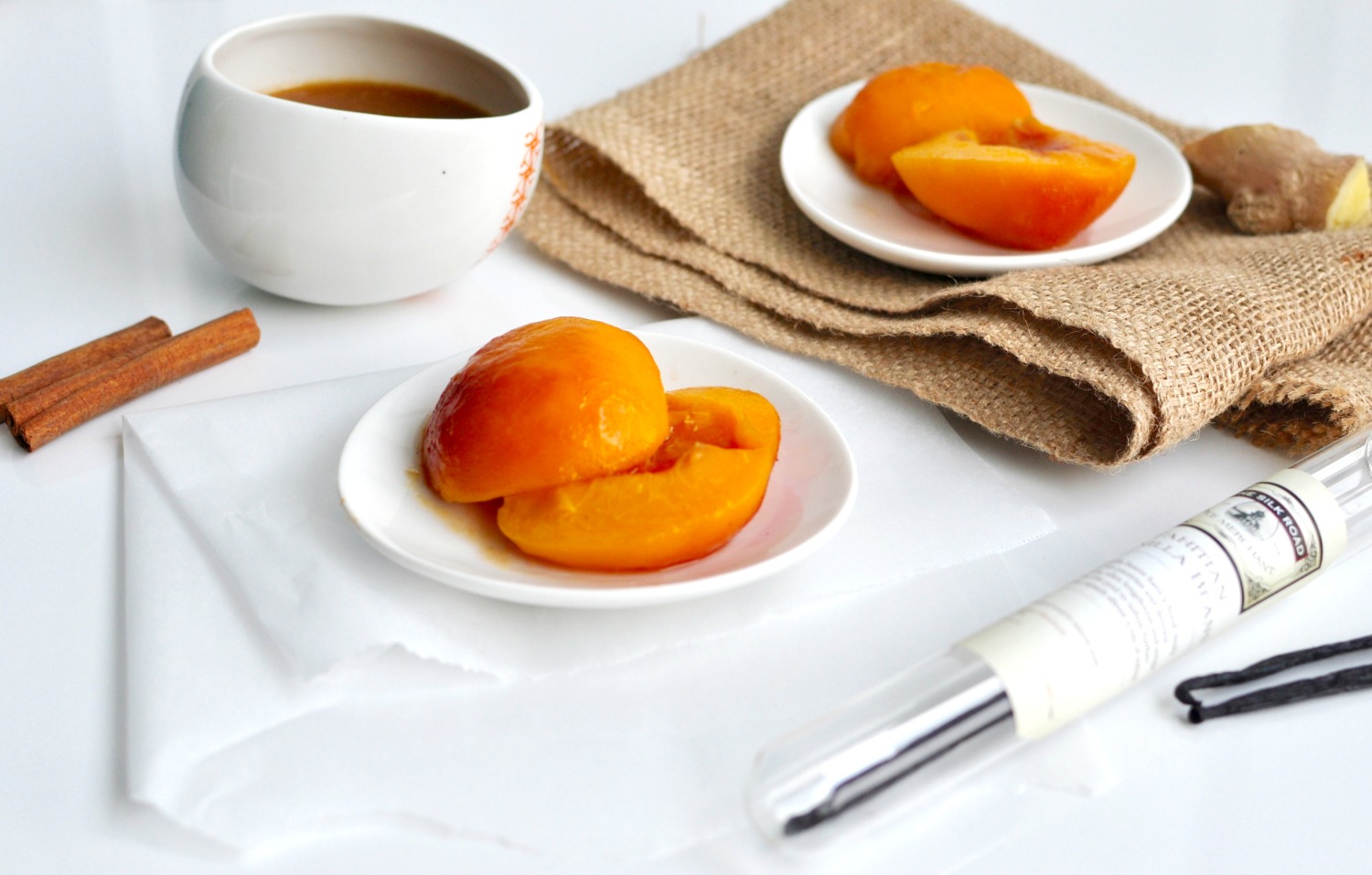 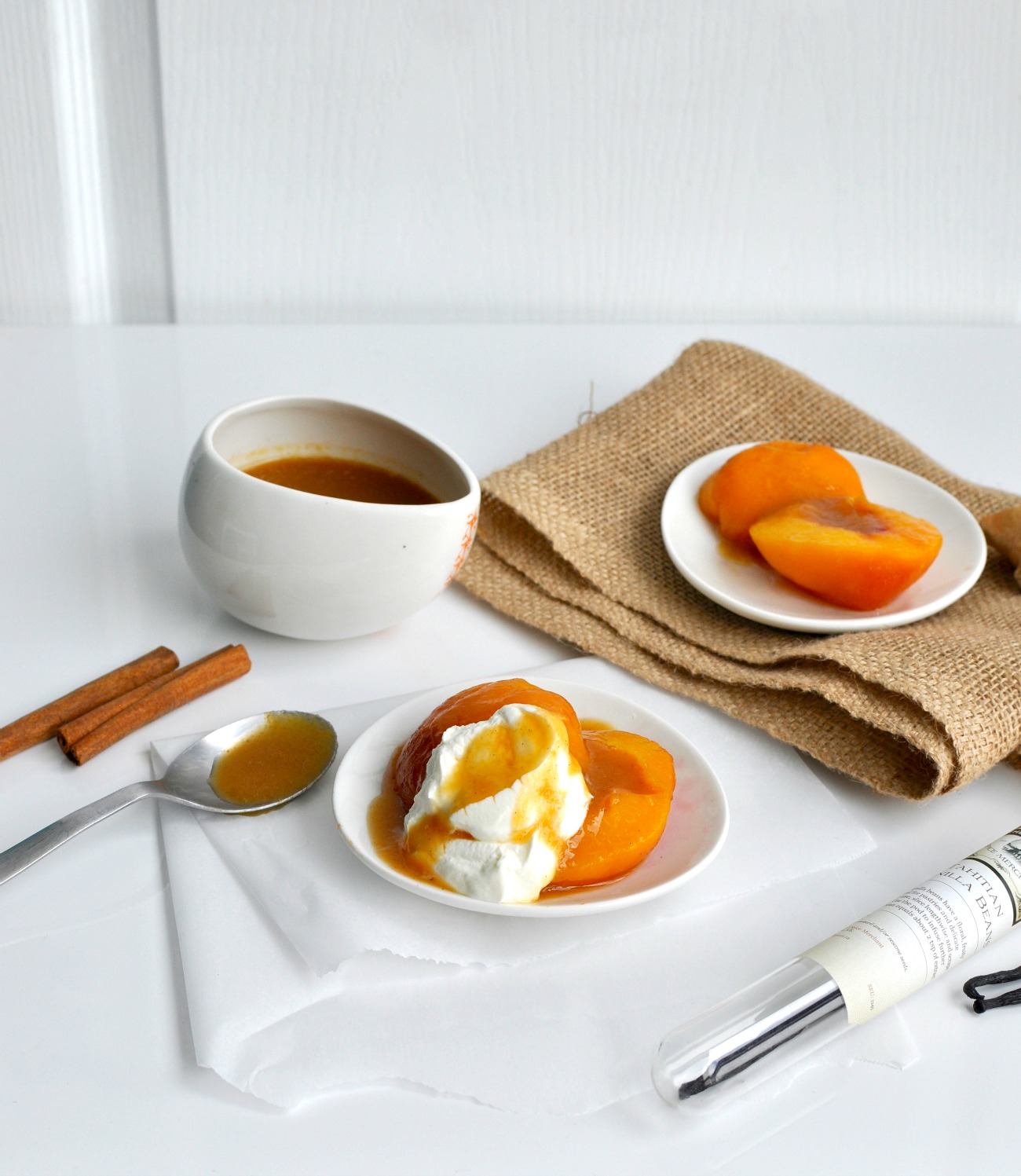 Your peaches should still be firm, but ripe, before you cook them. You don't want them to be falling apart after they are poached.

To make this vegan, substitute agave for the honey and use coconut whipped cream or a non-dairy yogurt as the topping.

Cut all of your peaches in half and remove pits.

Take two of the peach halves (one whole peach) and blend it with 2 cups of water.

Place peach water, remaining halved peaches, cinnamon stick, cloves, ginger, and vanilla in a small, pot and bring to a simmer. You want the liquid to reach the top of the peaches (it's ok if they're floating). If there's not enough liquid, add a bit more water.

Simmer, uncovered for 10-12 minutes, until peaches are soft and tender but not falling apart.

Remove peaches from liquid and set aside to cool. Remove skin, it should come off very easily.

Add honey to the peach water, bring to a boil and boil uncovered for 10 minutes until it thickens into a syrup. Strain the syrup.

3.1
http://mysecondbreakfast.com/poached-peaches-and-cream-recipe/
Poached Peaches and Cream was last modified: July 6, 2015 by My Second Breakfast