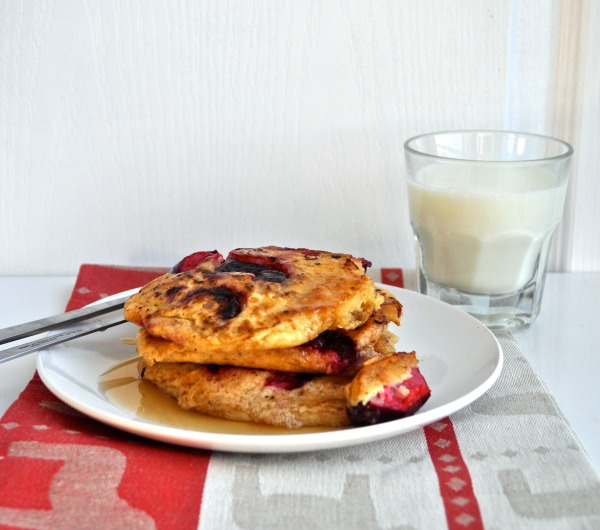 Last week, my boyfriend bought 5 plumcots (a mixture between a plum and apricot) and didn’t eat any. Then he went out of town for a couple of days, leaving me with slightly overripe fruit and no one to cook for. I don’t know why cooking dinner suddenly becomes so much less appealing when someone else isn’t there. I certainly don’t cook solely to please him- I love cooking, I love eating good food! So why is it so hard to make something when you’re alone? Actually, my instinct was to eat cereal for dinner or to undertake a huge culinary project like making ravioli from scratch or various fancy breads, but I figure it was nicer to share those things. 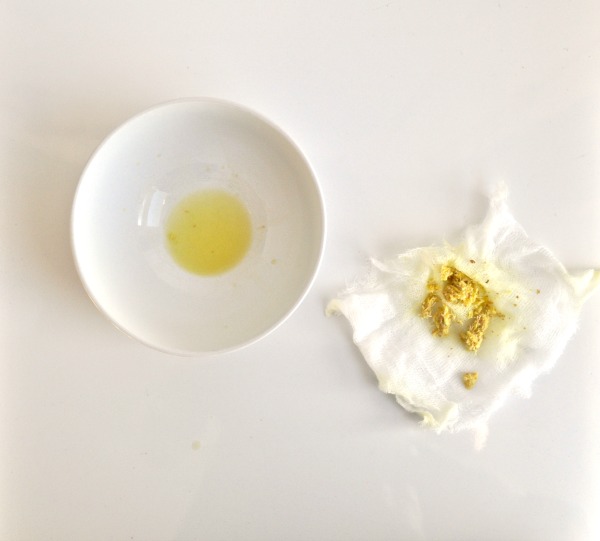 In the end, I made a compromise. I would have breakfast for dinner (which I always love when I’m alone) but I would also use up some of those poor plumcots that definitely wouldn’t be enjoyable eaten raw anymore. I love using plums in sweet/baked goods. I made these scones with plums most recently, and they were even better than the strawberry version. For these, I used a base pancake recipe from A Cozy Kitchen, because my banana pancakes, while delicious, were designed to mimic the pancakes I had in Vietnam which are slightly more dense and heavy. I wanted these to be light and fluffy, and crispy on the outside, and bursting with juicy fruit. You know what I’m talking about right? 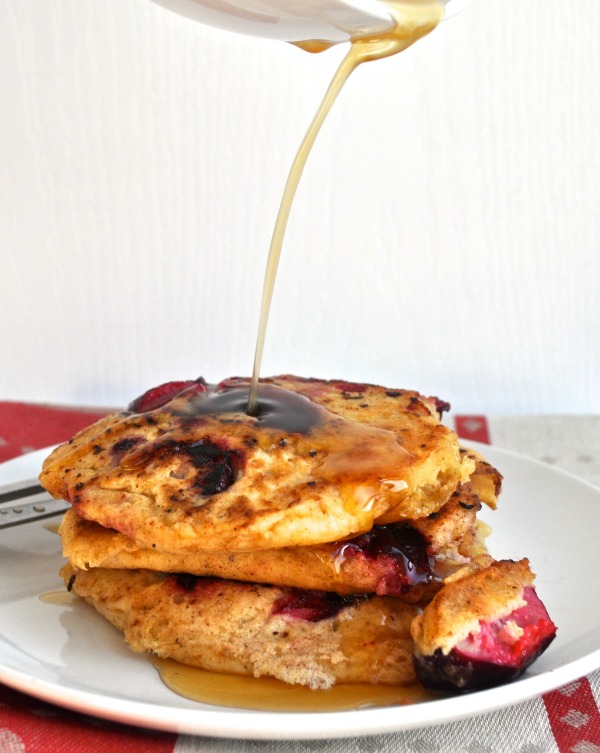 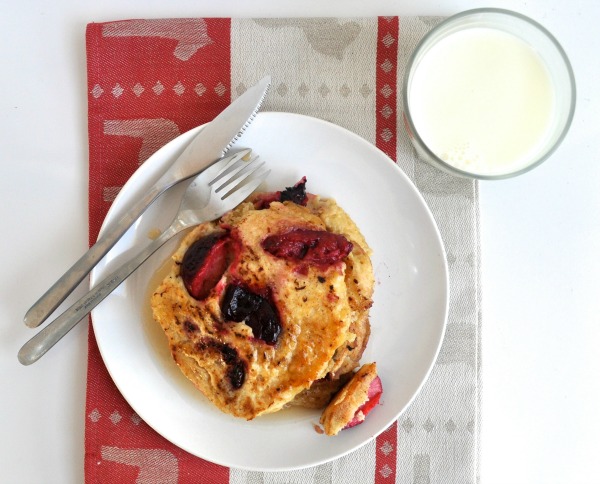 Dinner was so completely satisfying, that this morning when I woke up I simply ‘had to’ use up the other two plumcots ‘before they went bad’. This time around I decided I wanted to spice things up a bit. I thought that cardamom would go beautifully with the fruit (it really did) and I also add a little extra flavour to the batter that I felt was lacking the first time around. Of course, if cardamom doesn’t appeal to you (it definitely has a distinct taste) you can replace it with good old cinnamon or something else that you imagine would be delicious. I also wanted to make ginger syrup. I was watching Masterchef Australia the other day (best show ever!) and one of the contestants made ginger juice and served it over macerated fruit. I had never thought of making ginger juice before, but when I looked it up, all you had to do was squeeze some blended up ginger in some cheese cloth and out came beautiful juice. And I happen to have some cheese cloth. Exciting times. It was amazing. If you don’t have cheese cloth (or muslin), I found mine at my local hardware store (I’ve been told it’s also sold in grocery stores but I’ve never been able to find it). If you can get your hands on some or have a juicer make this syrup. Seriously. 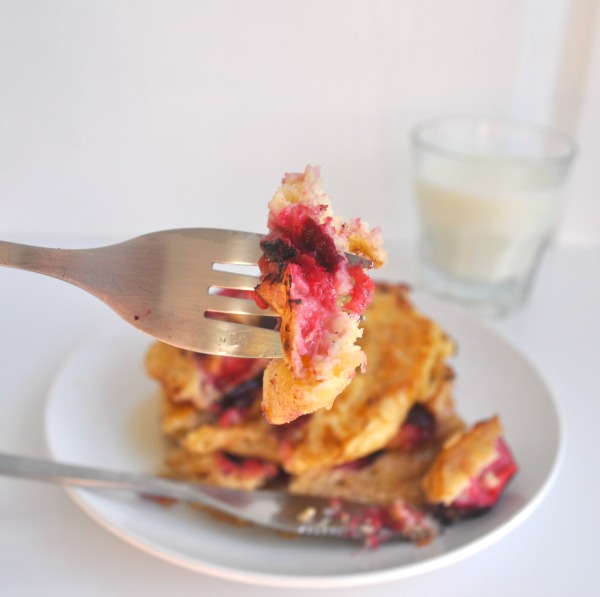 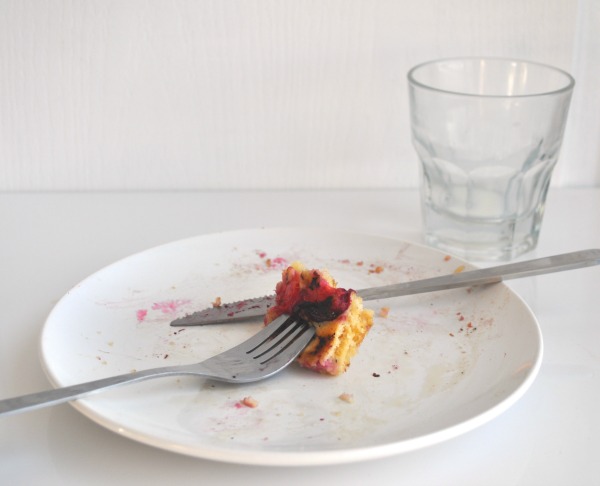 Base pancake recipe adapted from A Cozy Kitchen.

If you're eating solo, like I was, this recipe is easy to halve, except for the egg which is a pain. I like to crack the egg in a small bowl, whisk it up and pour about half of the mixture into the wet ingredients. If you want to be more precise, using a tablespoon put one in mixture, and discard one (continuing until there is no more egg left).

If you're not a fan of cardamom, you can replace with some cinnamon or another spice that you enjoy. I ate these plain and they were delicious too, but I preferred it with a bit of flavour from the cardamom. The ginger syrup is really out of this world, but again, if you don't want to mess around with a juicer or cheese cloth, the pancakes are still amazing texturally and flavor-wise.

Juice your ginger OR

Blend ginger as finely as possible.

Transfer blended ginger into a piece of cheese cloth or muslin and squeeze juice out into a bowl. You should have about 1 tablespoon of juice.

Heat up maple syrup in microwave for about 30 seconds (if you prefer warm syrup) and stir in ginger juice.

Heat up a large skillet over medium heat.

In a large bowl, whisk together dry ingredients.

In a small bowl, whisk together wet ingredients.

Mix wet into dry ingredients until incorporated, with a few lumps. Gently fold in plums.

Melt about 1 tablespoon of butter in the skillet.

Cook on one side until turns golden brown (2-3 minutes) and bubbles start to appear on the surface.

Cook other side for about 2 minutes, until golden brown (adding butter as needed).

Repeat until you're finished with batter.