The food in Japan really left a mark on us. I think that it was largely because before we went our idea of what Japanese food was pretty much sushi. So, the process of discovering all sorts of wonderful food was always an adventure.

One of the most special meals that we associate with Japan is the first time we ate Okonomiyaki. We were in Hiroshima and were told by our hostel that we had to go to this multi-level building that had multiple food stations that all served Okonomiyaki, a specialty of the city. Of course, we went, and randomly chose a stool at one of the stalls. Luckily, I was able to get the vegetarian version of the dish. We sat there, watching the chef make Okonomiyaki like a pro, I can’t imagine how many he has made in his lifetime. 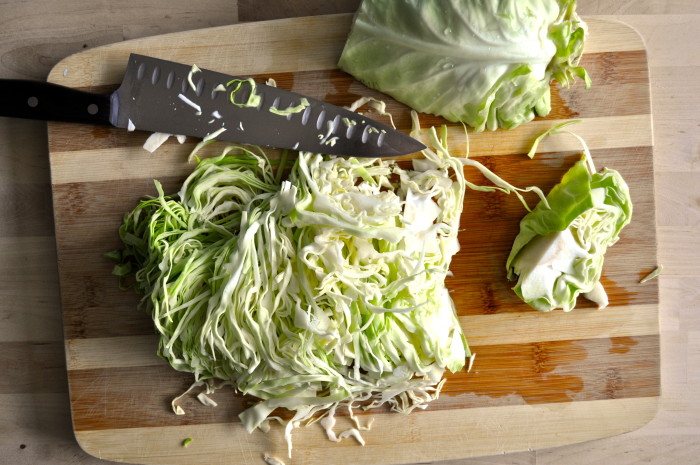 Unlike other types of okonomiyaki (which I later read about, but at the time didn’t know existed), Okonomiyaki in Hiroshima in unique because it layers a number of ingredients, rather than mixing all of them together in a pancake batter and cooking it as one big pancake. I remember them placing this huge mound of food in front and me thinking, how in the world I was supposed to eat it with chopsticks. Luckily, they also provided us with a little spatula that we could kind of use as a knife and we managed to get through the whole thing (not very elegantly of course). Despite the fact that it was so very tasty, it never occurred to me to try and make it at home. 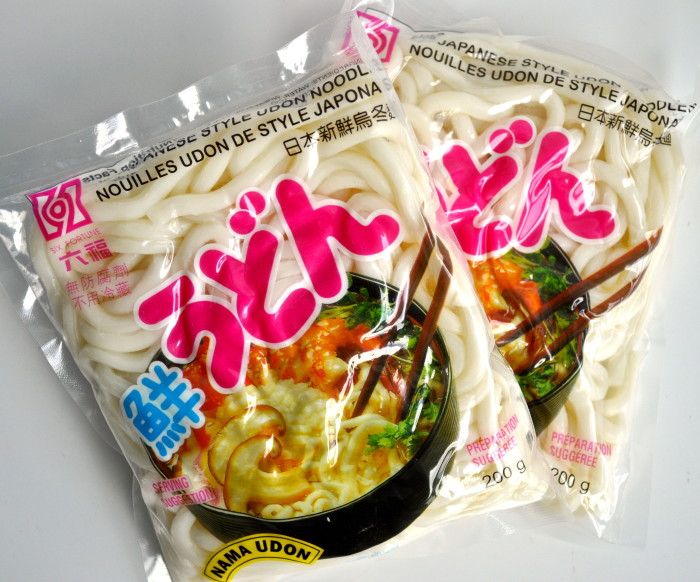 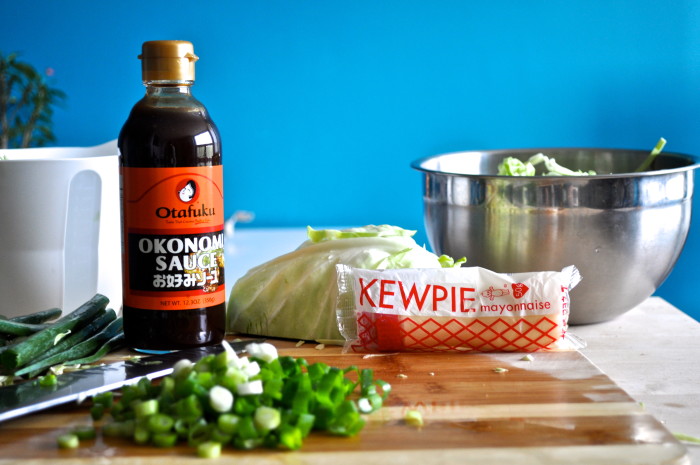 When you break the dish down, it’s quite simple. A layer of savory pancake, fried noodles, cabbage, bean sprouts, egg and slathered with okonomiyaki sauce, japanese mayonnaise and green onion (they also often include bacon). What prompted me to try this at home was a series of events. First, seeing and then purchasing a bottle of okonomiyaki sauce at our Asian grocery stores few months ago, planting the idea in my head. More recently, a friend of ours brought us back Japanese mayonnaise after returning from a trip to Japan. And even more recently, I got some cabbage in our CSA box. Basically, the food gods were telling me that this was the week to make okonomiyaki.

I thought that this dish would be a giant pain to make, given that you are flipping and moving around a giant layered concoction, but really, it wasn’t as messy as I thought. Yes, the cabbage fell out from the sides a bit but it didn’t fall apart at all. The noodles and the pancake hold it together pretty sturdily. I was also concerned that the cabbage would turn out raw but it cooks pretty quickly from the steam in the pan (especially since it is so thinly sliced). It tasted just like I remembered. 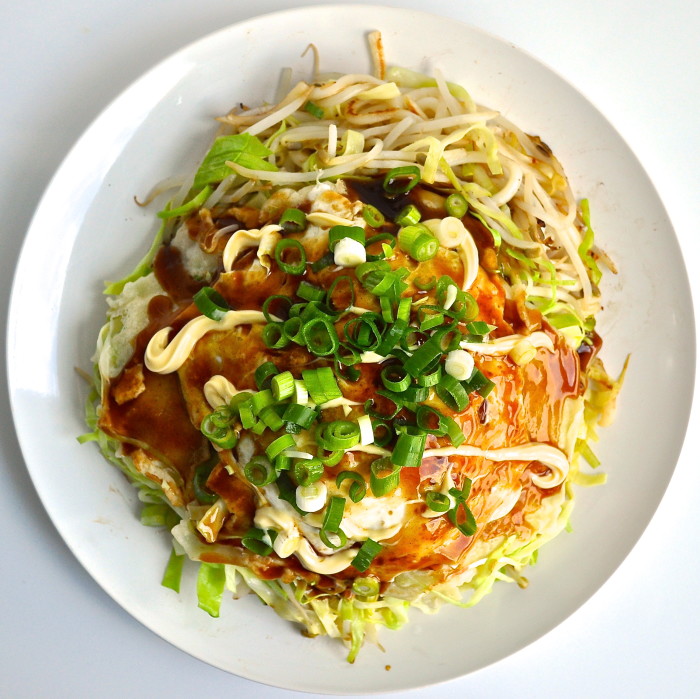 With this okonomiyaki, you will end up with a stack as follows (from bottom to top): fried udon noodles, cabbage, mung bean sprouts, pancake, egg, okonomi sauce, Japanese mayo and green onions. The noodles and pancake help keep the whole thing together! It is not nearly as messy or finicky as I imagined it to be.

Japanese mayo, from what I've read, is different from regular mayo in that it only uses egg yolks and a mixture of cider and malt vinegars, so is slightly sweeter. If you can't get your hands on it, leave it off the dish completely or you can try replacing with some regular mayo.

Okonomi sauce has been described as being a slightly sweeter and thicker version of worcestershire sauce. Many of the recipes I have seen combine tomato sauce with worcestershire and a sweetener. I wouldn't leave this component off since it is pretty important to the flavor of the dish.

Everything is much easier if you prepare all of your ingredients beforehand.

Have two pans heated and ready. It is best if you have one larger pan and one pan that is about 6 inches in diameter.

In a small bowl, whisk together flour, water and salt. This is your pancake mix.

In the larger pan, add a little bit of oil and start frying your udon noodles on medium-high. Make sure that the noodles are tangled and shaped as a six inch disc, they will form the base of the okonomiyaki. Don't disturb the noodles while you are frying them so that they are sort of 'glued' in the shape. Once they start to turn golden brown, turn down the heat while you prepare the rest of the dish.

In the smaller pan on medium-high heat, lightly oil (so the pancake doesn't stick) and ladle half of your batter to make a thin pancake. Cook for 1-2 minutes and add half the sliced cabbage and bean sprouts. This will look like a huge pile but it will shrink as it cooks.

Cook for an additional 2-3 minutes and when the pancake is full cooked, flip the pancake onto a large plate. To do this, take a plate that is as large as the top of the pan, place it on top, and flip the contents of the pan onto the plate.

In the now empty smaller pan, place your pre-fried noodles.

To steam the cabbage and bean sprouts, add about 4 tablespoons of water to the pan. The steam will help cook the cabbage more quickly. This takes about 3-4 minutes.

In the meantime, in the larger pan, crack an egg. Break the yolk gently and swirl the egg around so that it is a large circle (it is supposed to be about the same size as the okonomiyaki, but I got mine to about 4 inches in diameter). Once it is cooked, place on top of the pancake.

Transfer to a plate.