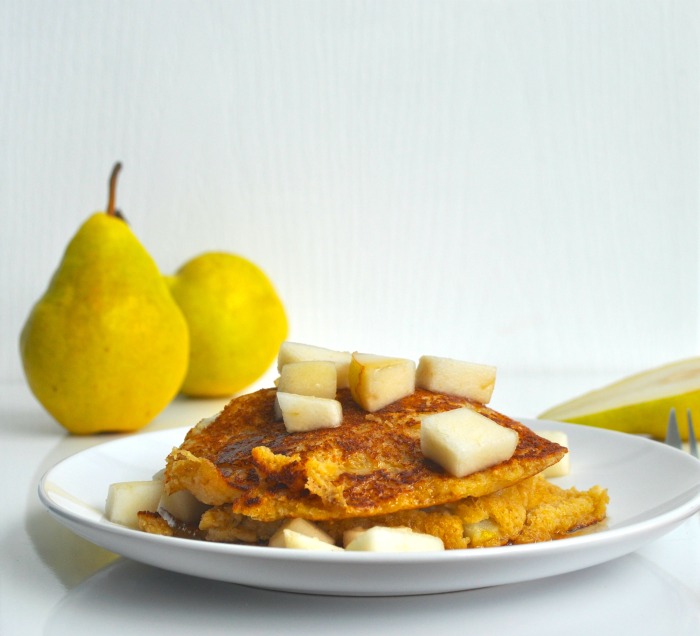 I’m having a big brunch get together at our place today. Of course, these Montreal bagels are going to be the stars of the show but I’ve got some friends who are avoiding gluten at the moment, so those aren’t the best for them. In trying to come up with something to make, I realized that I have very few gluten-free recipes in my repertoire. Actually, I find it very intimidating to say that anything is gluten-free up here because, in the end, I just don’t know what is gluten-free and what isn’t. I find it very confusing, especially when I am trying to make something that resembles something that is traditionally full of gluten. 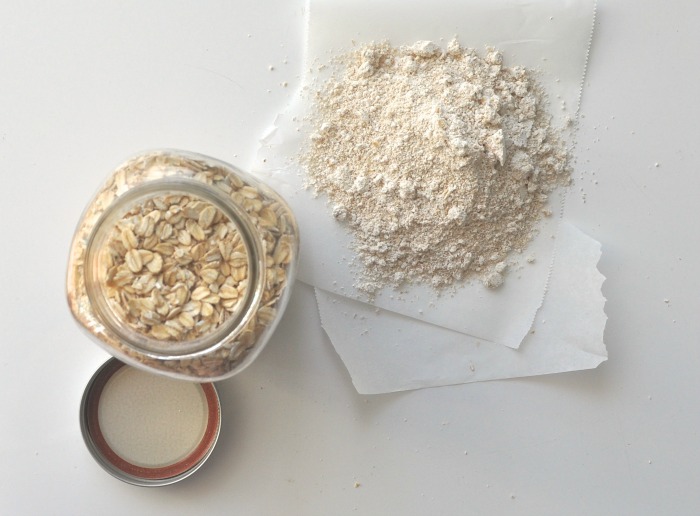 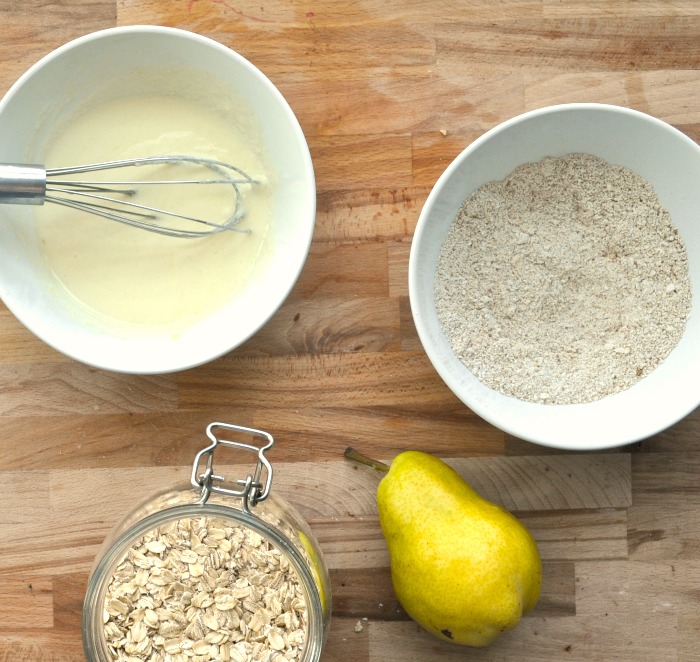 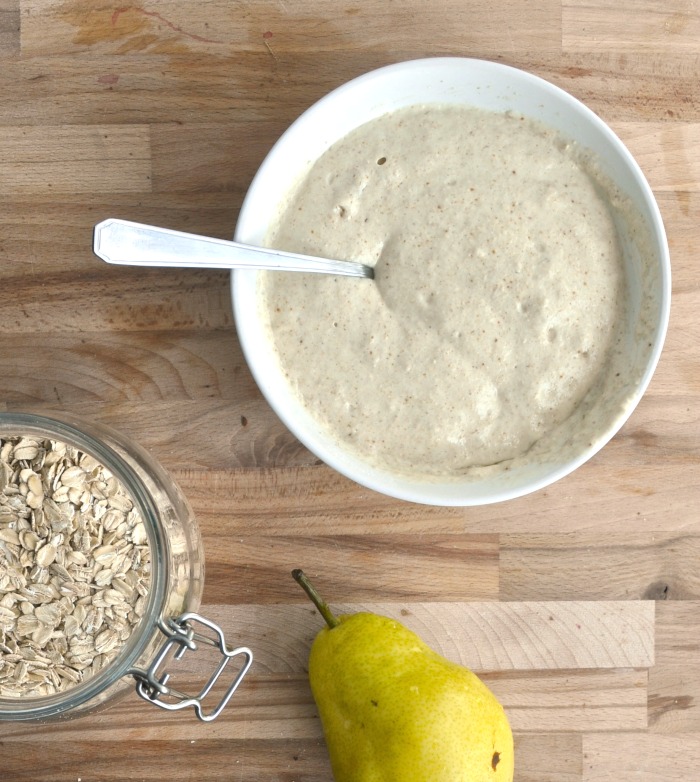 So, in my quest to find something suitable for my guest I decided to test out some oat pancakes. Oat flour is awesome because as long as your oats are gluten free, you can blend them up in the food processor until they become powdery and use them like flour. Of course, they absorb liquid completely different than traditional flour does, so you have to fiddle around with proportions. And fiddle around I did. In fact, I made these pancakes 4 times until I thought they were perfect. 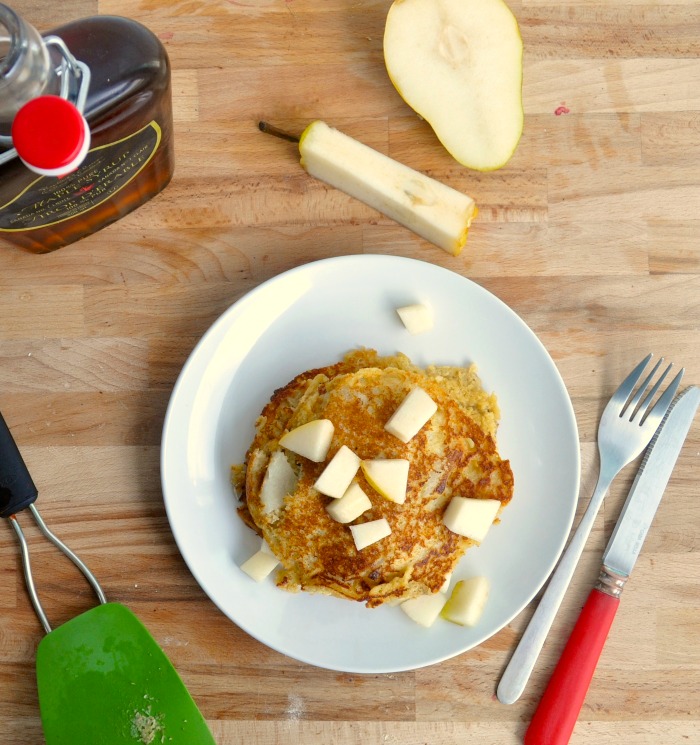 These are the final result of all of my pancake testing and eating. These pancakes are tender, vaguely spiced, crispy on the edges and filled and topped with some diced pear. I found that there are two things to keep in mind if you want a perfect pancake with this batter. First, let the batter sit for ten minutes before cooking off the pancakes. It lets the oat flour absorb some of the liquid. Otherwise, the pancakes will be a total pain to flip, will spread in the pan, and won’t crisp up as nicely. Second, I did find these pancakes a little more delicate than traditional ones. I found using a 1/4 cup measuring cup as a scoop to be the perfect amount for a flippable pancakes. 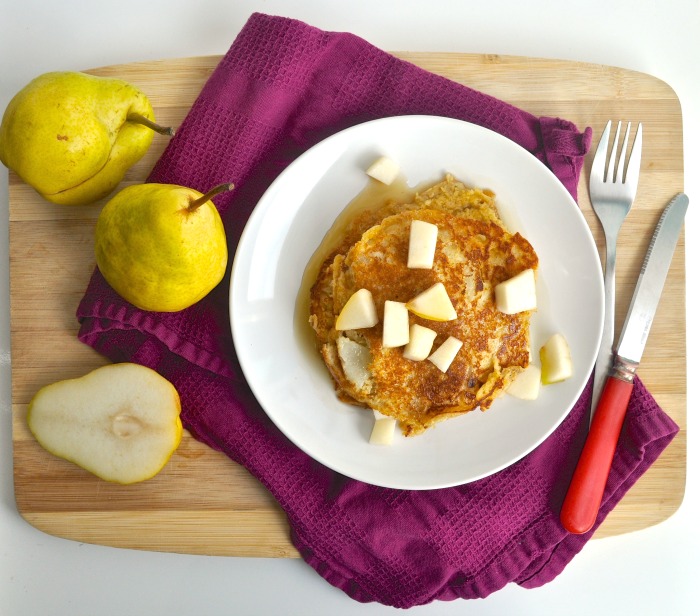 Let the mixture sit for 10 minutes, it makes all the difference. The mixture will firm up a bit so the pancakes won't spread as much in the pan, are easier to flip and will crisp up better.

I really encourage you to only use 1/4 cup measurement for these, no bigger. Again, it makes them easier to flip.

In a blender, blend oats until they turn into a fine powder.

Whisk together yogurt, melted butter, vanilla extract and eggs in a small bowl.

Let the mixture sit for 10 minutes.

Add most of your pear chunks, reserving some to keep fresh and sprinkle on top of pancakes.

In a large pan, heat up 1 tablespoon butter over medium heat.

Let pancakes cook until golden brown and quite set, about 3-4 minutes

Flip and cook for an additional 1-2 minutes.