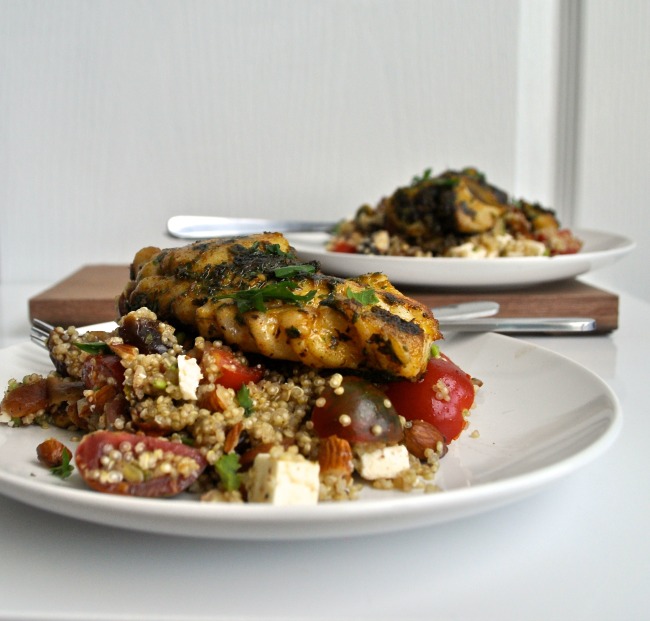 When I’m trying to get out of a cooking rut and make something different, the most helpful thing for me to do is try and think of a cuisine that I am not used to cooking. The other week, we bought some fish with the intention of making fish curry, which I never got in the mood for. Luckily, I thought that moroccan style fish, with a hearty quinoa salad sounded absolutely delicious instead. I hardly ever eat or cook moroccan food. I am not sure why because the flavours are definitely something that I am attracted to. To be honest, I didn’t really have a clear picture of what moroccan food was before I went there a couple of years ago. 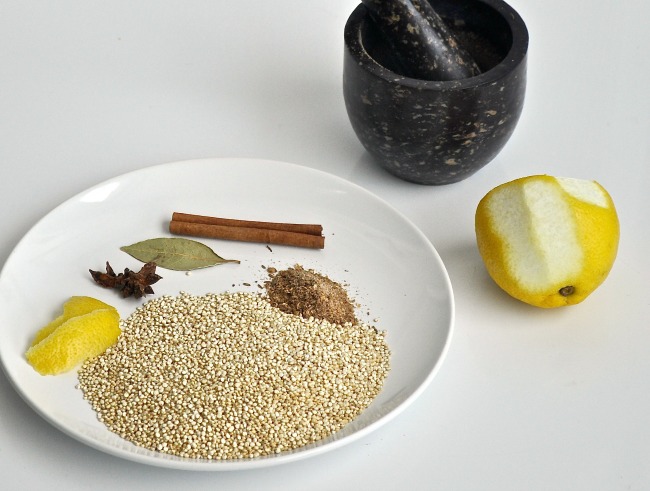 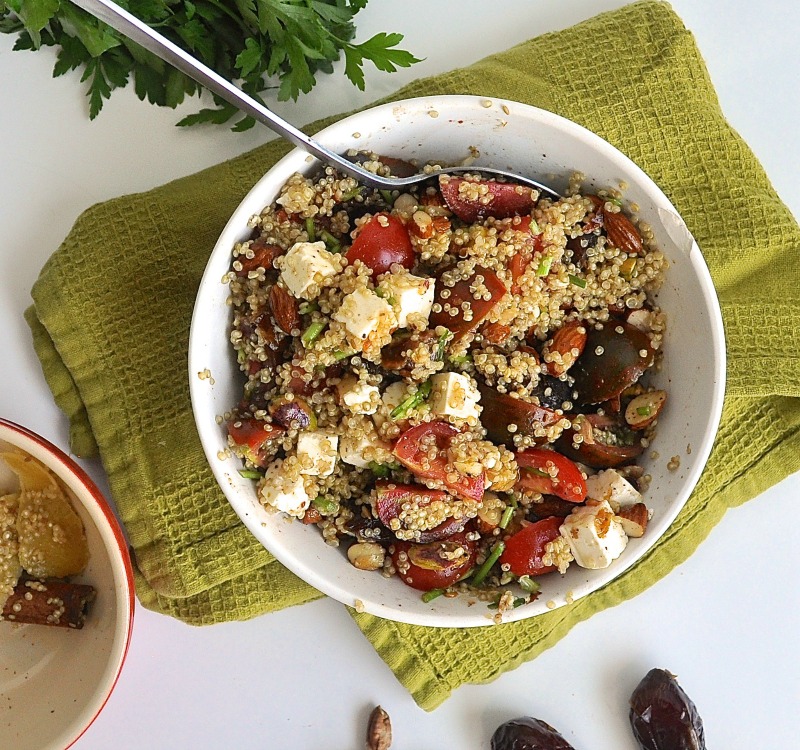 In the end, this dish exceeded my expectations. The fish is drenched in a slightly tweaked version of chermoula, a North African marinade typically used for seafood, that is basically fresh herbs, lemon juice, and spices. I think it’s more traditional to use cilantro, rather than parsley, but there are so many versions of the sauce floating around the internet, it is hard to tell. Most recipes however call for either preserved lemon or lemon juice, cumin, parsley or cilantro, paprika, and garlic. Whatever you want to call the recipe below, it is full of flavour and completely delicious. I used parsley because it’s what I had on hand both times I made this, but I’m sure you can replace with an equal amount of cilantro, depending on your preference. 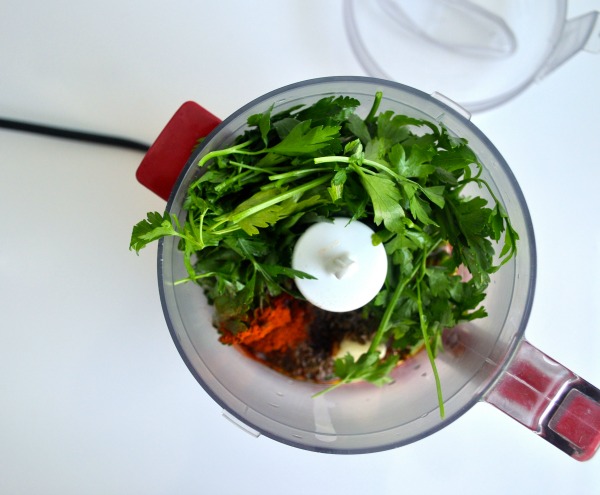 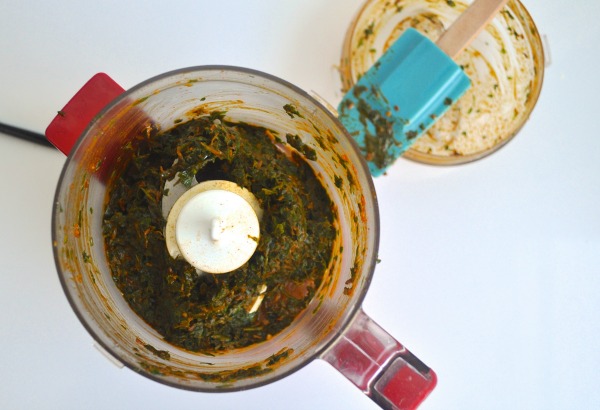 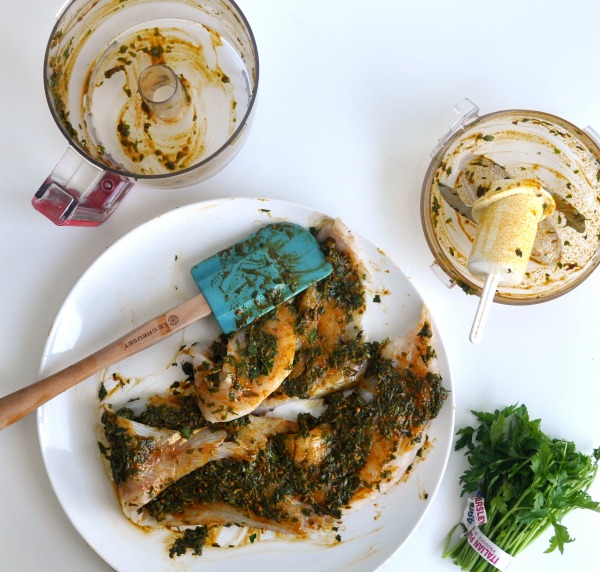 The salad on it’s own is also a show-stopper. Personally, if you’re leaving off the fish, I think this is an ideal potluck dish because it is great at room temperature, is slightly different, pretty substantial, and doesn’t wilt or get soggy like other salads might. It’s one of those salads with a huge list of ingredients (please don’t get scared off!) but the texture, flavour, and interest that each one adds to the dish just make it even better. The feta is salty and creamy, the tomatoes provide a bit of freshness, the nuts are slightly spicy and crunchy, and the dates a chewy sweetness. This isn’t a case of ‘less is more’. Personally I wouldn’t get rid of any of the elements of this salad. I also liked the idea of adding a bunch of spices to the water that the quinoa was cooking in to make sure that it was also infused with tons of flavour, and not just something to soak up the chermoula with. You could easily replace the quinoa with couscous or another grain that you’re loving, just adjust the cooking time. 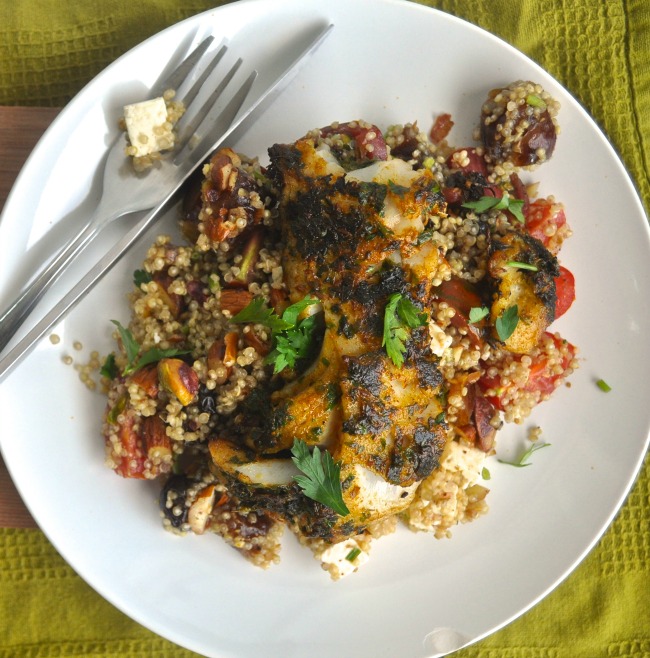 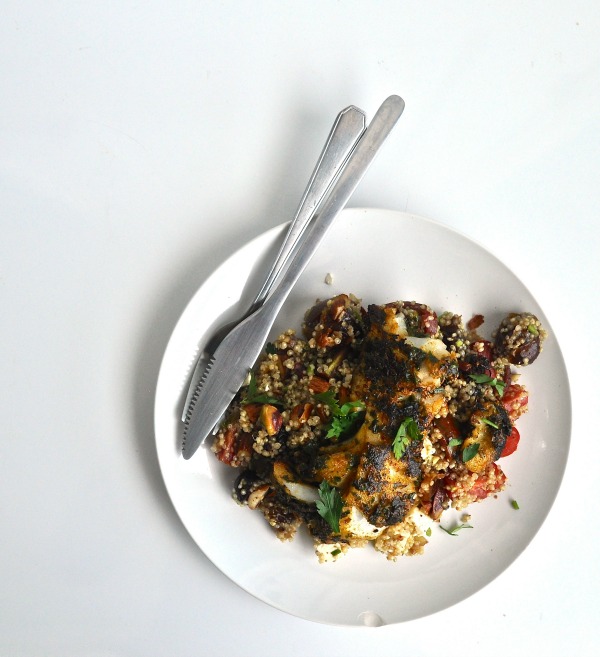 The list of ingredients is long, but most of these things are ingredients that you may very well have on hand. I think that both the fish and the quinoa salad are great either on their own or together. The salad, in particular, would be a great potluck dish!

In a small pot combine cumin, coriander seeds, cinnamon stick, star anise, bay lead, lemon peel, salt, quinoa and water. Bring to a boil, turn down to a simmer, cover pot and cook until quinoa is fully cooked (about 15 minutes).

In a small pan over medium-high heat, toast almonds, pistachios and sumac in a splash of olive oil, until golden brown.

In a food processor all of the ingredients (except the fish) until fully combined.

Cover fish with chermoula and cover with plastic wrap, letting it sit for 30 minutes (I cooked it once right away and it was also good, but better when marinade sat a bit).

Cook fish in some olive oil until fully cooked.