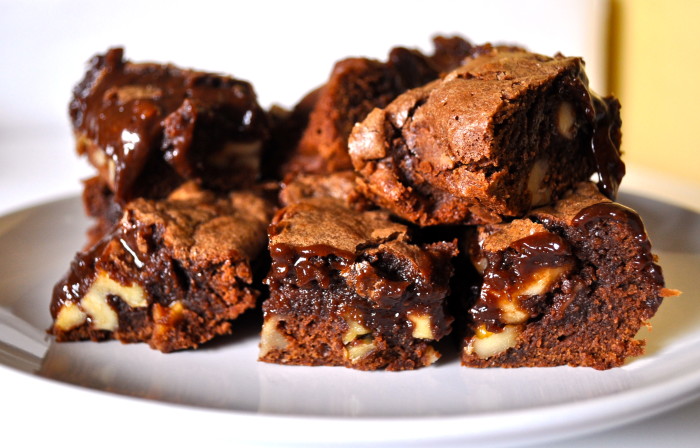 I know that it is already June and I should be wanting to cook all sorts of light spring dishes but the weather here in Calgary is anything but inspiring. It has been super rainy and cold the past couple of weeks so some comfort food was in order. You can’t really go wrong with chocolate (in my books at least) and I have been wanting to try out this new baking technique for a while, hence these half baked brownies. 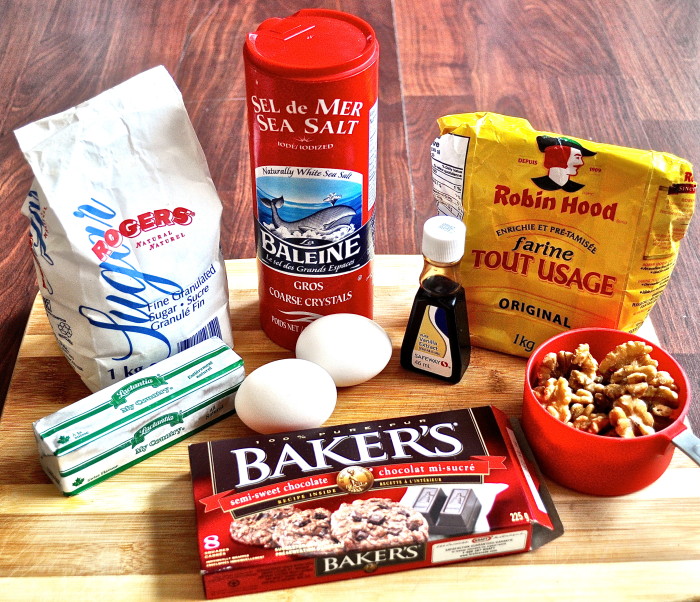 A couple of months ago, I was in a cookbook shop buying Ottolenghi’s cookbook, Jerusalem (awesome cookbook, by the way), and the owner started talking to me about a recipe in his first book. He said it was a cake, which was baked using a technique I had never heard of before. You started cooking half the batter before adding the second half so that the final product had two different textures.

I still haven’t come across Ottolenghi’s first book but I thought the technique would work perfectly with brownies. Whenever I read brownie recipes they always specify whether they are the cake-y or fudge-y kind. I always lean towards the ones that are described as fudge-y because I love brownie batter, who doesn’t? So I thought that doing a brownie where half of the batter was cooked completely and the other half only ‘half baked’ would be nothing short of delicious. However, I had a host of concerns about my little project: Will I be able to hit the sweet spot where the bottom isn’t overcooked and the top undercooked? Will the two layers just mix together and result in one big mess? 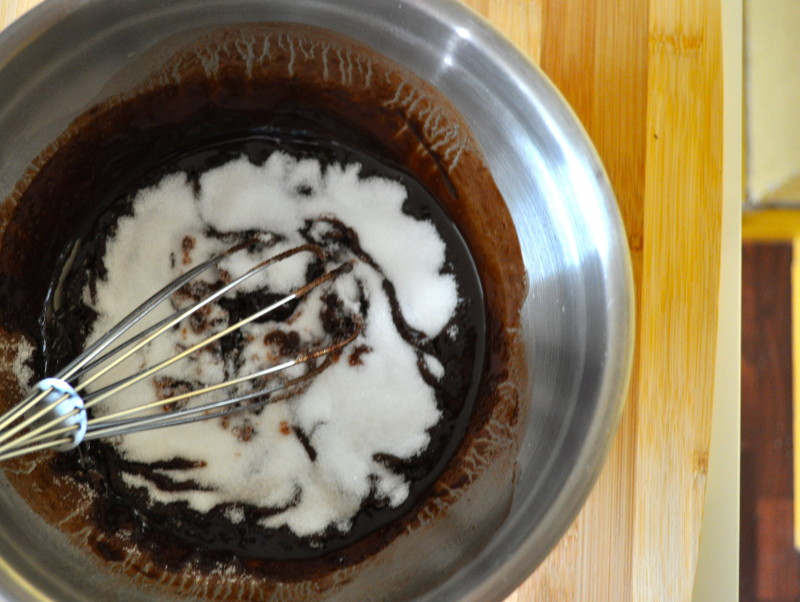 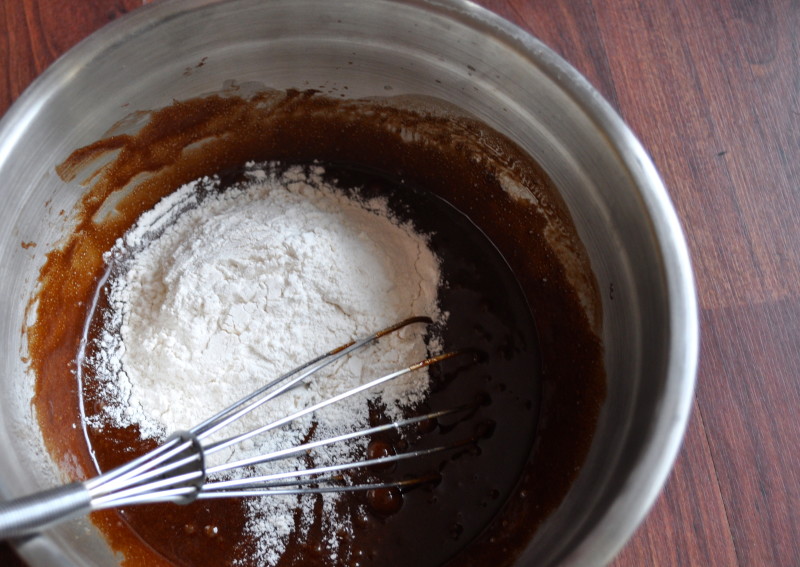 In the end, these brownies tuned out exactly as I had hoped. The bottom is perfectly cooked- no burnt brownies here! And the top layer just stays together and is still satisfyingly gooey. 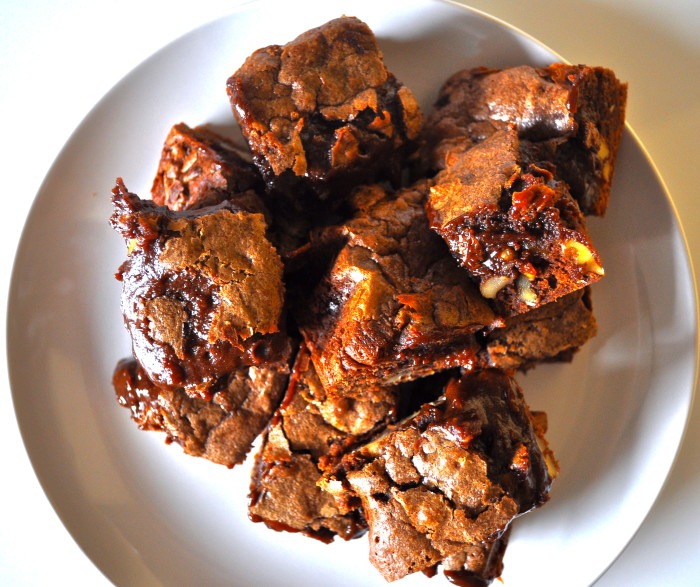 Adapted from Smitten Kitchen The brownie recipe itself was adapted from Smitten Kitchen's "Favourite Brownies". While she cooks her brownies in the traditional method (aka all the way through), it is a solid base recipe that I tweaked a little since I only had semi-sweet chocolate on hand. I also decided to add some walnuts to give the brownies an extra crunch, which contrasts nicely with the gooey top layer. If you're not a fan of nuts in brownies though, this would be fine without them.

These guys are pretty messy to make and you really have to embrace the mess when you are adding the second layer of brownie mixture to the first. Since the bottom layer isn't fully cooked when you're adding the top layer, it's best to dollop the mixture evenly over the bottom layer and smooth it out as best you can. The most important thing is that the second layer is even so that it all cooks at the same rate.

You won't be able to check the done-ness of the brownie by the toothpick method as the top is intentionally undercooked. Just make sure that the top has developed a crust on it and when you jiggle the pan the filling doesn't move. However, if you touch the top with your fingers it should be quite soft. Also, make sure to cool the brownies fully before taking it out of the loaf pan, if you take it out too quickly, it will be one big mess!

Preheat your over to 350 degrees Fahrenheit.

Put a small saucepan of water on the stove and bring to a simmer.

Put your butter and chocolate in a medium, heat-proof bowl. If your butter is frozen, melt it a bit in the microwave, otherwise, your chocolate will melt a lot faster than the butter.

Take the bowl off the heat and whisk in granulated sugar.

Whist in one egg at a time.

Add vanilla, coarse salt and flour, whisking between each.

Stir in ½ cup of chopped walnuts.

In a 9x5 loaf pan add half of the batter (about 1 cup). Put loaf pan in the oven for about 15 minutes, until the mixture has set.

Return loaf pan to oven for another 15 minutes until the top has formed a crust but is still soft to the touch.

Remove from oven and let cool completely in the loaf pan. Remove from pan. If it's not completely cool yet, place it on a cooling rack and leave it there until it is. I portioned the brownies into 12 servings to get pieces that were about 1.5 x 2 inches big. They're quite rich, so I wouldn't cut them larger than that!

3.1
http://mysecondbreakfast.com/half-baked-brownies-recipe/
Half Baked Brownies Recipe was last modified: January 4, 2013 by My Second Breakfast

10 thoughts on “Half Baked Brownies Recipe”