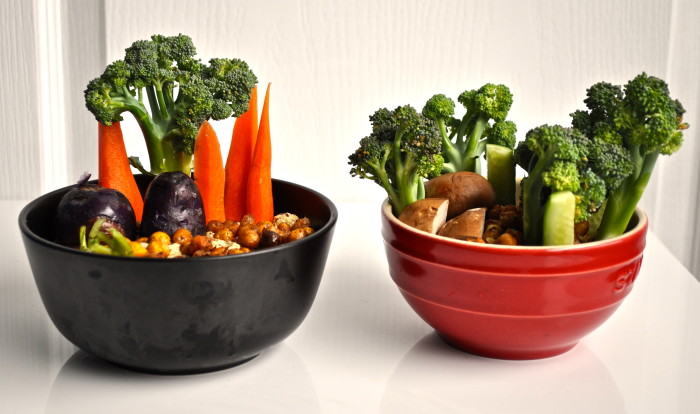 I bought a small terrarium last weekend. Basically it’s a small glass bowl that has a little garden inside of it. The first thing I said when I saw it was: how hard is it to kill this? (because if it is easy to kill, I inevitably will). The answer was that it was pretty hard to kill, so the second thing I said was: I’ll take it. Since I am working from home, I thought that it would be nice company for me. Is that crazy? Am I finally losing it? In the end, it makes me smile when I look at it, so it is now my most loved work companion.

What does this have to do with vegetables and dip? Well, when I saw this vegetable garden, the thought of making it also made me smile. In fact, I became so consumed with making it I couldn’t sleep. I couldn’t stop thinking of the different dips and vegetables I could ‘plant’.

I saw this dish being made on Masterchef Australia (as I said previously, I love that show so very much!). It was Heston Blumenthal week. Two words that I would use to describe Heston’s food are modern (since he uses tons of techniques associated with molecular gastronomy) and whimsical. I watched him talk about how food engages all of your senses, and playing with touch, smell and sight are all important in the experience. 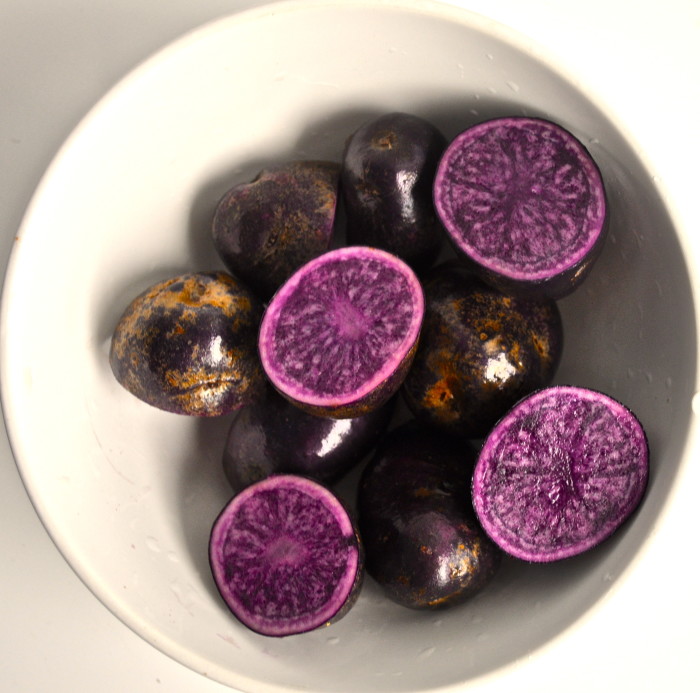 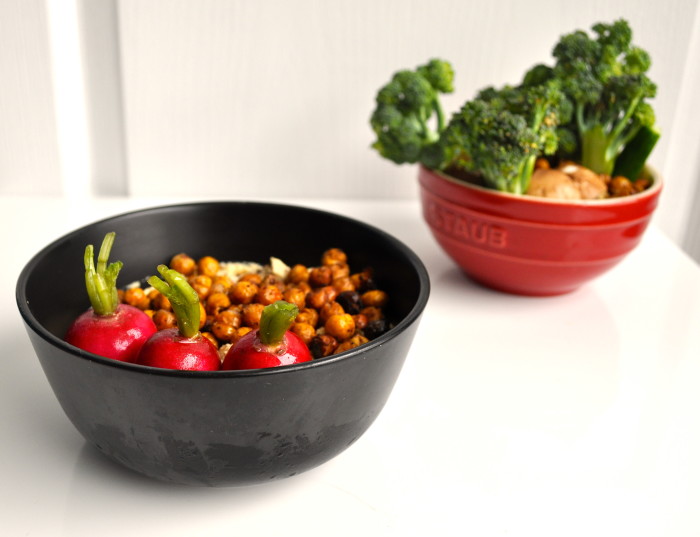 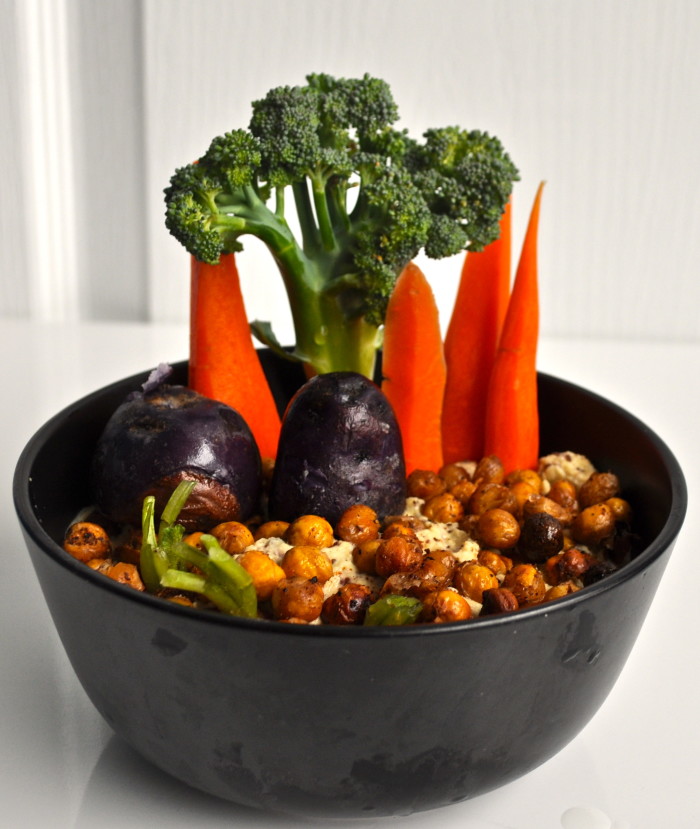 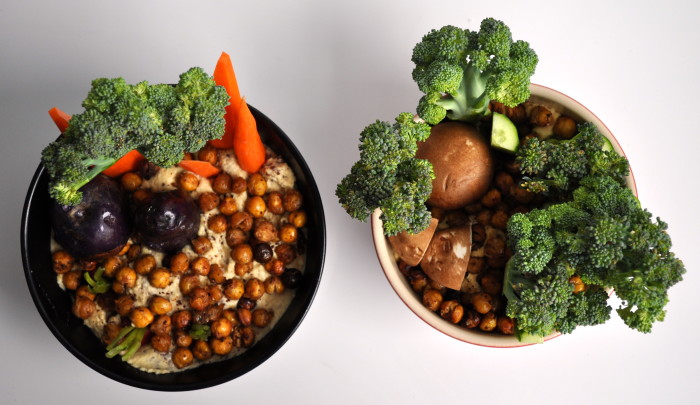 What caught me off guard with this dish was just how easy it was to adapt to a home cook’s kitchen. Most of the time when I read about dishes by modern chefs like him, it’s fascinating, but I could never imagine making it at home. This one has endless possibilities. All it is is a vegetable dip covered with ‘dirt’ (or ‘grass’ or ‘stones’) to resemble a garden that you ‘plant’ your vegetables in. I think that this is a super fun dish to serve at a party, for kids and adults alike. It’s a conversation starter, it gets people engaged with their food, it is beautiful and it is dead simple to make. You can change the hummus to whatever dip that you like the most (as long as it is thick enough to hold up the vegetables) and you can even do a dessert version- imagine, ‘planted’ strawberries with cookie crumb dirt and whipped cream. The possibilities are endless! 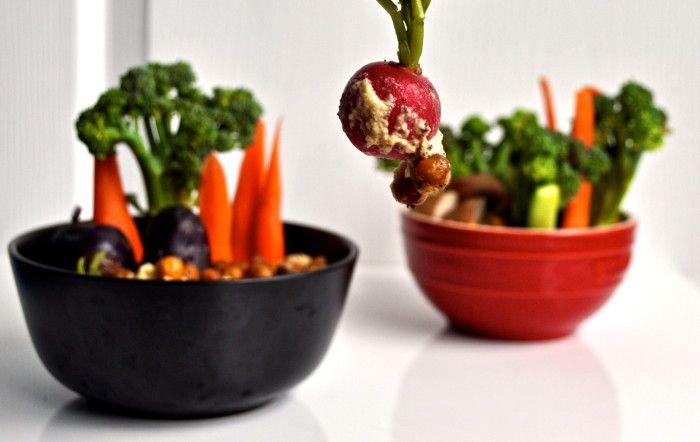 This is great for parties. I love the idea of making a lot of smaller bowls but you can also fill a loaf pan with hummus (you will probably have to double the recipe) and proceed from there.

Both the hummus and the roasted chickpeas are delicious on their own but I think that the gardens are adorable.

'Plant' whatever vegetables that you want. I think that roasted potatoes and mushroom caps look great as 'rocks' and that radishes and baby carrots (with green tops intact) are wonderful if you actually want to submerge the vegetables into the hummus, which allows you to be able to actually pull the vegetables out, which I think it the most fun!

You can also swap the hummus for your favorite dip as long as it is thick enough to keep the vegetables upright.

You can even do a desert version with planted strawberries, cookie crumb 'dirt' and whipped cream!

Preheat your oven to 400F

Dump on an oven tray lined with aluminum foil.

Bake for about 30 minutes, until the chickpeas are really crunchy on the outside.

*If you are roasting any potatoes or beets for the vegetable garden, throw them in a separate baking tray and roast them at the same time as the chickpeas.

Peel chickpeas if you want a really smooth hummus. It's really easy to pinch of the chickpeas' 'shell' but it does take some time! I got this tip from Smitten Kitchen.

In a small food processor, chop the garlic, water and tahini together until a smooth, pale paste forms.

Add salt, chickpeas and lemon juice and process until smooth.

If you are only making hummus, garnish with some sumac.

To make your vegetable garden, scoop hummus into any serving dish that you want. I used two small bowls so that there would be enough depth to 'plant' the vegetables.

Sprinkle with as many of the chickpea 'pebbles' as you want.

Stick as many vegetables as you want into your garden. Serve remaining vegetables on a separate serving dish.