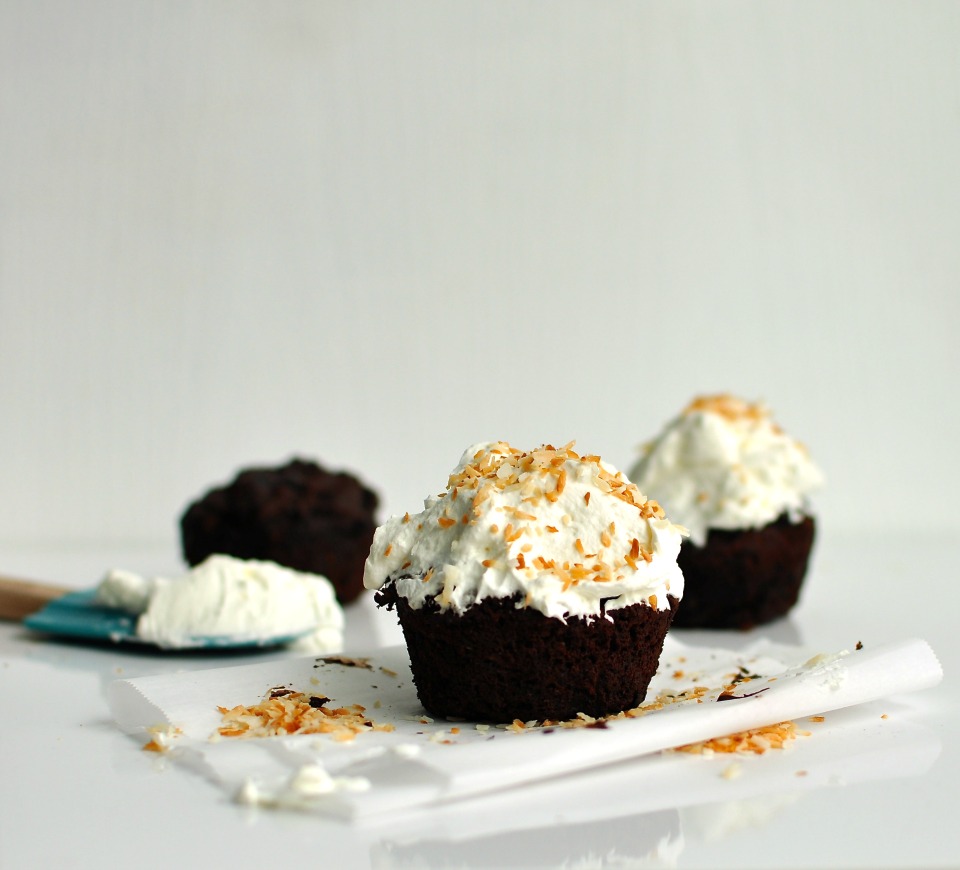 A while ago we had a couple of friends over for dinner. I knew I wanted to make something sweet but didn’t want to bother with anything too fancy or that had any chance of failing, but I always like to try something new when I have the chance. Smitten Kitchen’s chocolate banana bread totally fit the bill (as her recipes often do). It’s something that I’ve been wanting to try as soon as I saw it but our classic banana bread is such a household staple, it’s hard to try “spend” our rotten bananas on something else. Luckily I made the executive decision to try something new, and as our apartment started to smell like the most delectable chocolate muffins, I knew it was a good choice. I didn’t know it then but that was the birth of these double chocolate coconut cupcakes. 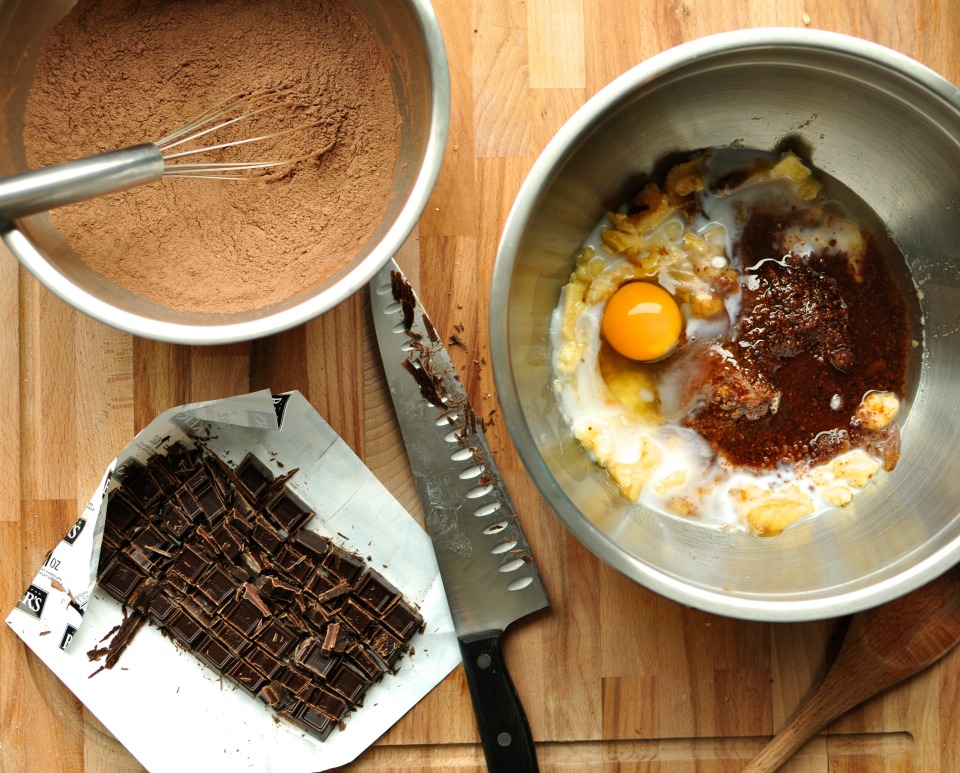 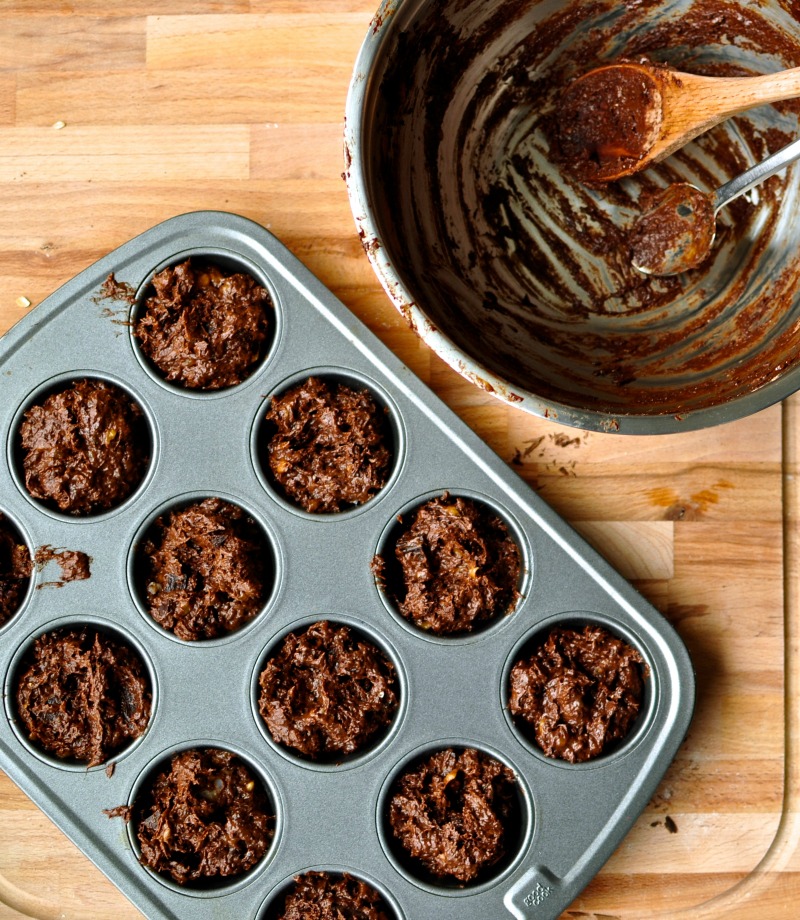 The loaf turned out perfectly. It was moist on the outside and had a great, thin crust on the top. It was double chocolatey with the cocoa powder and the chocolate chunks combined. Surprisingly, it had a really subtle banana flavour. I’m not sure I would have been able to identify it if I hadn’t known. I literally had to wrestle the plate of cake away from my boyfriend after dessert. I decided three giant slices was enough for one night and that I wanted (more importantly) to have some leftovers on hand for the next day. The loaf lasted two days, which is a pretty good sign if you ask me. 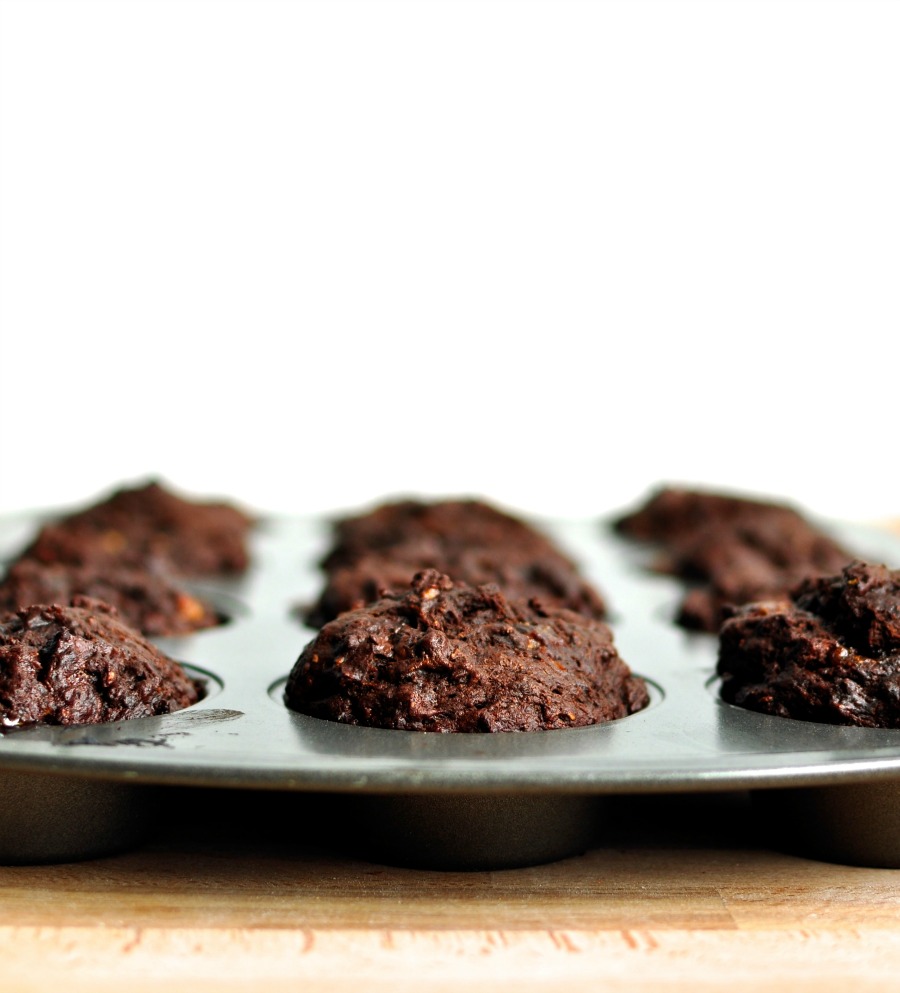 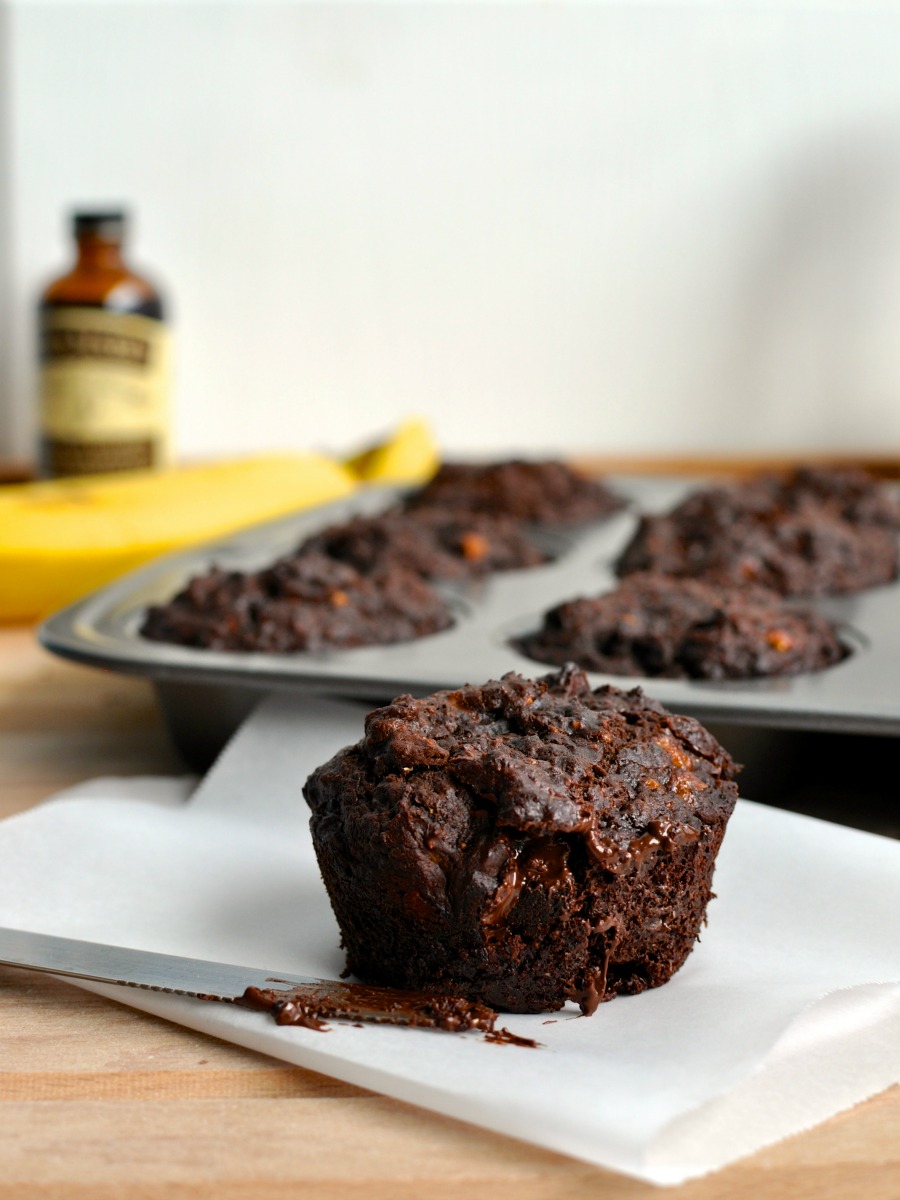 The loaf definitely smelled muffin or cupcake-y right from the start, so it was a natural fit to make them as cupcakes instead of a loaf. This time around, I decided to swap out the butter and brown sugar for coconut oil and coconut sugar. Unlike the banana, the coconut flavor was definitely present. Topped with coconut whipped cream, the coconut flavor is totally amped up. Of course you can just eat these ‘muffin’ style, without the topping but I think that it’s the perfect pairing, and so simple to make too! 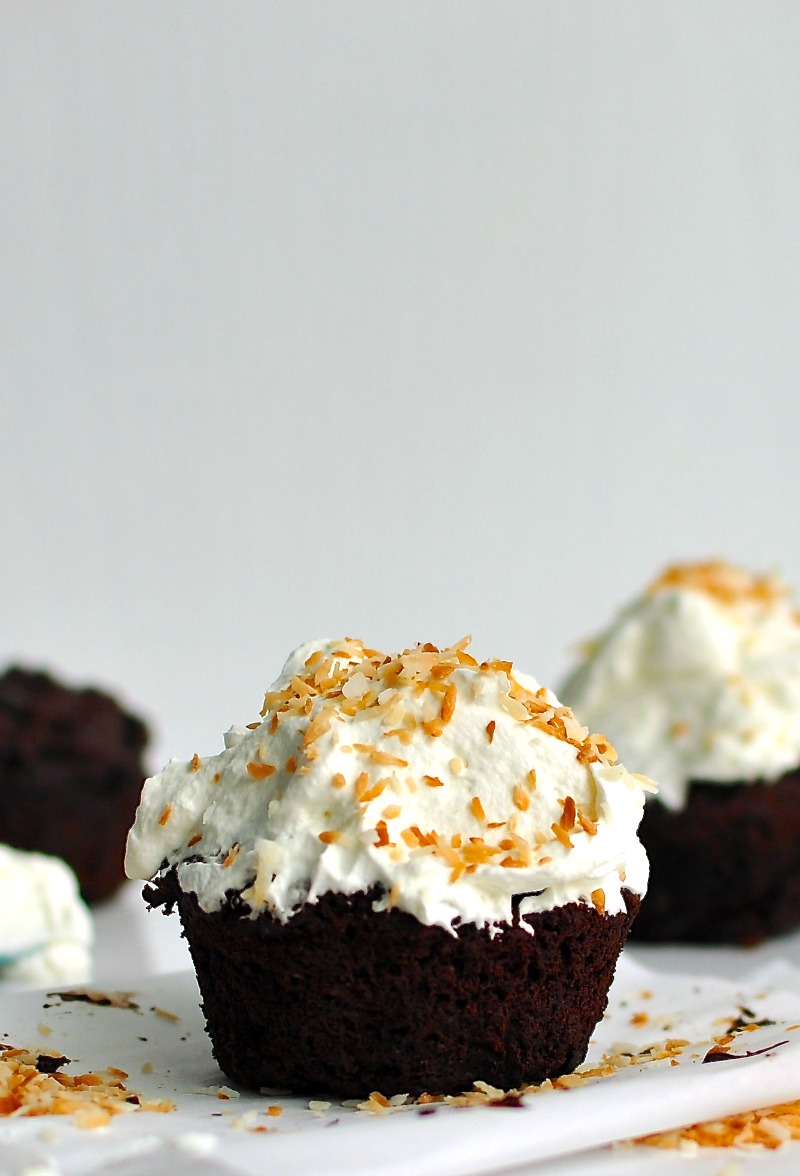 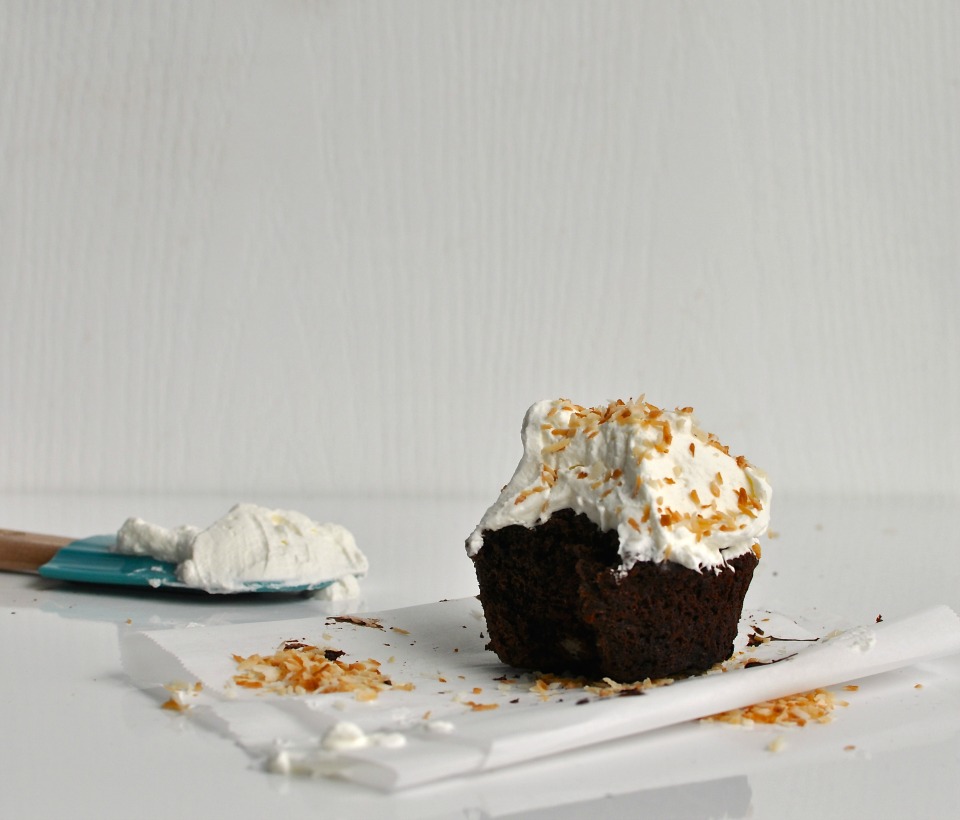 If you're making the coconut whipped cream, make sure to refrigerate the coconut milk overnight so that the cream separates and can be whipped.

Feel free to leave off the coconut whipped cream for a delicious 'muffin'. You can also replace it with regular whipped, slightly sweetened whipped cream.

If you want, you can replace the coconut oil and coconut sugar for equal amounts of melted unsalted butter and brown sugar.

If your bananas are frozen, make sure they come back to room temperature before adding the coconut oil or the coconut oil with harden when it hits the frozen bananas (I learned this the hard way!).

The night before put your can of coconut milk in the fridge to cool overnight.

In a large bowl, mash the bananas.

If your cocoa powder is lumpy, sift it. In a separate large bowl, whisk together the baking soda, salt, flour and cocoa powder.

With a wooden spoon, mix the wet ingredients into the dry ingredients until fully incorporated. Mix in chocolate chunks.

Spoon batter into muffin tin (if you're not using a non-stick pan, make sure to use a non-stick spray).

Bake for 18-20 minutes. A toothpick should come out clean (except for melted chocolate) when they're ready.

When the cupcakes are baking, open the chilled coconut milk and scoop out the coconut cream, leaving the liquid aside.

Use an electric hand mixer to whip the coconut cream until thickened. Add sweetener, to taste.

Garnish with some toasted coconut flakes and shaved dark chocolate.