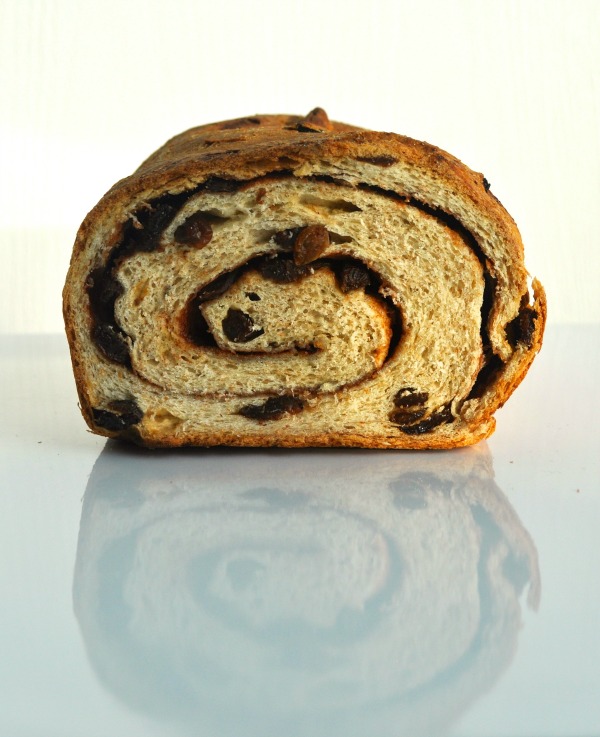 Who doesn’t love raisin bread? I feel like everyone should love raisin bread! If this is the case (and it might not be) I find it very surprising that over the past few years, and places that we’ve lived, we have found it pretty hard to find raisin bread in bakeries (shame on you Vancouver and Calgary). I am not claiming that we have done a thorough investigation on the raisin bread front, but whenever we have gone to bakeries, we have never come across a nice loaf of raisin bread. In my mind, raisin bread is a pretty normal thing to have around. My boyfriend used to work at a German bakery in Montreal and they sold the BEST raisin bread in the world. I have to admit that it was a more dessert-like bread, made rich with quark and crusty with a sugary top. 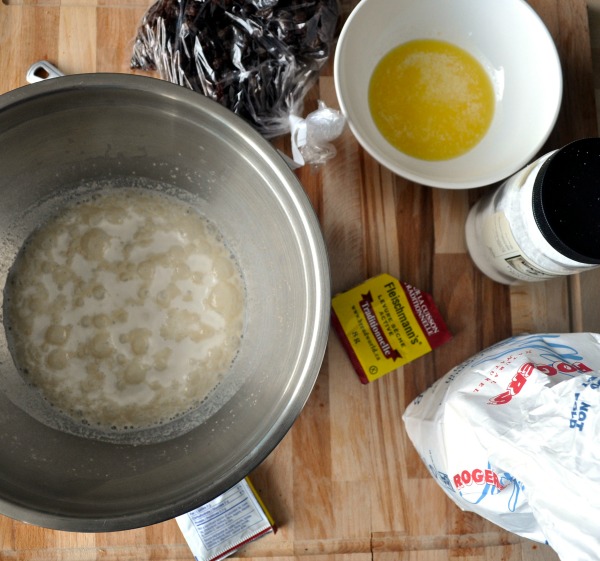 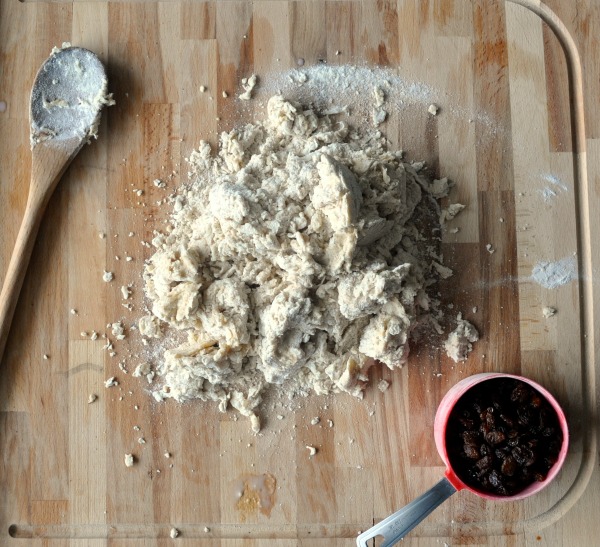 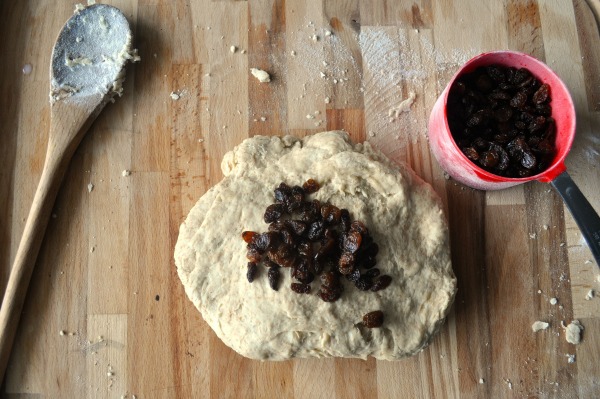 I am sorry if that got you excited, but I wasn’t really trying to replicate that when I made this loaf of bread. As I was writing that, I started to question why, in fact, I wasn’t trying to replicate the glory of that raisin bread (you may be seeing another raisin bread on this site eventually) but my boyfriend has been requesting that I make a loaf for a while now. 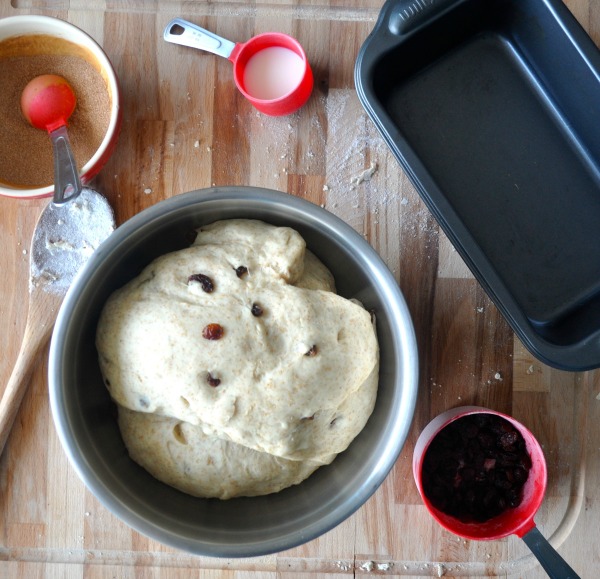 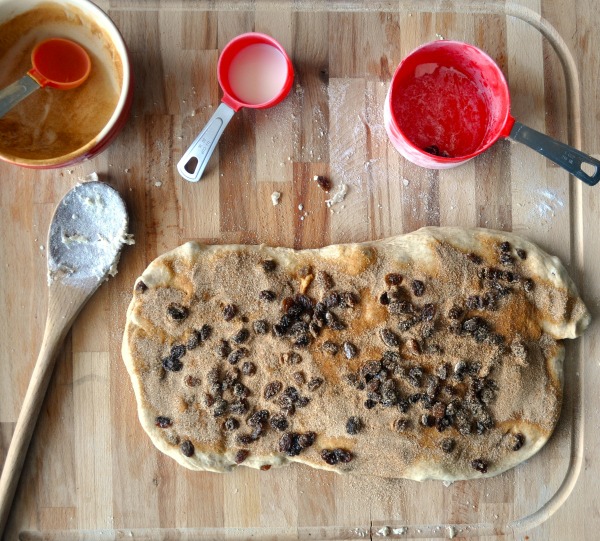 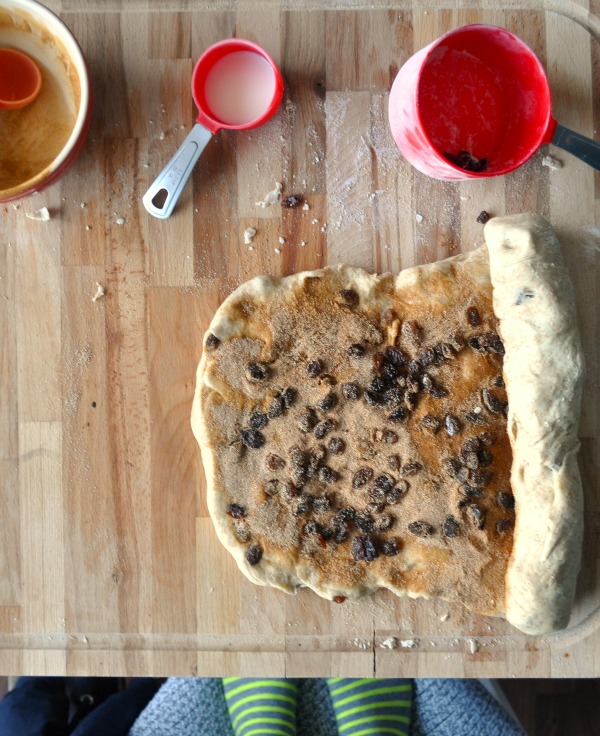 I have to admit, this was almost a complete failure. I started with the first step (as I guess is the right order of things) and put the yeast in the warm water and milk for it to froth up and nothing happened. I was pretty annoyed since I had kind of re-arranged my whole day around making this bread. I know that sounds crazy but I have a pretty short window with light these days and bread does take some time to make. Anyway, when the yeast doesn’t froth up it means that it is dead (for whatever reason, it’s too old, I killed it because the water and milk were too hot etc) and the bread won’t rise, so I threw the mixture out and tried again. Once again, nothing happened after ten minutes and I decided to just give up. Luckily, I wasn’t too keen on cleaning up and a few minutes later when I wandered past the bowl, it was all frothy. Hooray! Moral of the story: make sure your mixture froths and be patient! 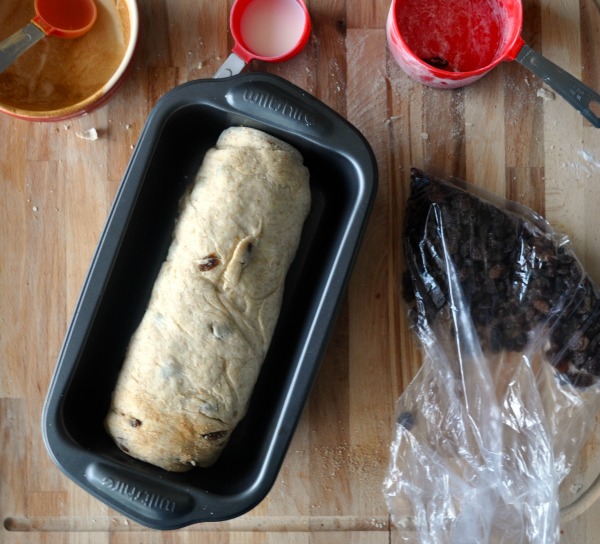 Anyway, I’m really happy that everything worked out because this bread is exactly what I wanted. Let me be clear, this is a bread recipe and not a cake recipe. The bread itself is a little bit heartier from the whole wheat and the amount of raisins are perfect, although for a split second I wished I had added more. The cinnamon swirl is sweet but not too sweet making this totally acceptable as a piece of toast for breakfast and totally amazing (I can only imagine) as French Toast. 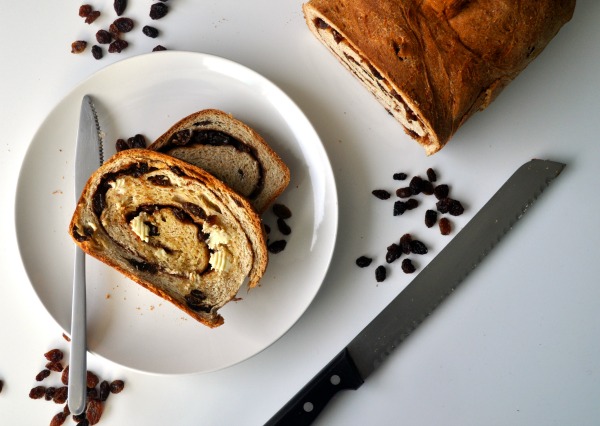 I don't see why this wouldn't work with white bread flour but I haven't tested it. I like the taste and texture of the whole wheat personally!

My bread rose super quickly so just keep an eye on it. Once it's doubled, you can move on to the second rise and once it's crested the lip of the pan you can put it in the oven.

Heat up water and milk until they are at body temperature.

Whisk in 1 tablespoon of sugar and sprinkle yeast over mixture.

Wait about 10 minutes, until the mixture is frothy. If it doesn't froth up it means your yeast is dead and the bread won't rise!

Add flour and mix until the dough starts to come together into shaggy pieces.

Dump dough onto a surface (feel free to flour the surface a bit, but I didn't have to) and knead for about 3 minutes until dough starts to come together. Incorporate 3/4 cup of your raisins (I did this about 1/4 cup at a time) by kneading them into the bread.

Knead for an additional 7 minutes, until dough is smooth.

Place dough in a bowl, and cover with cling wrap or a kitchen towel and let rise for 1 1/2-2 hours, until doubled in size.

Once double in size, remove from bowl and press the dough into a rectangle. The rectangle should be about 6 inches wide and 12 inches long.

Mix granulated sugar and cinnamon together in a small bowl.

Moisten the dough with about 1 tablespoon of milk and sprinkle the cinnamon sugar mixture on top. Add the remaining 1/4 cup of raisins.

Roll dough tightly (along the shorter side).

Once dough is rolled, press seam together with your fingers and place in a 9 x 5 loaf pan, seam side down. The ends of the dough should be touching the ends of the pan (see photo above).

Cover and let rise for another 45-60 minutes, until the loaf pan is filled and the dough just crests the lip of the pan.

About 15 minutes before the end of your second rise, preheat your oven to 350F.

Bake for about 45 minutes, until golden brown and hollow sounding when you knock on the bottom.

Let cool completely on a wire rack before slicing.