Whenever I am thinking of what to make for dinner, I always forget about veggie burgers. I don’t know why because it is a filling, relatively easy and versatile meal. I used to always have some in my freezer ready for a quick and satisfying dinner, but I haven’t made any since we moved. I used to make fava bean burgers from Ottolenghi’s cooking Plenty all the time, but the last time I made them they were a bit off so I decided to go a different route. 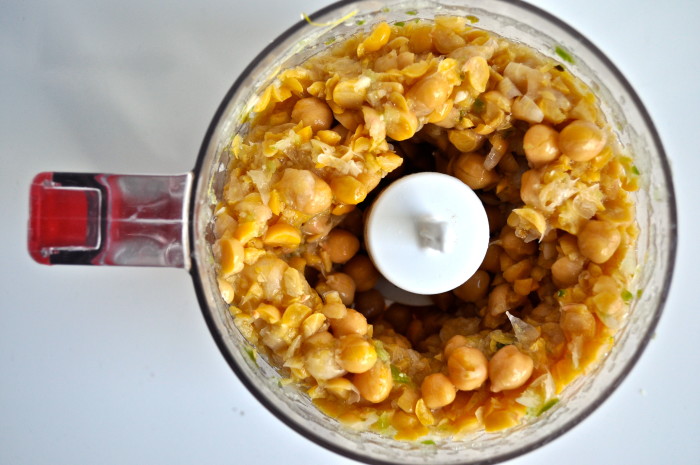 To me, there are two types of veggie burgers. The ones that rely heavily on meat substitutes like tempeh that are quite firm and rubbery (but not necessarily in a bad way). Then there are the ones that are made mostly with legumes and other grains. When done poorly they border on mushy and when done well they are crispy on the outside and delicate on the inside. These are the latter. They are a little delicate to cook but hold their own once a nice golden-brown crust forms on the outside. I had no trouble flipping mine, but if you feel like your mixture is too loose, you can add a 1/4 cup more oats to soak up the liquid. 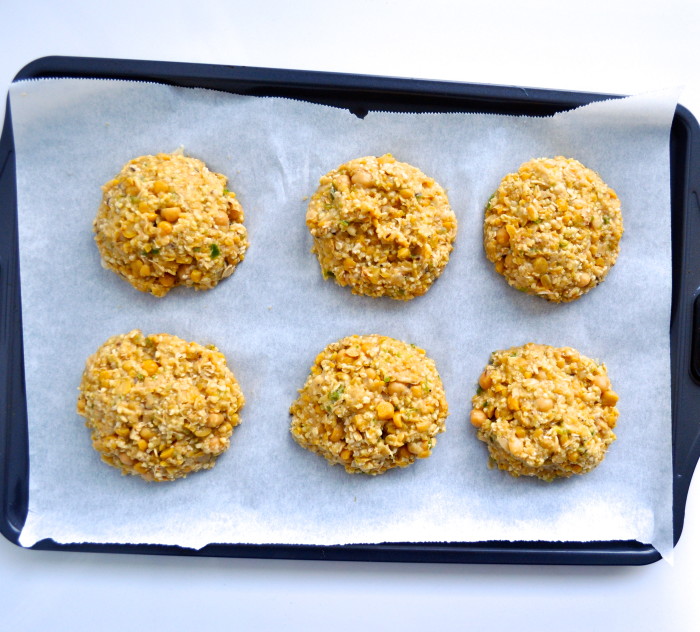 Originally, I wanted to make a black bean burger because I never know what to do with black beans and I figured it would be a good opportunity to pull out a can and make some southwest inspired burgers. I don’t know when but I guess I used black beans at some point in the past few months because we didn’t have any cans on hand, so I went with chickpeas instead. I’m not complaining because these chickpea burgers are just plain tasty. I think a lot of that has to do with the spicy, smokey flavor of the harissa. I little bit goes a long way! I like how I had everything to make these on hand and I could just throw them together. They are leaps and bounds better than any frozen ones I have ever come across, and with a little bit of effort you have a few backups for future meals. 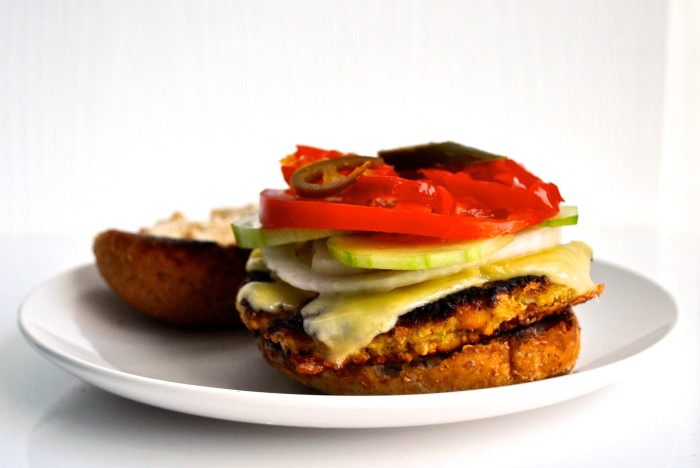 If your patties are a little loose, add a bit more oats or just be careful when you are cooking them. Once a nice golden, brown crust has formed on the outside they will hold together fine!

If you are freezing some of your patties place shaped patties on a parchment lined baking sheet and place in freezer until frozen. Once frozen, wrap in plastic wrap and transfer to plastic bag. To cook from frozen, allow patties to defrost before cooking.

Bring a small pot of water to a boil. Add millet and cook until soft, about 20 minutes.

In a food processor, chop onion, garlic and serrano pepper. Transfer to a large bowl.

In the food processor, roughly chop chickpeas, leaving some texture. Mix in with onion mixture.

Chill mixture for 30 minutes to allow it to firm up.

Measure out your patties using a 1/2 cup measuring cup. You will get 7 patties.

To cook patties, heat up a skillet on medium-high heat and add some canola oil. Cook for about 3 minutes on each side. If you are having cheese on your burger, place the cheese on the patty after the first flip so that it can melt.