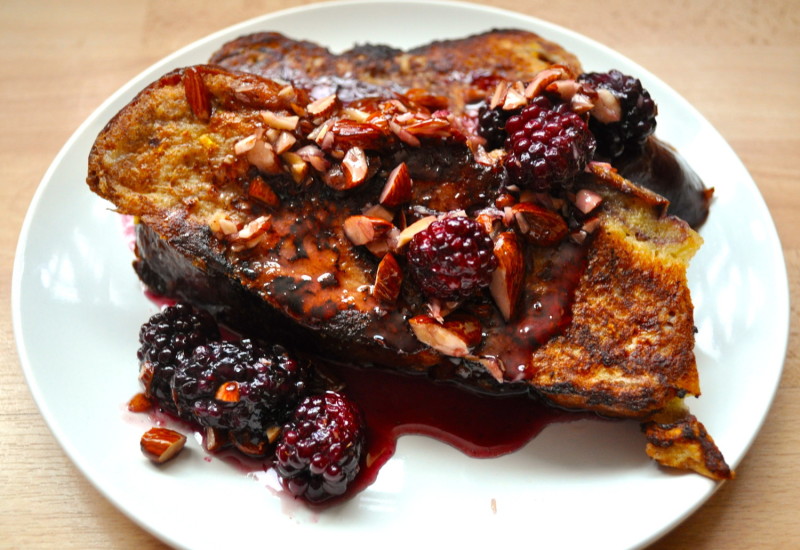 I’ll admit, I ate this for dinner, and what a glorious dinner it was! I made some blackberry filled Challah dreaming of the french toast that it would eventually become. I threw half of the loaf in the freezer (it is a huge loaf of bread) and waited patiently for Sunday night when I could whip the second half into the most awesome meal ever.

More often than not, we reserve french toast as a special-occasion brunch meal (usually not made with homemade bread to boot) but I couldn’t think of anything better to use this blackberry challah for. I think it’s clear how I’m going to use its frozen brethren in a few weeks. 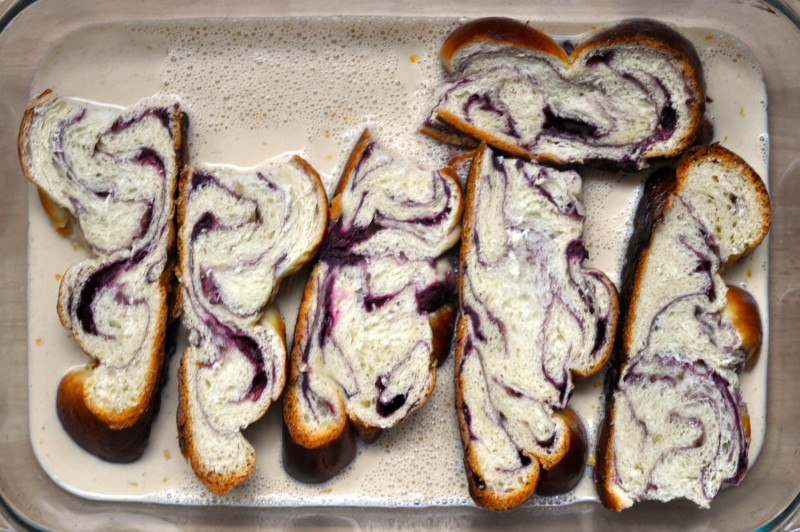 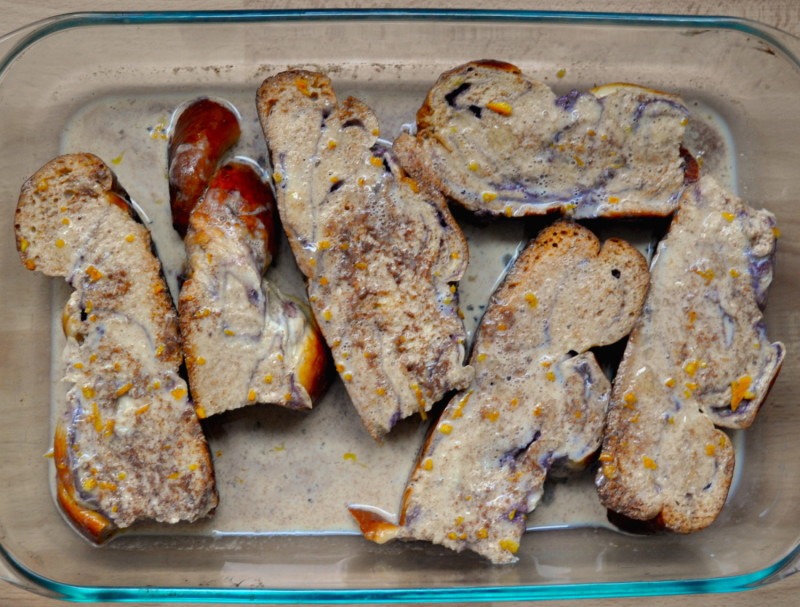 It was ridiculous how good it was. Recently, two things have revolutionized the way that I make French toast.
1- Cut your bread thickly so that the inside can be cooked in a way that it is still moist and custardy without being either raw or overcooked. However, if you cut it thicker than 1-1 1/2 inches, it will not cook through without the outside burning, so use your oven if you go that route.
2- Let you french toast soak in the milk/egg mixture. I used to just dip my bread quickly in the mixture and put it straight in the pan. More often than not that resulted in the mixture not making its way through to the center of the french toast. Believe me, soaking makes a huge difference in the texture and overall deliciousness! 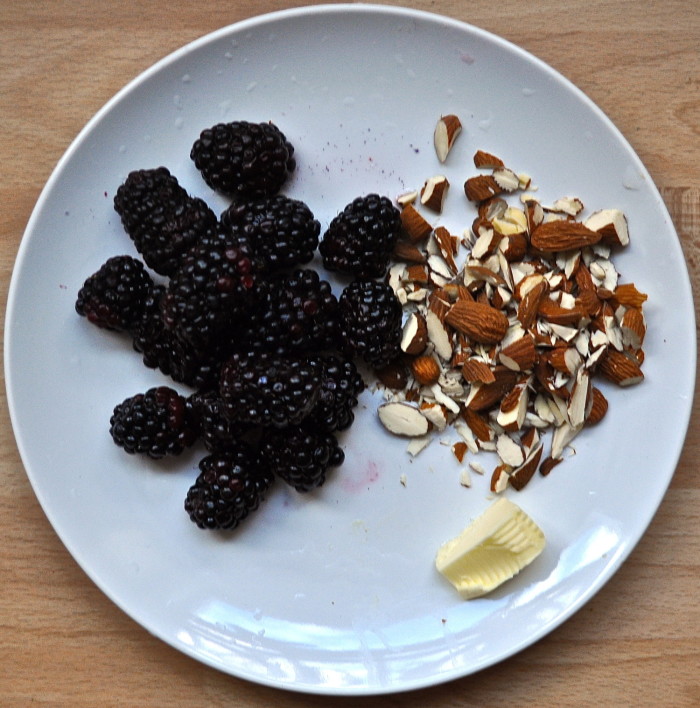 As if this dinner wasn’t ridiculous enough, I thought to myself, wouldn’t it be fabulous if the maple syrup was extra special too? So, I decided to cook the blackberries that I had intended to serve fresh with the french toast in the maple syrup itself, along with some almonds and butter. The result was a fruity, purple, crunchy, maple syrup topping. The only thing that I regret is that I didn’t have even more blackberries to cook in the sauce, so I suggest a larger amount below. 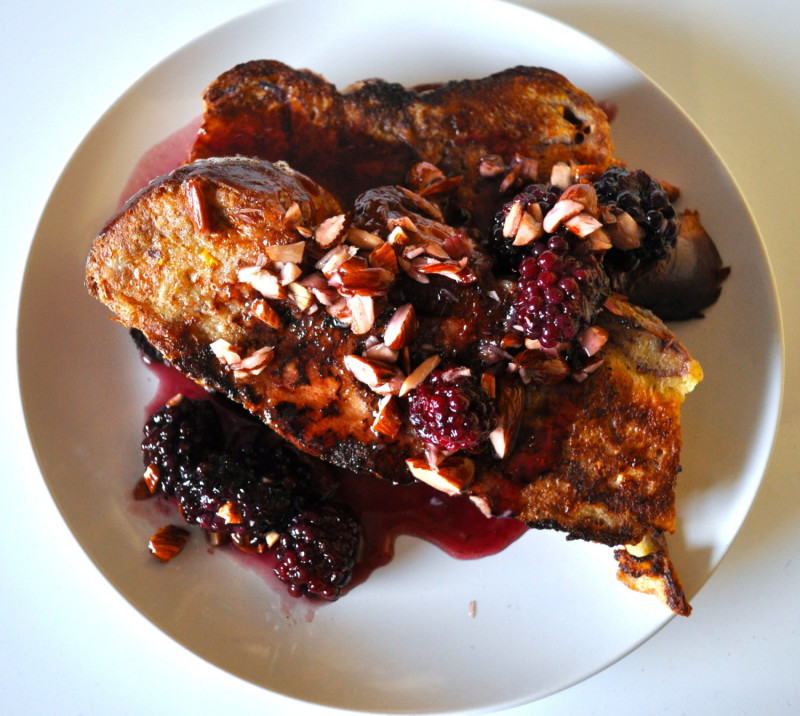 The most important thing in my books when you make french toast is to cut your bread thick and let it soak in your egg/milk mixture for as long as it takes for the bread to soak up all of the milky goodness (about 45 minutes usually). This means that the inside of your bread isn't dry and flavorless but custardy, soft and delicious.

You can use whatever bread you want for this, but it's best if it isn't pre-sliced so that you can control the thickness of the slices yourself. Also, I'm sure the maple syrup sauce would be delicious with raspberries.

In a small bowl, whisk together all of the ingredients.

In a large pyrex dish that can fit all of your bread, pour mixture. Lay bread on top of mixture and let it soak in for about 20 minutes on each side, until most of the mixture is absorbed.

Heat up a large pan and a small pan on medium heat. Melt one tablespoon of butter in each pan. Your large pan should fit 4 slices of bread, the small one 2 slices. Cook slowly, on low-medium heat, so that the outside doesn't burn while the inside is still raw. About 3-4 minutes on each side.

Transfer all of the french toast to the large pan to keep warm (you can use your oven, but I couldn't be bothered and this worked just fine), while you make your blackberry maple syrup.

Melt butter in small pan over medium-high heat. Add almonds and blackberries and cook in butter until almonds develop some colour. Add maple syrup and simmer for 5-7 minutes. Blackberries should be breaking down and soft. Maple syrup will take on a nice purple hue.