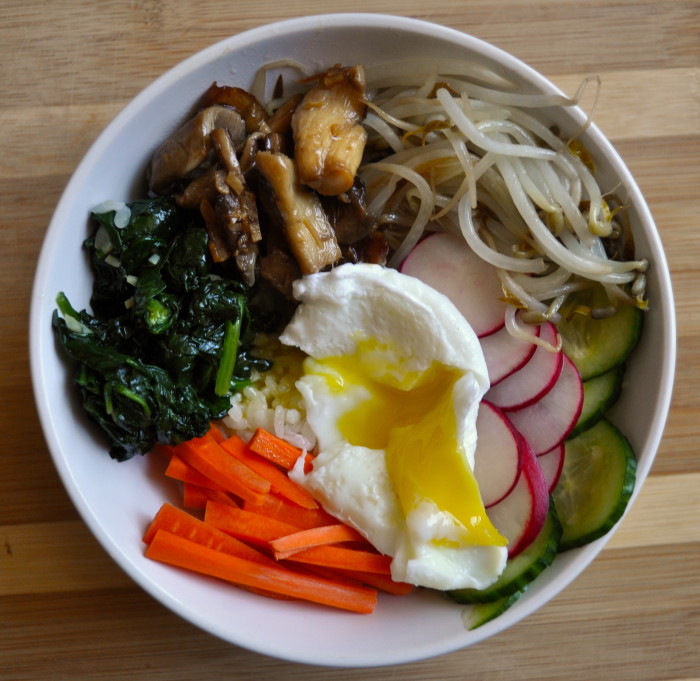 We couldn’t bring the majority of our pantry staples with us when we moved. The movers warned us that any bottle with liquid in it was liable to explode on the way to Calgary because of fluctuations in temperatures, so as much as it was hard (and costly) to part with all of our jars and cans, no one wants fish sauce all over their things. As a result, I was ‘forced’ to go wild when it was time to re-stock our kitchen with the basics. For all of our Asian ingredients we made an excursion to T & T, a giant Asian supermarket with everything I could ever hope for. One of the things we picked up was kimchi, which I’ve never cooked with before, and I had no idea what to do with it. 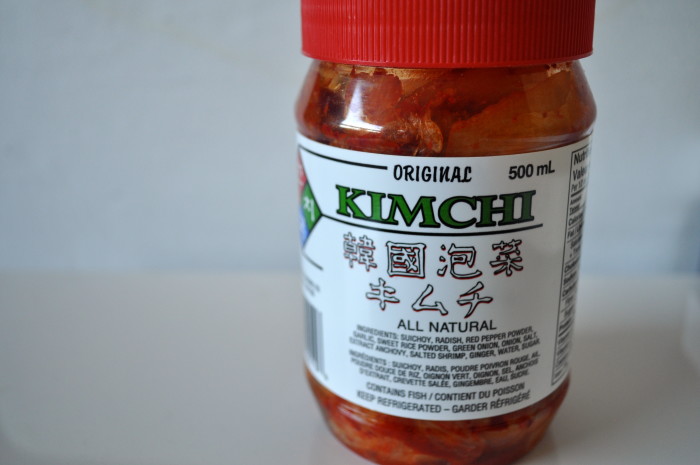 Kimchi is traditionally used in Korean cuisine. Simply put, it is spicy, fermented vegetables. I always thought that it was made strictly with cabbage but there are many varieties that use vegetables like radishes, potatoes and cucumbers. Traditionally, it is fermented underground in jars but I’ve seen plenty of posts online of people making it themselves at home. I just used the jarred stuff for this recipe but if you feel inspired, there are plenty of resources online that can guide you in terms of how to make it yourself.

Personally, I don’t have much experience with Korean food. The main reason for this is that it is a cuisine that I always think of as being very meat-centric. However, in my experience, you can always rely on the trusty bibimbap if you are a vegetarian and find yourself at a Korean restaurant. Bibimbap is essentially rice with vegetables. It is often served with beef but is easily made vegetarian. The most common way that I have seen it served is in a stone pot (which makes the rice at the bottom and sides crunchy and delicious), topped with both raw and cooked vegetables and a poached or fried egg (this dish is specifically called ‘dolsot bibimbap’- dolsot refers to the hot stone). And, of course, served with Kimchi and hot sauce! 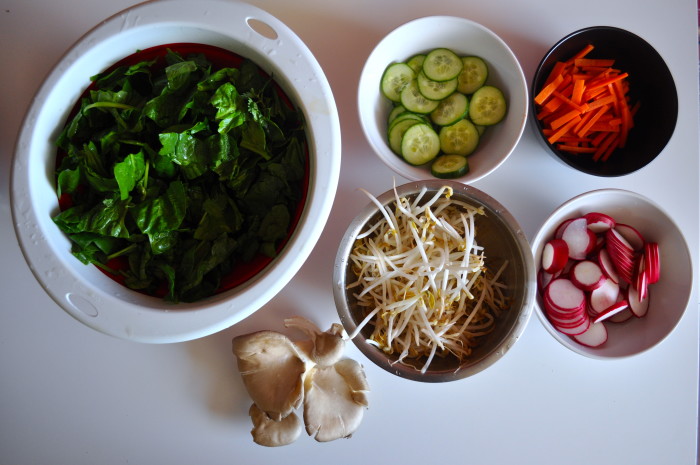 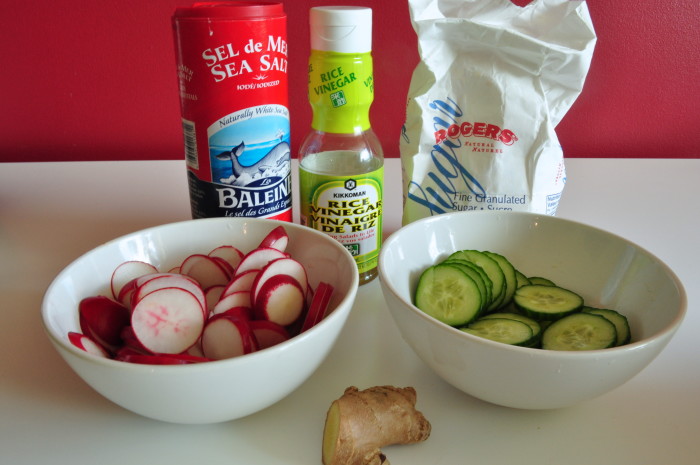 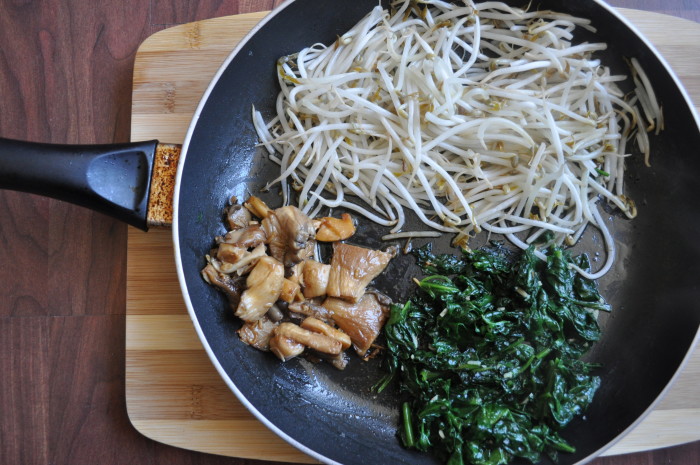 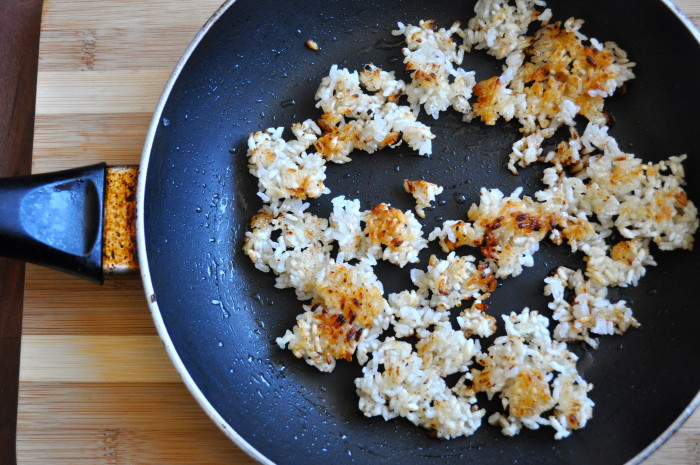 This meal is light and can be adapted in whichever way you want. Want some extra protein? Add some tofu! Hate radishes? Leave them out! However, I did enjoy the balance between pickled, raw and cooked elements in the recipe below. The crunchy rice adds a wonderful texture and is well worth the extra 5-7 minutes in cooking time. Also, if you don’t like the idea of kimchi, but are interested in bibimbap, the dish would be great with hot sauce like Sriracha. 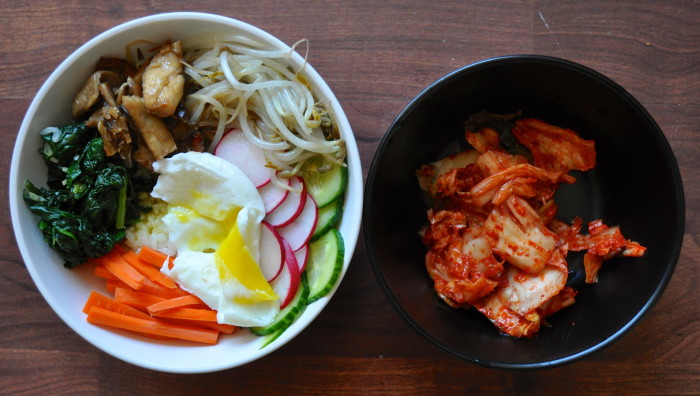 In the end this was actually quite time-consuming to make, mostly because many of the vegetables are prepared differently and on top of that you have to make sure that the rice, egg, and vegetables are all hot when it comes time to serve. While it may not be an dish to make after an exhausting day at work, it is a really fun and versatile meal and you can always cut down on time by cooking all of the hot vegetables the same way and pickling the cucumbers and radishes together.

Make sure that the yolk of your egg is runny. It helps to provide a 'sauce' for the rice and vegetables.

To make your pickled vegetables, on the bottom of a small bowl, whisk together half of the rice wine vinegar, water, sugar and salt. Add sliced radishes. Mix well to ensure all of the vegetables get some liquid on them.

In a second small bowl, repeat this process, with the addition of the ginger, for the cucumbers.

Set both bowls aside to allow radishes and cucumbers to pickle.

To make your rice, measure out 1 cup of uncooked, short grain rice and cook according to instructions on the package (I covered mine with 1 1/4 cup of water and simmered, covered for twenty minutes).

While the rice is cooking, wash and prepare (chop) the rest of your vegetables. When they are ready, heat a large pan with 1 teaspoons of canola oil and mince 3 garlic cloves and 1 teaspoon of ginger. Add 1/3 of the garlic mixture to the pan and allow to turn golden. Add chopped spinach and cook until wilted. At the same time, heat up a smaller pan with 2 teaspoons canola oil. Add the rest of the garlic and the ginger to the second pan. Once they turn golden brown, add the chopped mushrooms as well as 2 tablespoons of soy sauce. Cook until mushrooms are brown and released their juices. Push spinach to the side of the large pan and add your beansprouts and sesame oil. Cook until wilted.

Once your rice is cooked (you should have about 3 cups of cooked rice), take aside 1 cup of cooked rice and add to a hot pan with 3 tablespoons of canola oil (you can use the same small pan you cooked the mushrooms in). Press the rice down into an even layer and cook until golden brown. Flip the rice over and cook the other side until brown as well.

Drain pickling liquid off of both the radishes and the cucumbers.

Fry or poach one egg per person.

Make sure to season crunchy rice with some salt.

For each serving, put the crunchy rice on the bottom and top with cooked rice, vegetables, and egg.