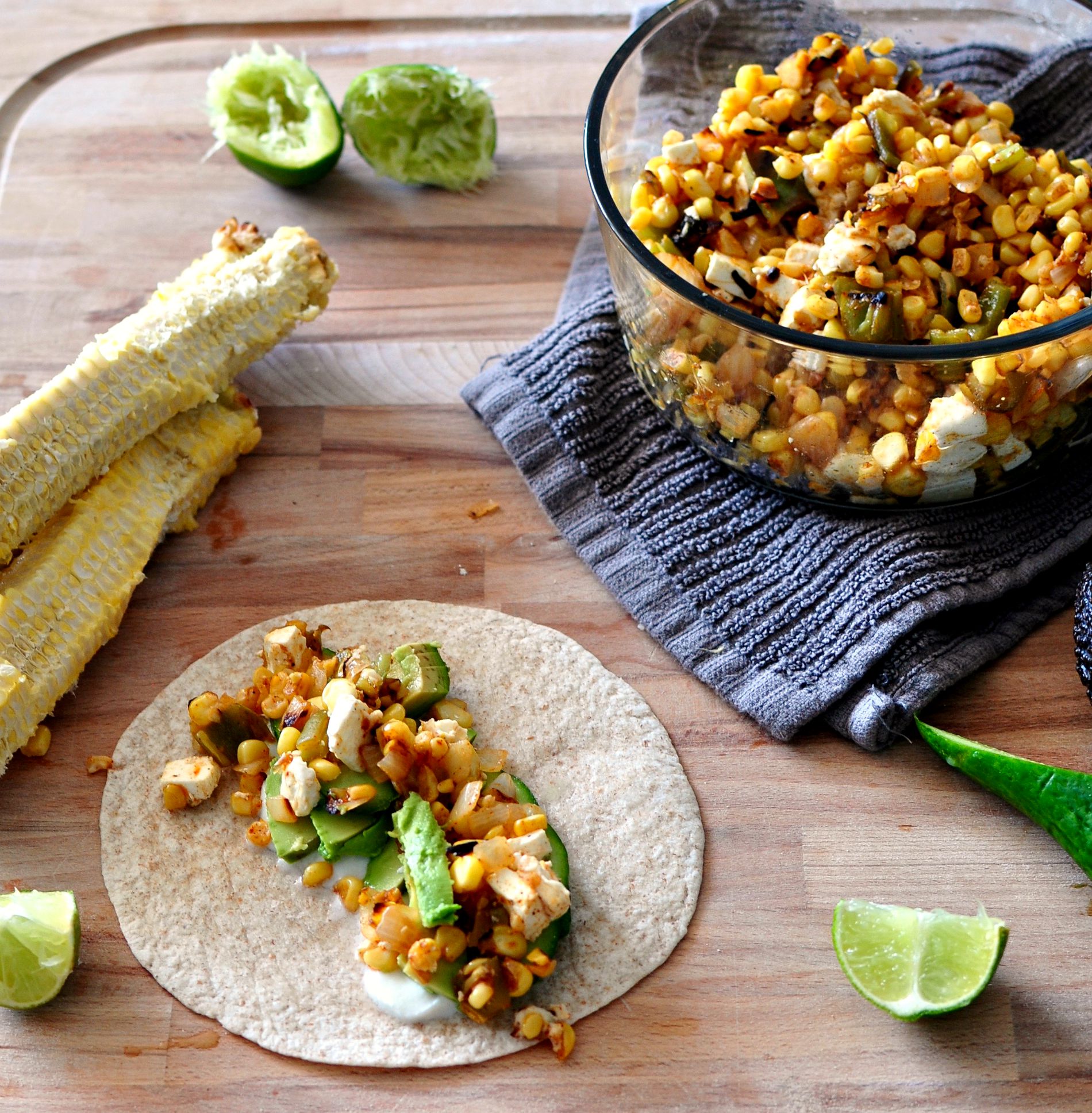 As the summer races to an end, I am trying to take advantage of all of the corn, cherries, and peaches that I can. Simple is always best, I love eating my cherries and peaches raw and the best corn in my books is charred, slathered in butter, salt and pepper. But, if I want to make a meal out of the corn, this is the best way to do it. I love how I can buy a couple of ear of corn and feta and end up with a deeply delicious and satisfying dish. I came across a very similar version of these charred corn and pepper tacos years ago on Smitten Kitchen. Since then, I have made it countless times for the two of us, friends, and family brunch. They are a super easy, dependable meal that tastes delicious and comes together in no time at all. 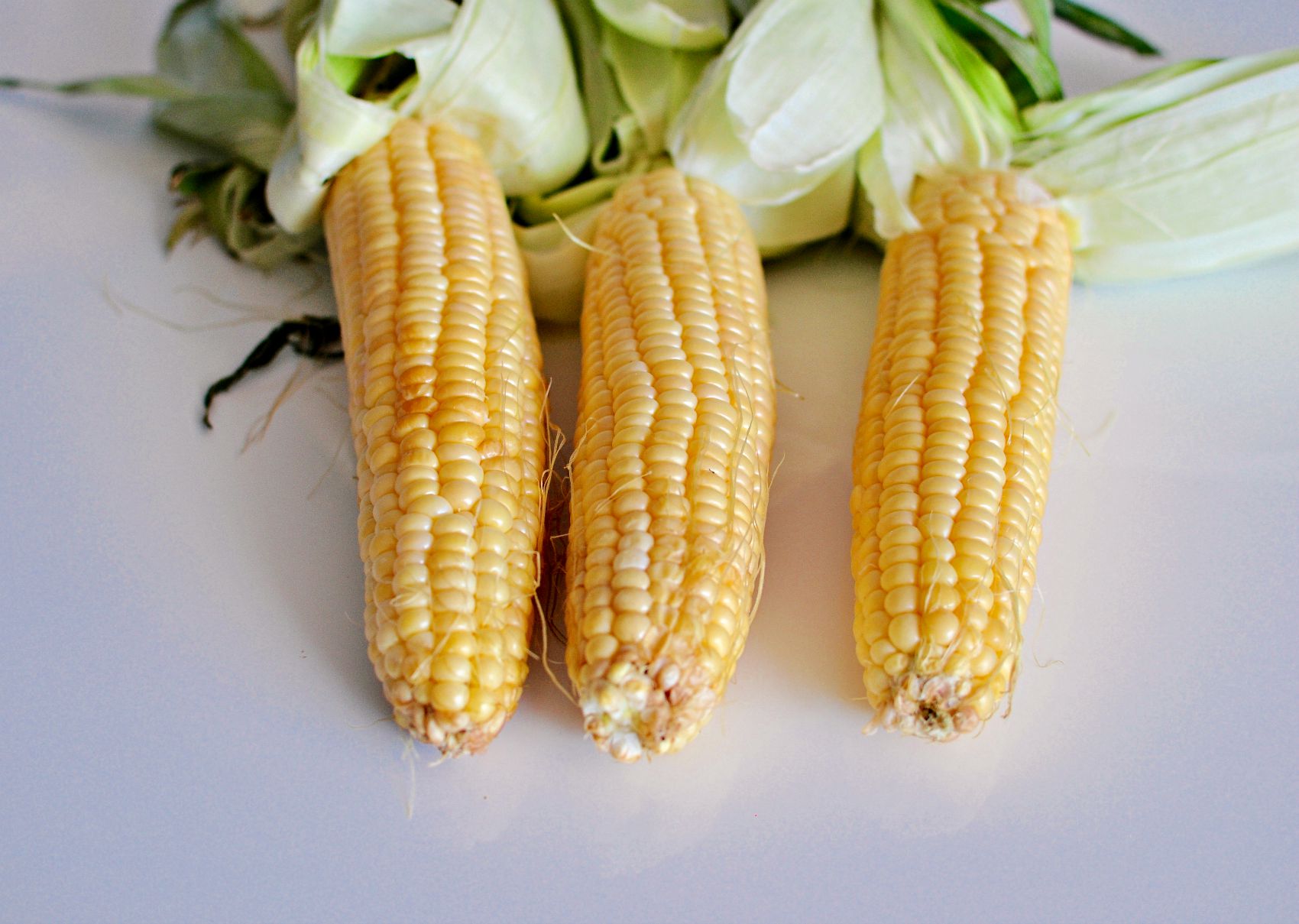 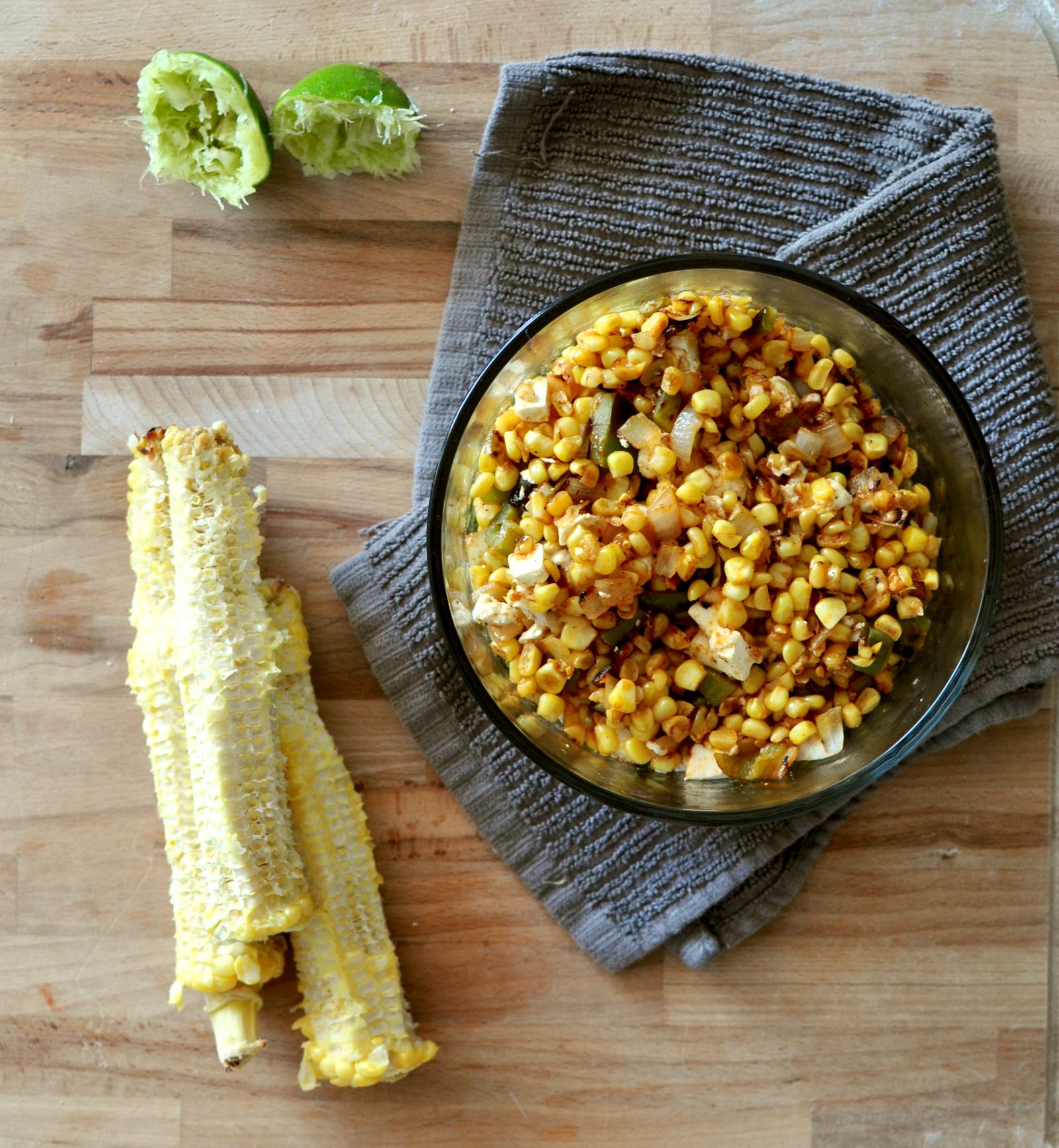 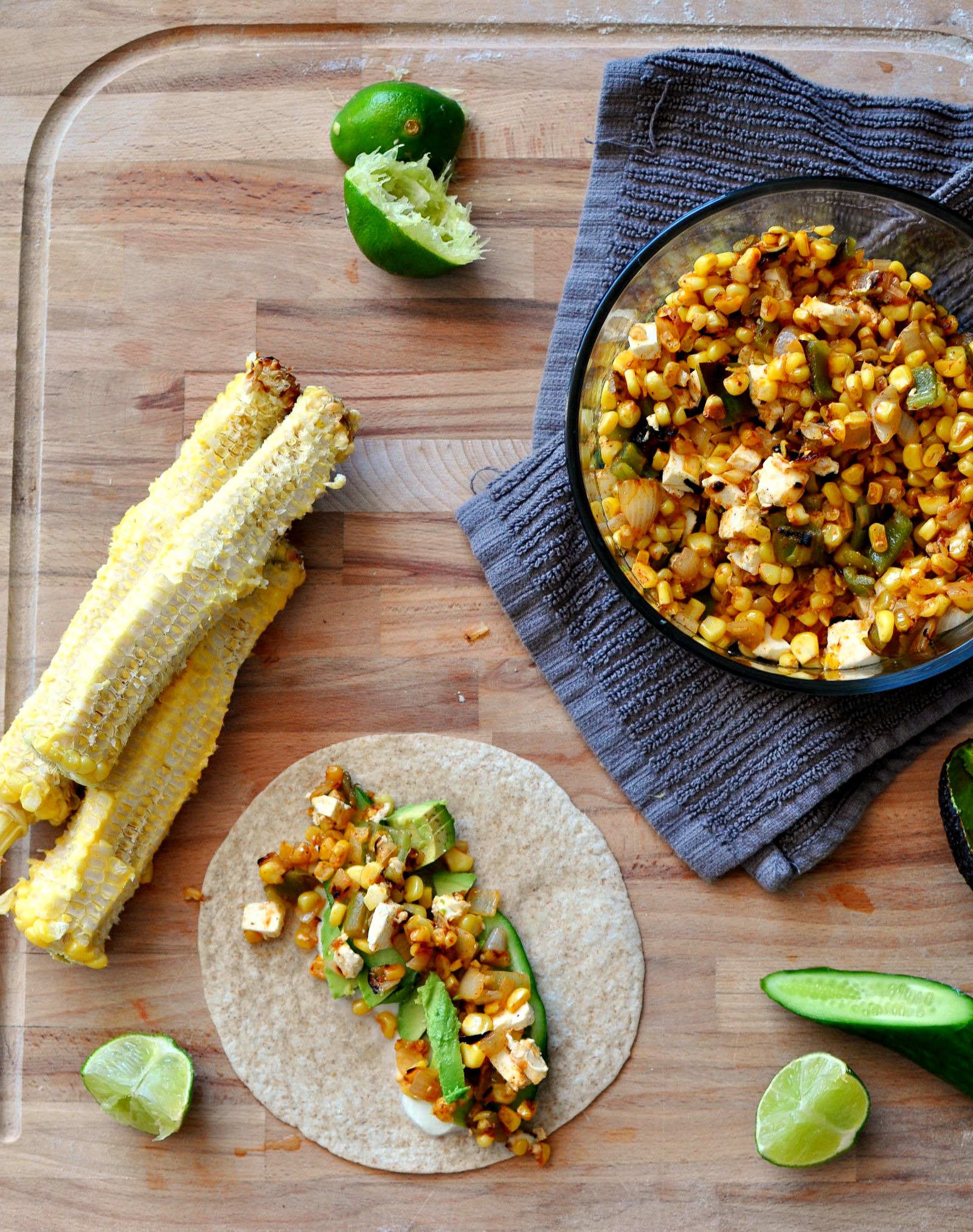 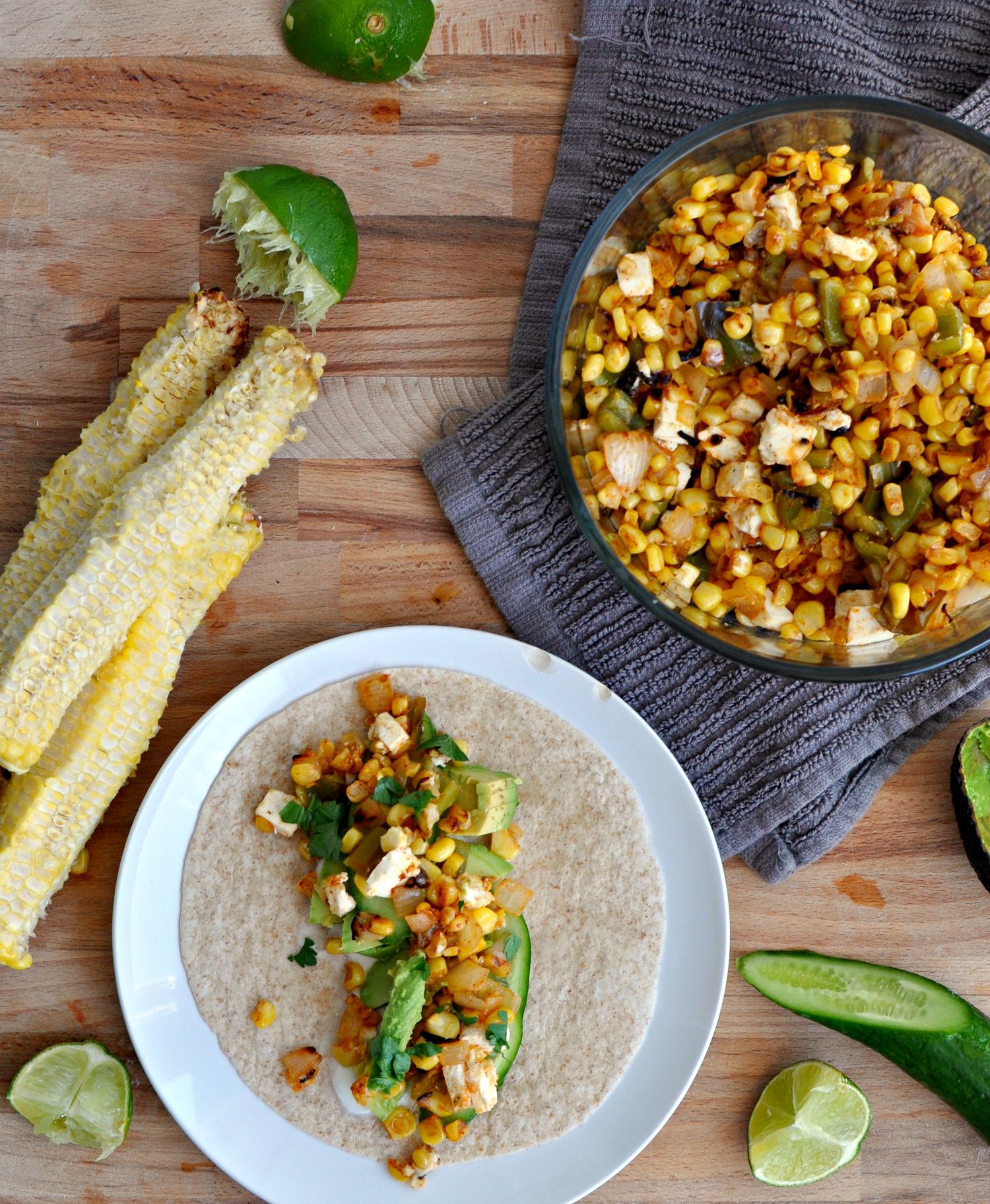 The lime in the corn transforms the sweet corn and slightly spicy peppers into something so much more flavourful and bright. The feta gives cheesiness, but more importantly saltiness to the dish. Paired with fresh cucumber, avocado or radish (preferably all three!) and creamy salted yogurt or sour cream, these tacos have it all. If you’re lucky enough to have a gas stove or a BBQ, this is the time to use it. I used to love charring the corn over an open flame. There’s nothing that can replace that flavour. These days I just roll the cobs around in a dry pan, over high heat and try to get some char going. Either way, it’s a perfect vegetarian weeknight meal. 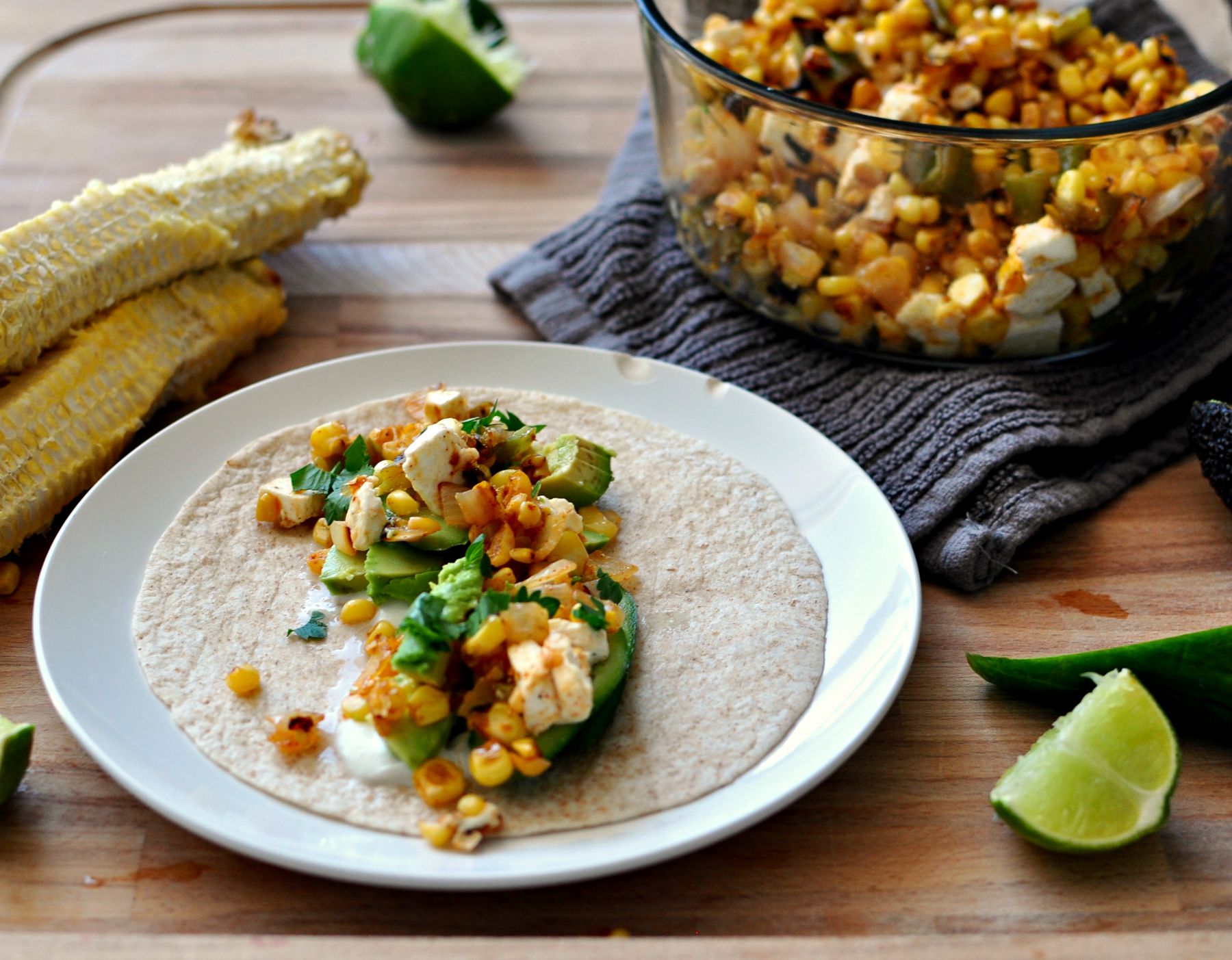 If you want to save some time, I have made these without the peppers (this means no oven!) and they are still delicious.

If you don't have a gas stove or BBQ where you can char the corn, I usually just roll it around a very hot, dry pan to get some char on. It definitely doesn't work as well but it's still delicious.

Don't skimp on the lime juice! It makes the dish come together.

Turn oven on to the highest temperature, on broil.

Place the peppers on a tinfoil lined baking tray and place in oven until the skin is charred, about 10 minutes.

Remove from oven, slice peppers in half, remove seeds and any skin that peels off. Slice into strips and set aside.

Char your corn over a gas stove or BBQ. If you don't have one, place the cobs in a dry pan over high heat and let it char a bit.

Let the cob cool and remove the kernels from the cob.

In a large pan heat up the butter and olive oil.

Add corn kernels and saute until cooked, for 3-5 more minutes.

Add feta and the juice of one lime.

Turn off the heat and taste and adjust seasoning (lime, salt, and cayenne).

To assemble your tortillas, heat them up, slather some sour cream or yogurt. Add a few spoonfuls of the corn mixture, a couple slices of pepper and top with cucumber, radish, avocado and some fresh cilantro.

Serve with lime wedges for some extra zing.