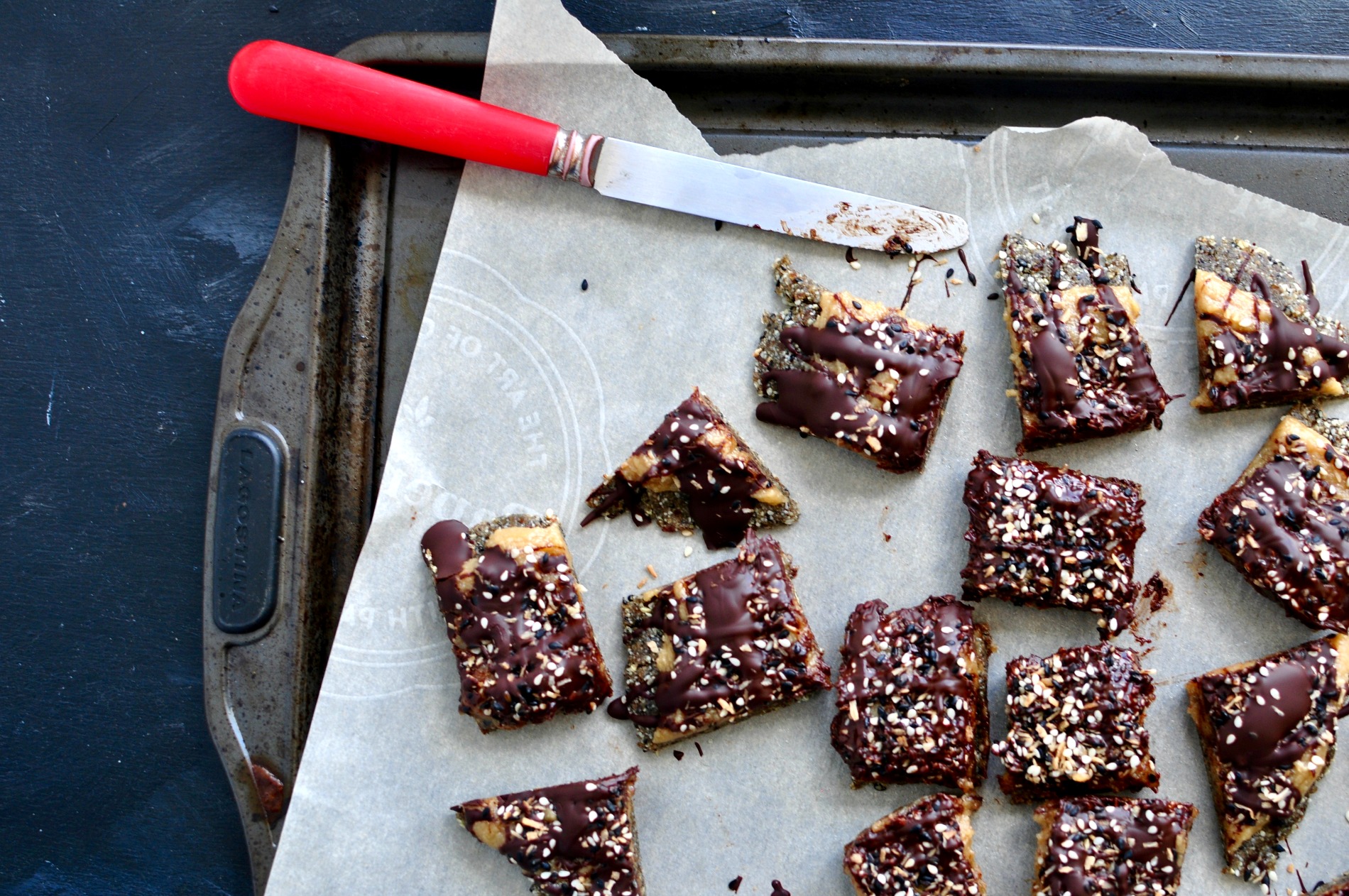 Masterchef Australia is back and I love it just as much as ever. On the program, there is something called a mystery box challenge where the contestants are given a limited number of ingredients to work with and are judged on their creativity and the deliciousness of the dish. Right now, I feel like I am in a mystery box kitchen. We are moving from our apartment at the end of this month and I have been working hard to use up all of the ingredients that we have left in our kitchen. I’ve been doing pretty well so far, slowly making my way through all of the grains and cans of beans that I usually stock up on but as it dwindles, I am having to get creative. I realized that I had an abundance of sesame related things: tahini, white and black sesame seeds laying around and that was where these sesame squares came from. I probably would have never thought of them without the pressure of wanting to not let anything go to waste. 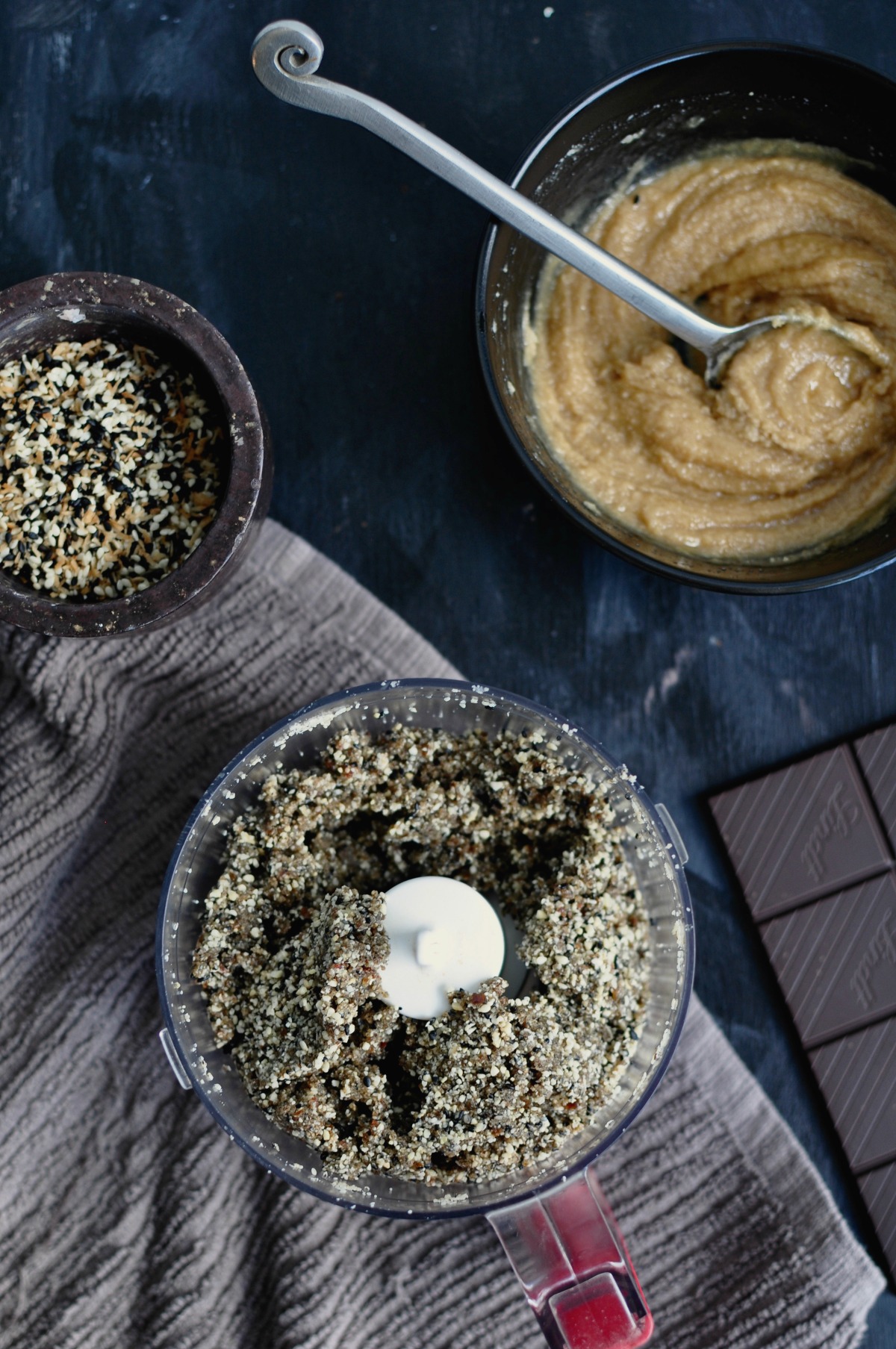 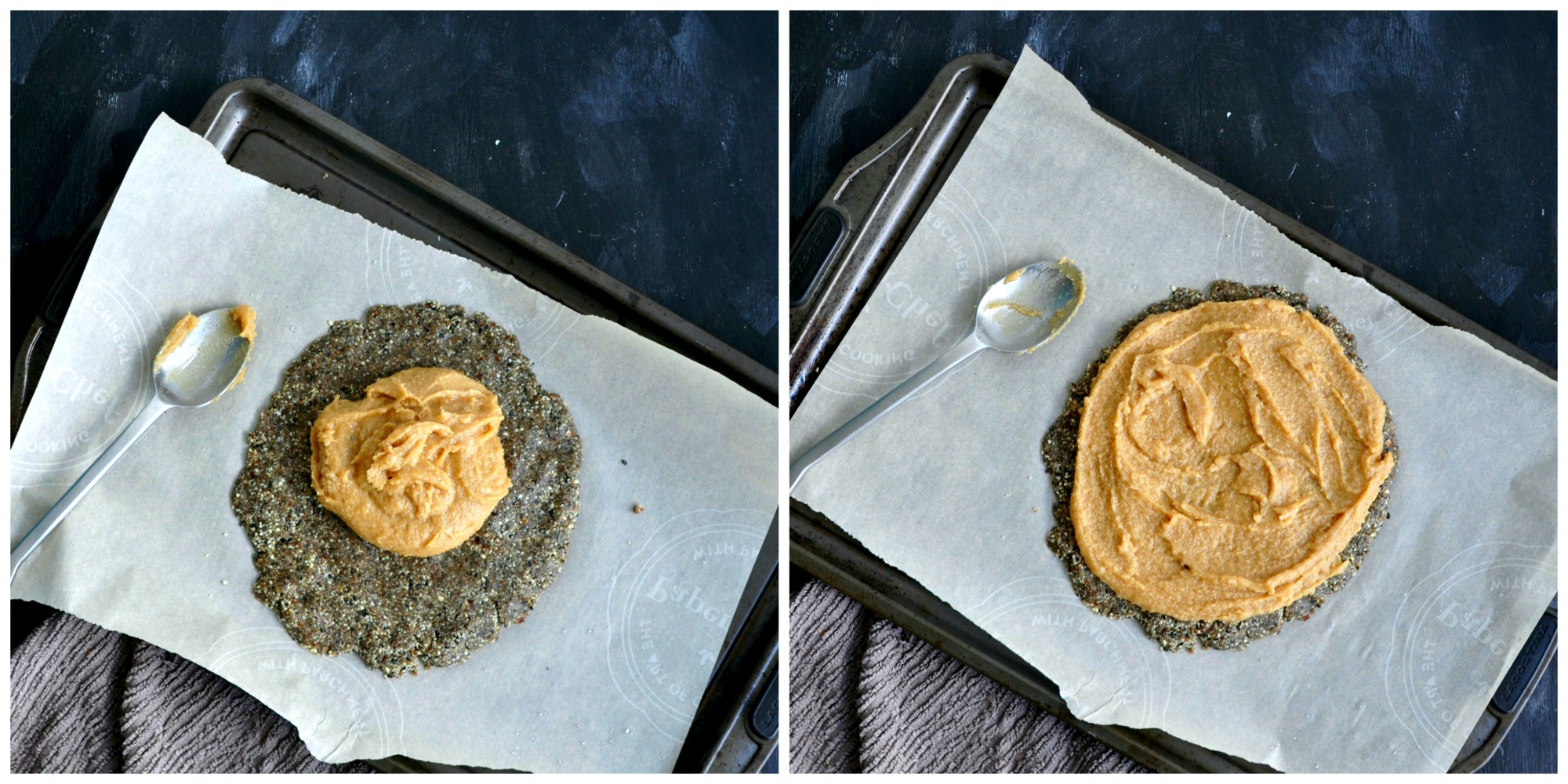 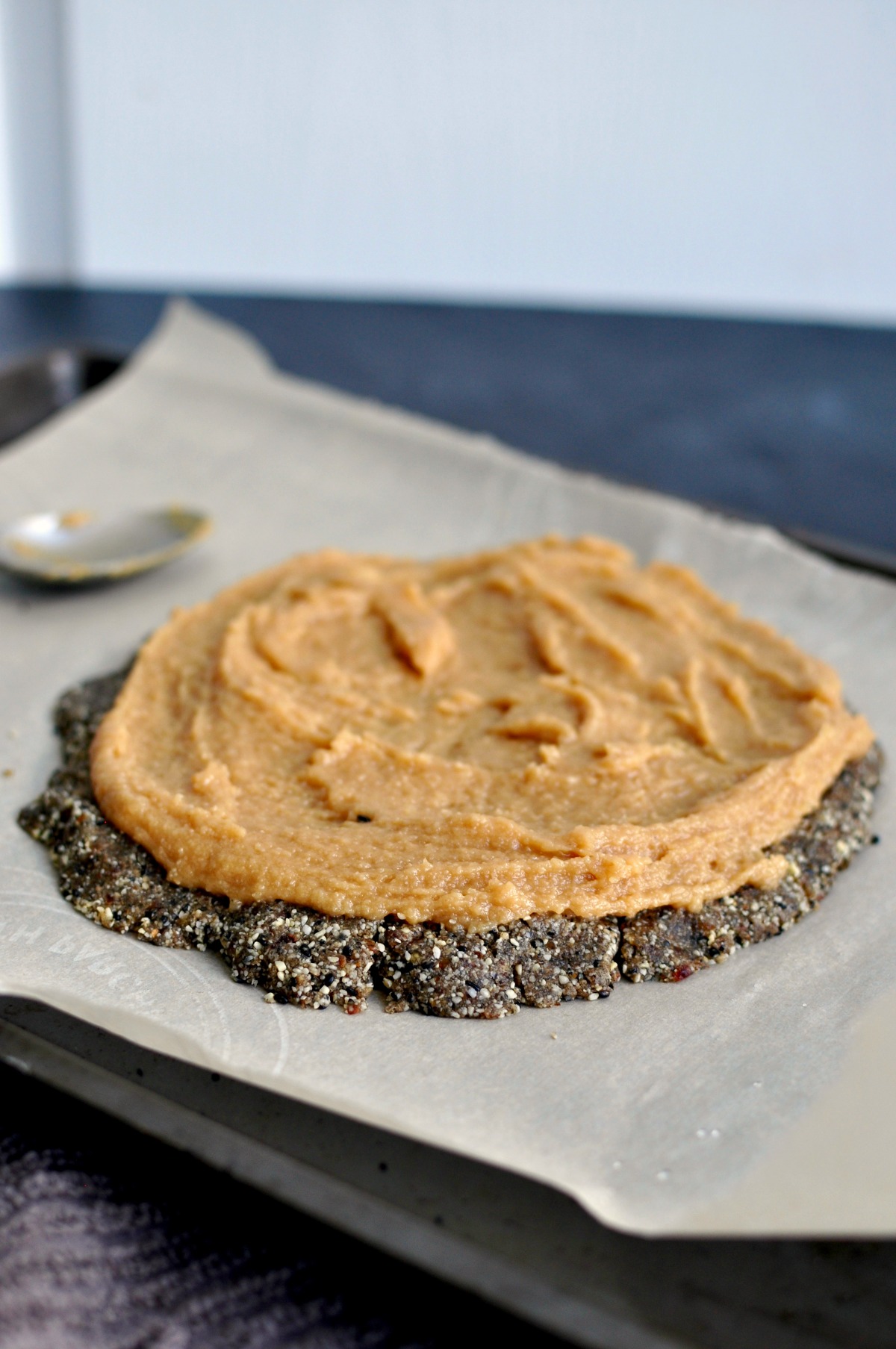 I can’t tell you how happy I am with these squares. They are so unique but familiar at the same time. They are made from a trusty base of almost equal parts nuts and seeds to dates. Normally I use walnuts or almonds, but the combination of cashews, which gives richness but doesn’t overpower the sesame flavour, and the black and white sesame are unreal. It also turns the most unusually appealing grey colour: I think black sesame makes the most delicious grey food! On top of the chewy base is a perfectly sweetened, creamy layer of maple syrup and tahini. Finally, a very generous drizzle of dark chocolate is sprinkled with toasted sesame seeds, coconut and a bit of coarse salt. 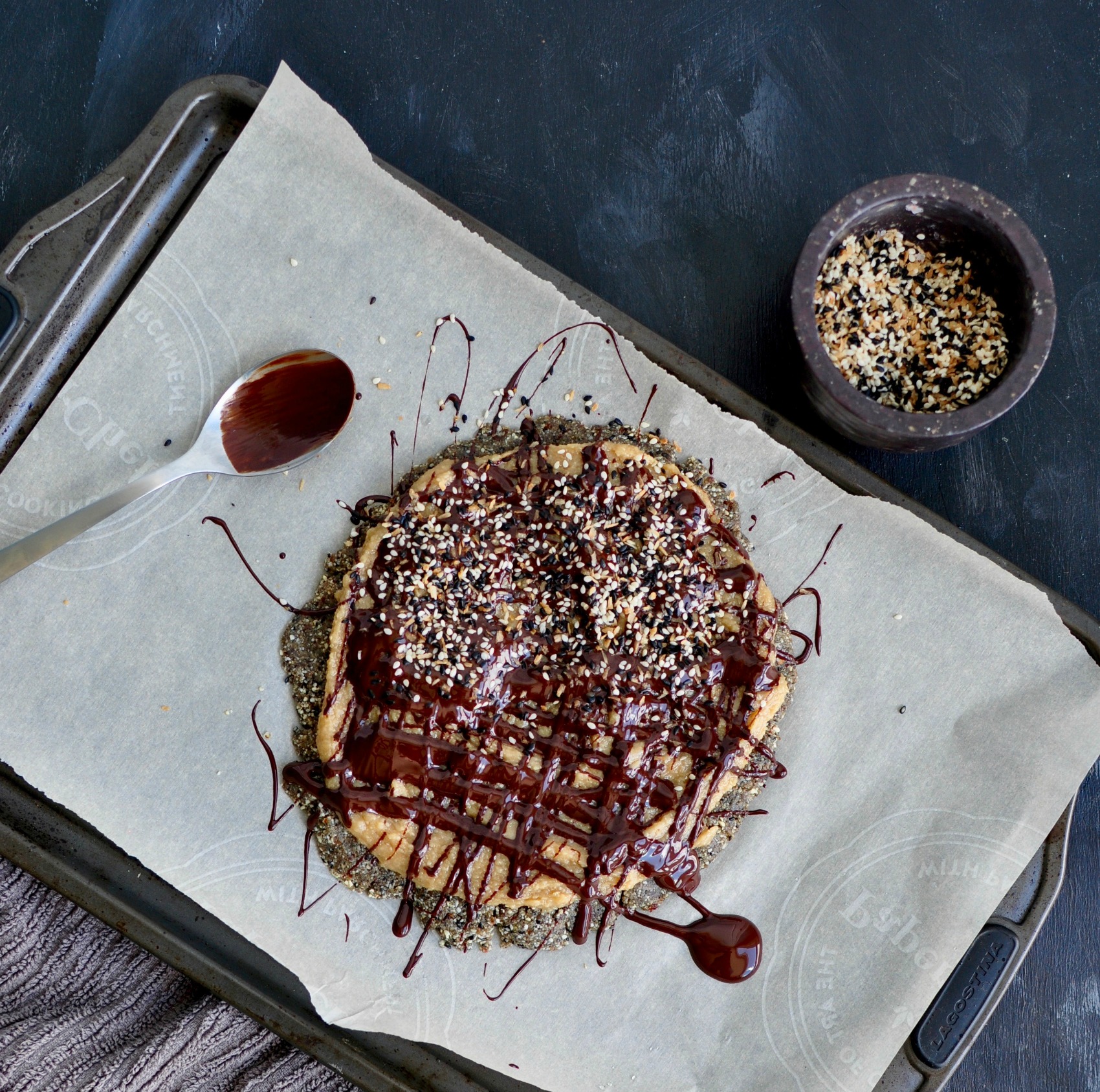 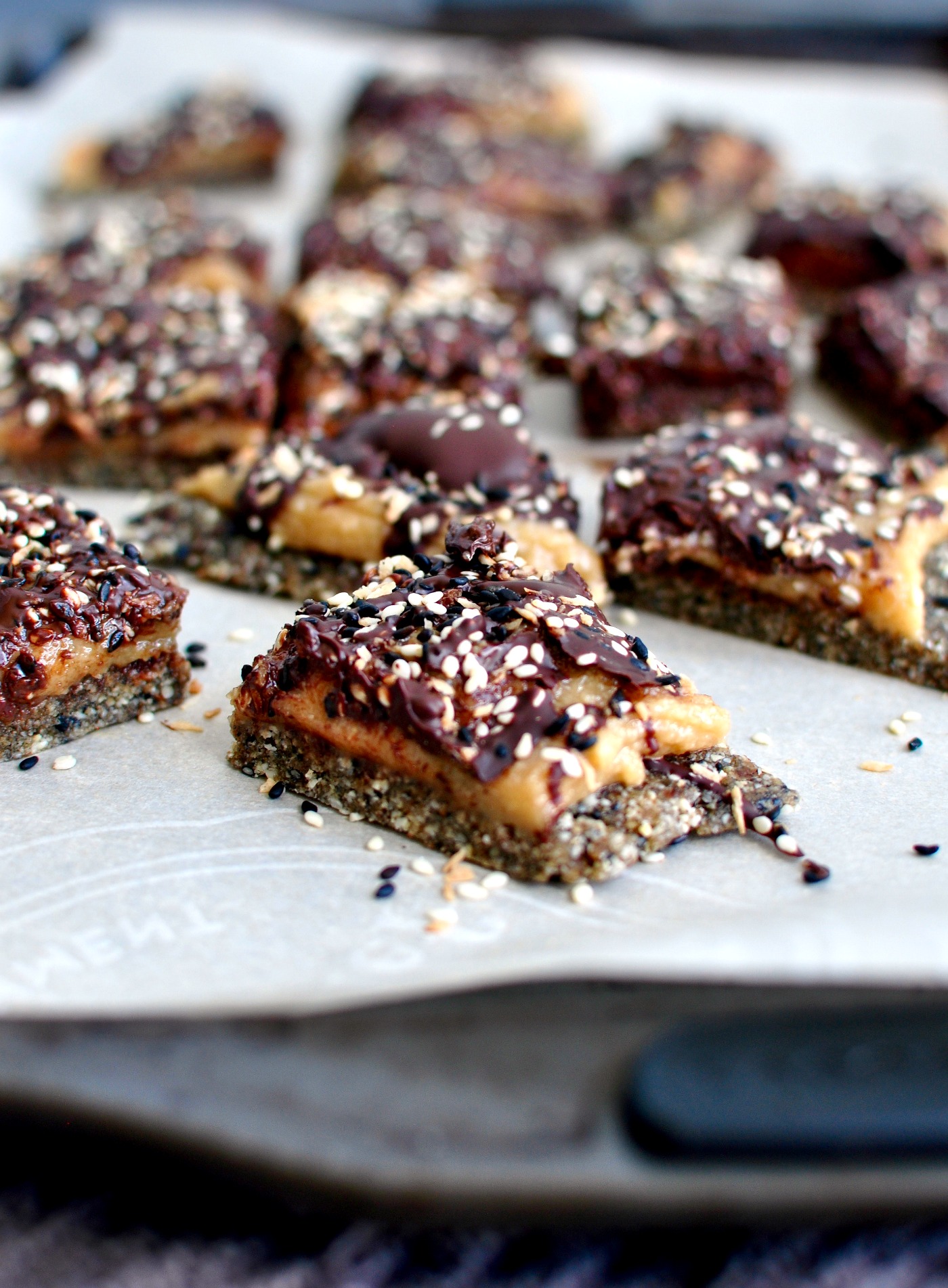 These squares are 100% the best sweet sesame snack to have sitting in your fridge. They’re even pretty healthy (although probably not at the rate that I am devouring them). I love the toasty flavour, the crackle of the chocolate on top, and the slight gooey-ness of the tahini centre. I am pretty sure that I will be making these again as I scrape the last of my tahini from the jar and again when I can buy more ingredients in our new place. For now, I hope that this is something that you try and that all of my experiments in using up the last of my food result in such sweet success! 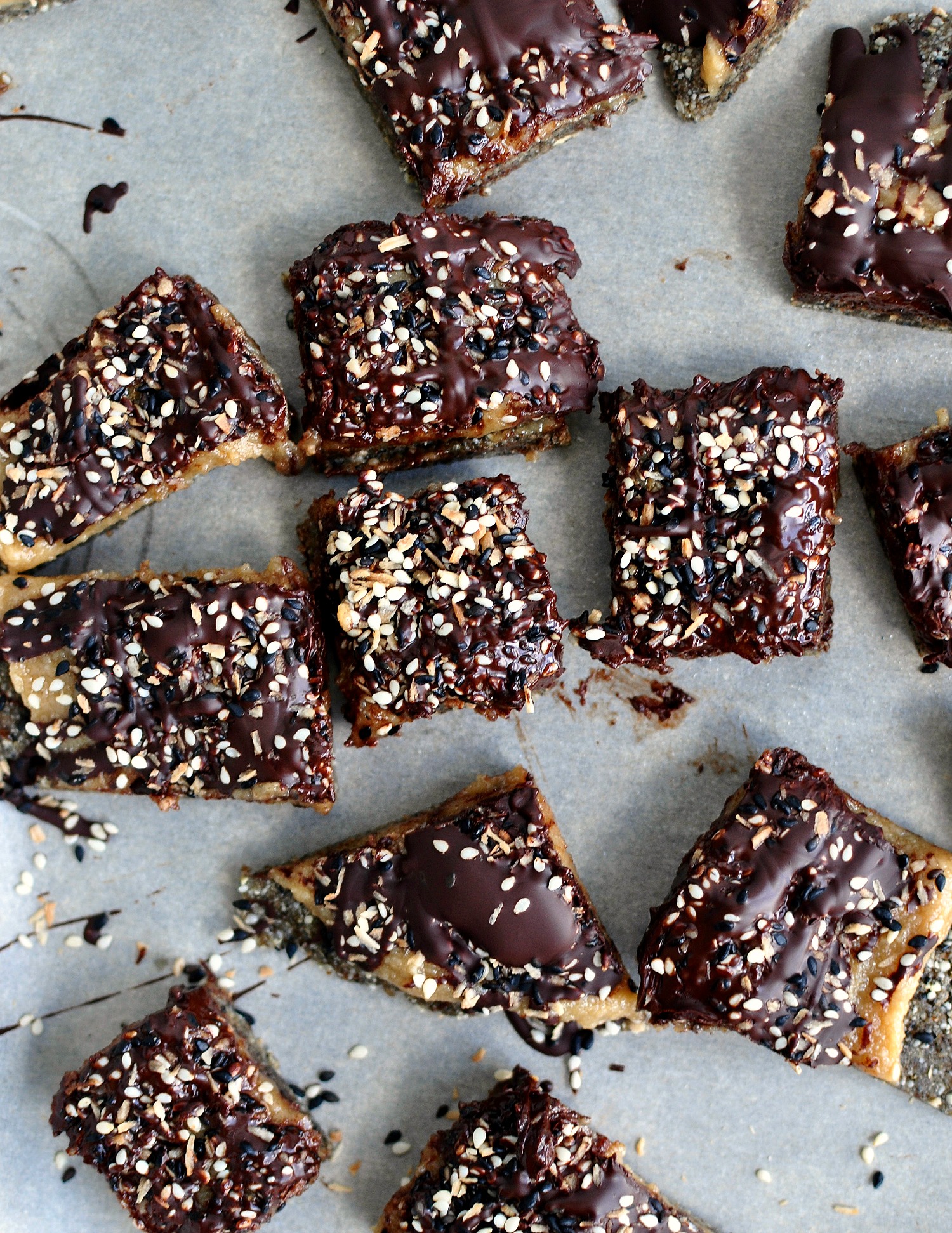 In a medium pan, over medium-high heat toast 1/4 cup of white sesame seeds and 1/4 cup of black sesame seeds until the white seeds start to turn golden brown and fragrant.

In a food processor, grind cashews and toasted sesame seeds until the mixture is a sandy texture.

Add dates to the food processor and grind until they are fully incorporated. The mixture should stick together when squeezed between your fingers. If it's not wet enough, add another date.

Press the base down into a circle that's about 1/3" thick.

In a small bowl mix together tahini and maple syrup.

Spread the tahini evenly over the cashew/sesame base. Place in the freezer.

In a medium pan, toast 1 tablespoon white and black sesame seeds (each) and coconut flakes until golden and fragrant.

In a small bowl, melt your chocolate (I used the microwave but you can also use a double boiler).

Using a spoon, drizzle chocolate all over the sesame squares, sprinkle generously with toasted sesame seeds and coconut.

Put in freezer for 15-20 minutes until everything is set (this makes it easier to cut).

Cut into squares (I cut mine into 16 pieces) and store in the fridge.