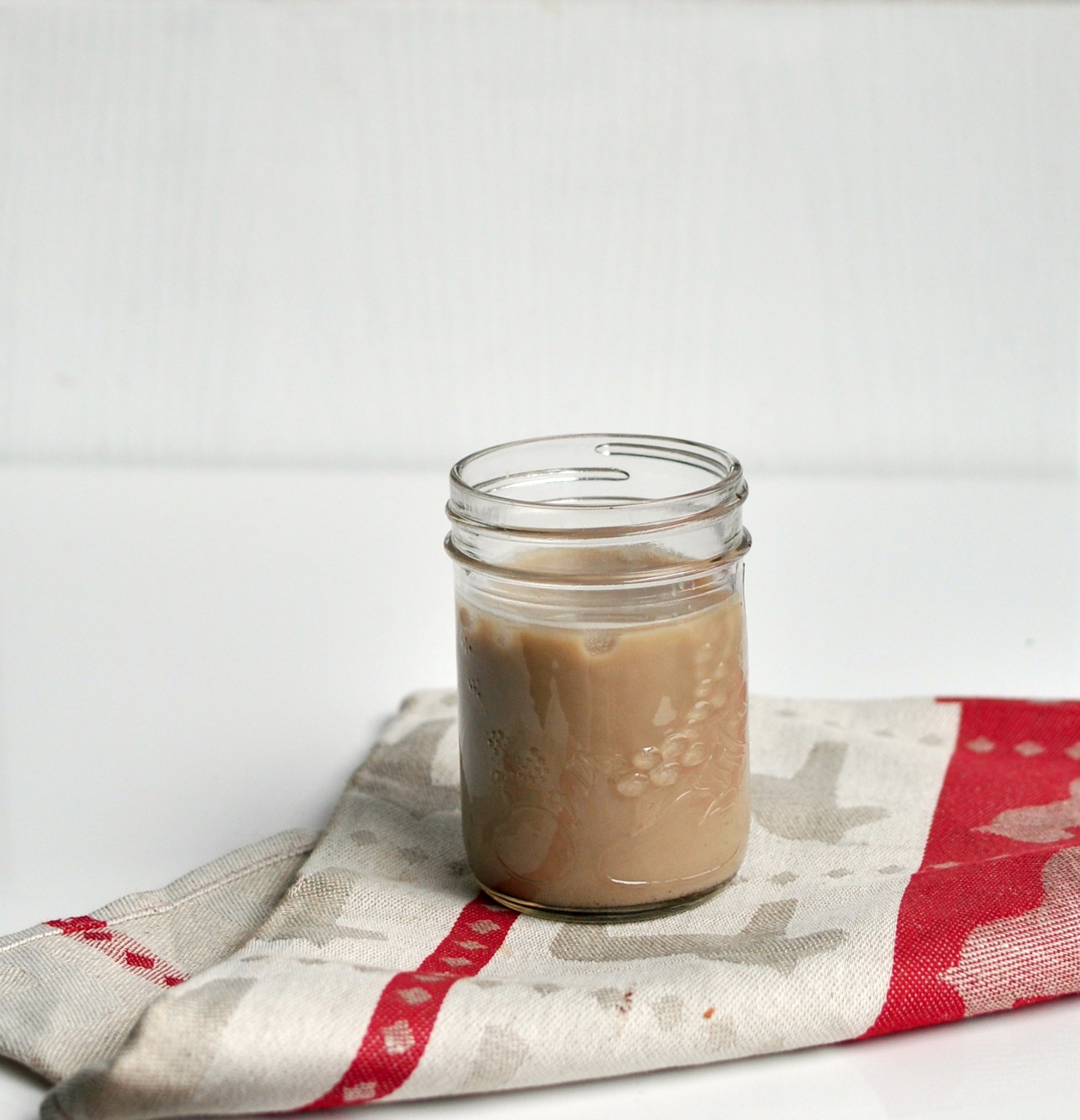 A couple of weeks ago we went to our local Asian specialty grocery store. I needed some dried mushrooms for a hot and sour soup (that ended up being one of the most disgusting things I have ever made… I was so disappointed, I don’t know what went wrong!). It was late in the day on a Sunday and I was feeling like a treat. I wandered over to the bubble tea counter and the black sesame and almond milky iced bubble tea really caught my eye. Then the dozens of giant syrup bottles behind the counter caught my eye too and I decided that I would pass on the bubble tea. I am sure I sound like a snob, but nothing beats bubble tea that actually uses fresh fruit and homemade flavourings. Either way, the flavour combination of black sesame and almond stuck in my mind and I knew that I would make my own at home when I had the chance. 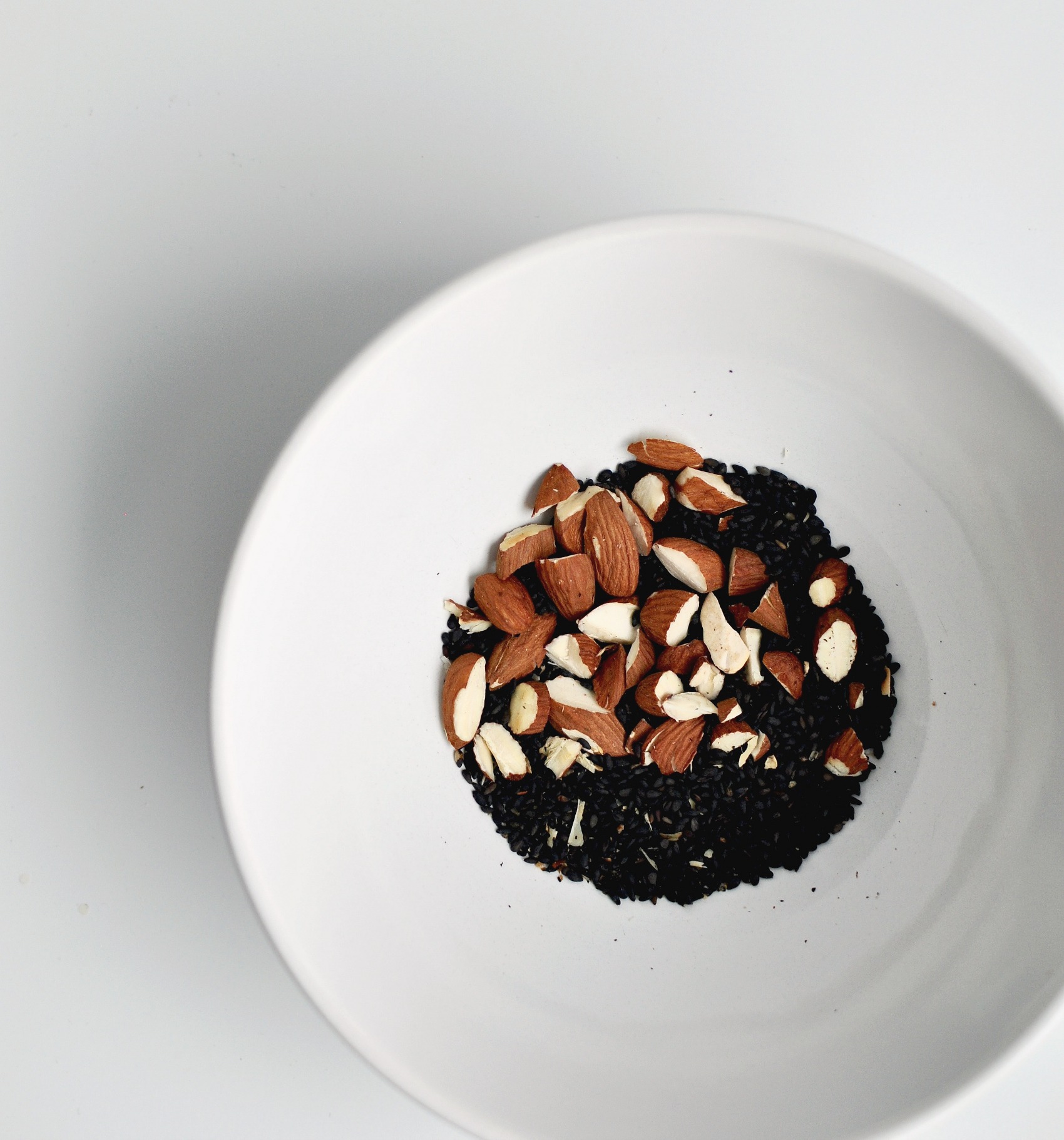 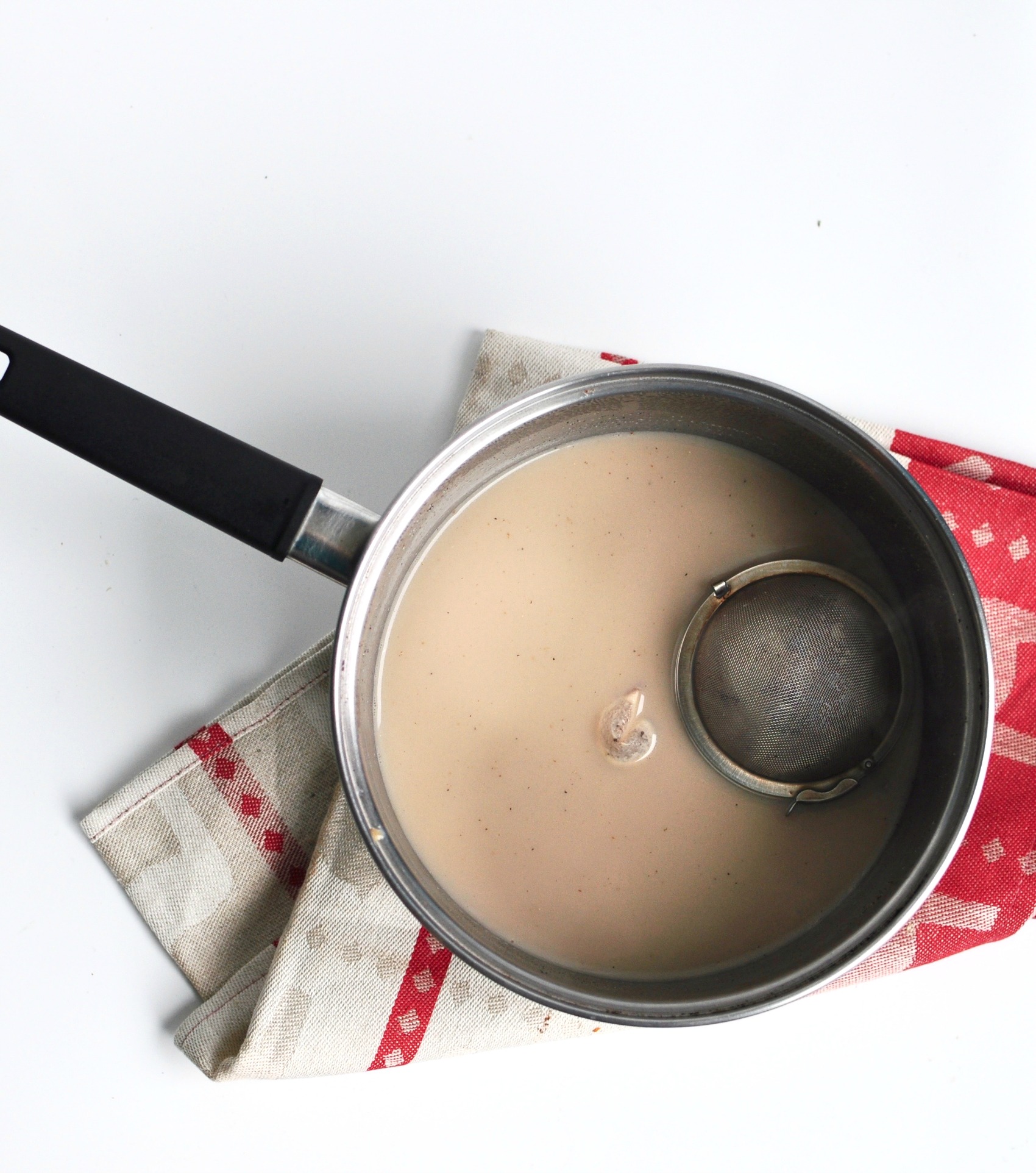 After a couple weeks had passed, I finally got around to making it. I wasn’t 100% sure how to make sure that the black sesame and almond flavours stood out so I pulled out all of the stops. First, I made sure to roughly chop the almonds and toast them, along with the black sesame seeds to intensify their flavours. Then I crushed them in a mortar and pestle to make sure all of the oils and goodness were properly released. I steeped that mixture in some hot water and milk, which slowly turned grey from the sesame seeds, I knew some of the flavour had to be transferring. Right at the end, I added the black tea bag, agave and some almond extract for an extra punch of flavour. And it worked! 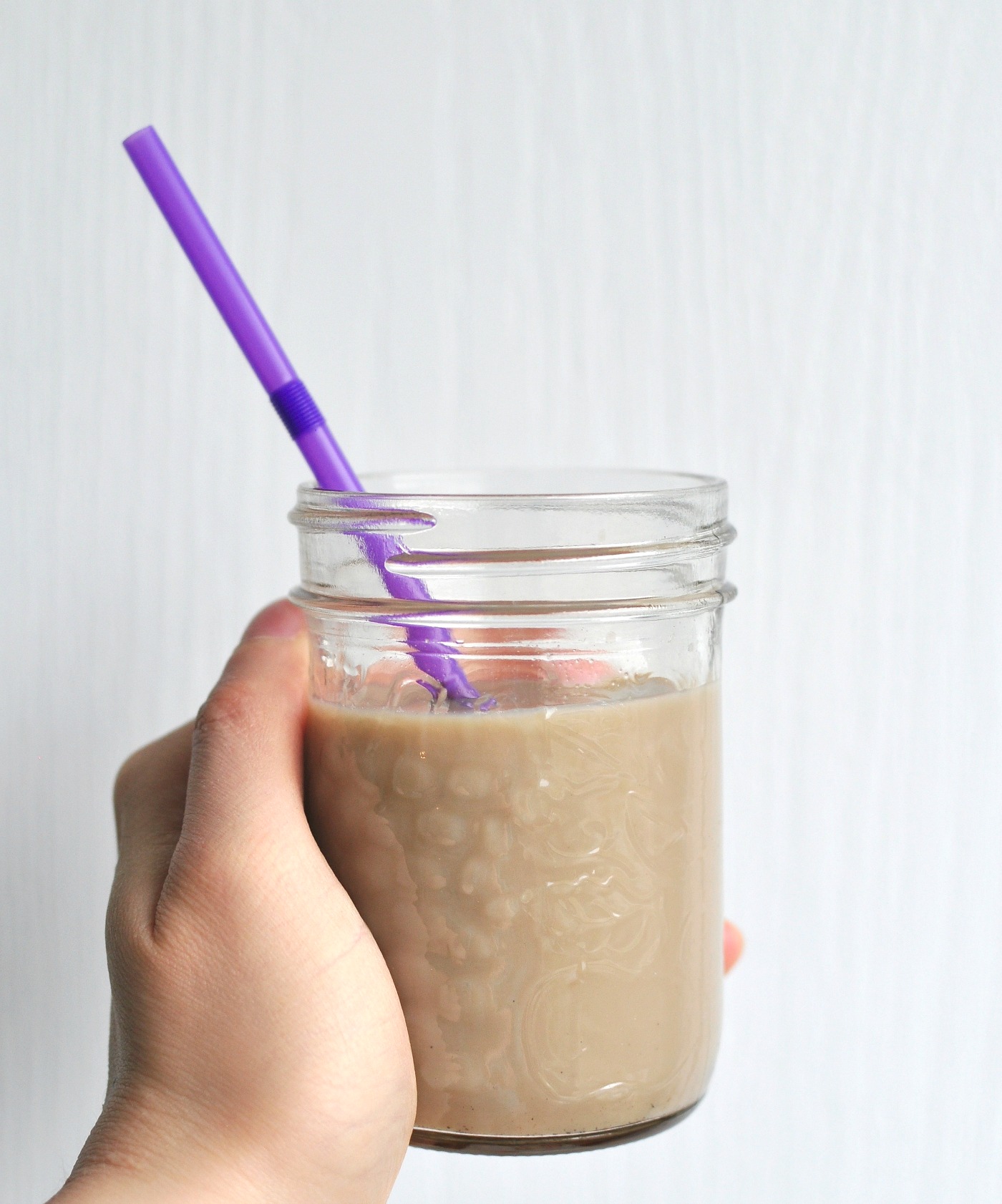 This is a very satisfying, slightly sweet, nutty, iced black tea. I love the flavours of both the almonds and the sesame and much prefer it super cold, although if you like, you can drink this hot too. The almond extract is definitely overpowering, so if you’re not super keen on that flavour, just leave it out. Personally, I love that marzipan-y taste. Of course, if you want this to be bubble tea, I have some instructions for how to make your our “bubbles”/tapioca pearls here. If I had any on hand at the time, I definitely would have added them in. 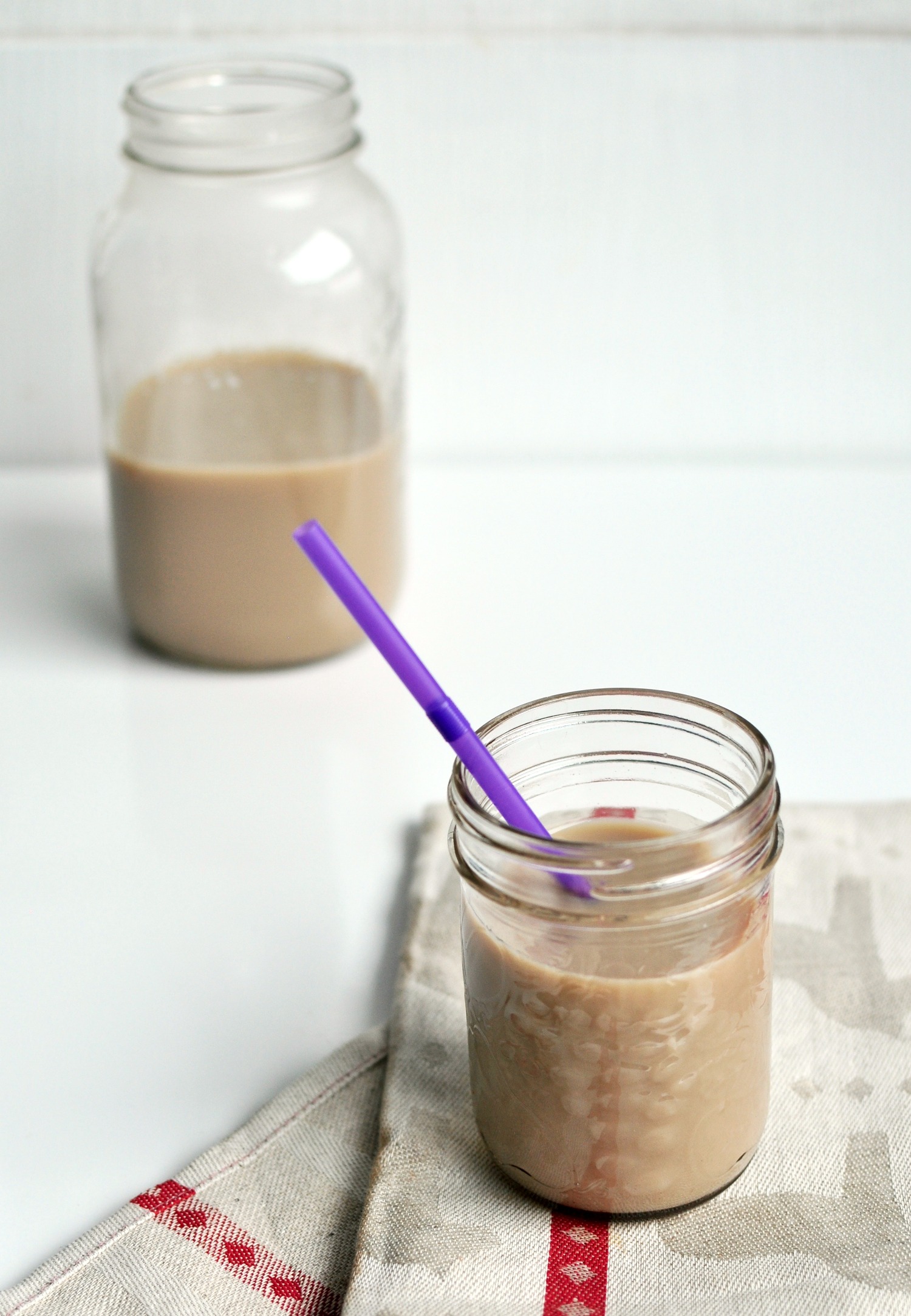 The inspiration for this recipe came from bubble tea. For instructions on how to make your own "bubbles" or tapioca pearls, check out this recipe.

I really enjoyed this drink iced, but you can definitely drink it hot if you prefer.

If you decide to use the almond extract, be warned that the flavour is definitely overpowering. I love that marzipan-y flavour though, so I would definitely go for it.

Transfer almonds and sesame seeds to a mortar and pestle, and crush them lightly.

If you have something that you put loose leaf tea in, place the almonds and sesame seeds in that, if not, that's ok.

Meanwhile, heat up milk and water in a small pot. Place almonds and black sesame into the milk mixture and steep it over low heat, for about 15 minutes.

Add the tea bag to the milk mixture and steep for another 5 minutes.

Add the almond extract and agave (to taste) if you're using them.

Remove the tea bag, almonds, and black sesame (strain the mixture if you put the almonds and sesame in loose).

Chill the tea in the fridge and serve over ice.