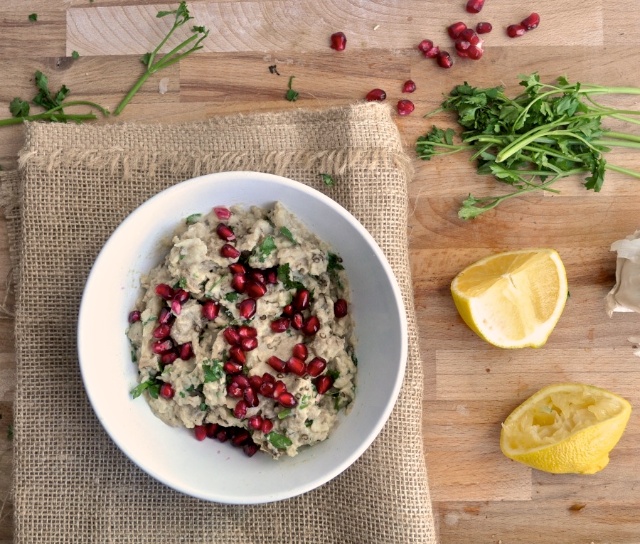 I keep buying eggplant and not knowing what to do with it. I feel like I use eggplant all of the time, but I don’t. In my mind it’s like mushrooms in the sense that it is super substantial and often used as a ‘meaty’ substitute in vegetarian cooking (why is that?) but in the end my uses of eggplant are limited to eggplant parmesan, eggplant with pasta, and asian-style eggplant. While I suppose that’s kind of a bunch of options, I was feeling like trying something a little bit different. So, I decided to make some babaganoush, one of the most classic, hearty dips in my books. 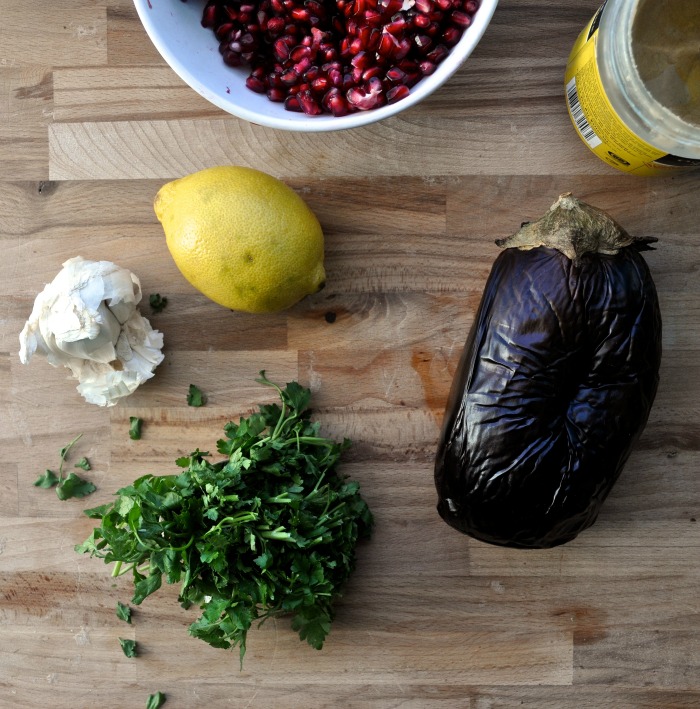 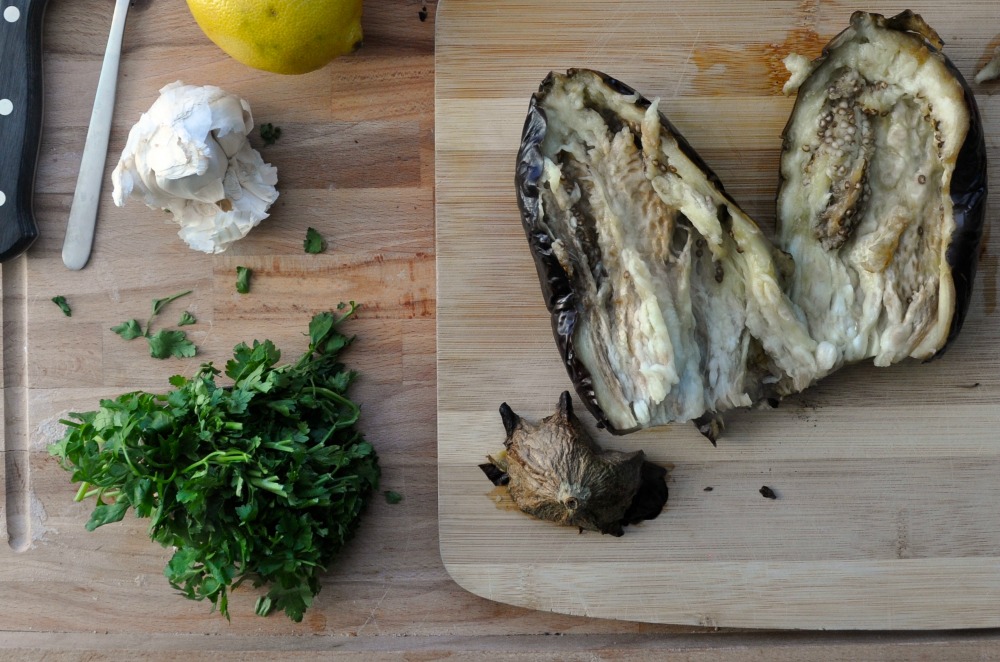 I really think there isn’t anything much better than having a nice, hearty dip hanging out in your fridge to snack on here and there throughout the day. Along with guacamole, tzatziki and hummus, babaganoush stands out in my mind as a dip that I always used to have around the house as a kid. While the other three make very regular appearances in our house, babaganoush is not a typical dip for me to whip together. Even though it requires very little active work, usually, when a craving hits, I want my dip right away. Can’t wait for an oven to heat up. But, with a bit of foresight, I look forward to having this on hand since it ticks all of the “great dip boxes”: great on bread, great by the spoonful, great to dip some carrots into. 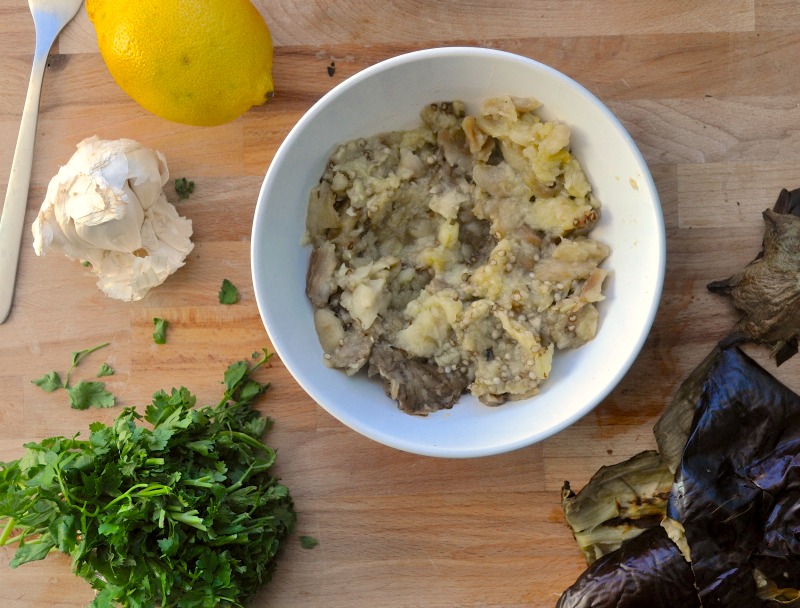 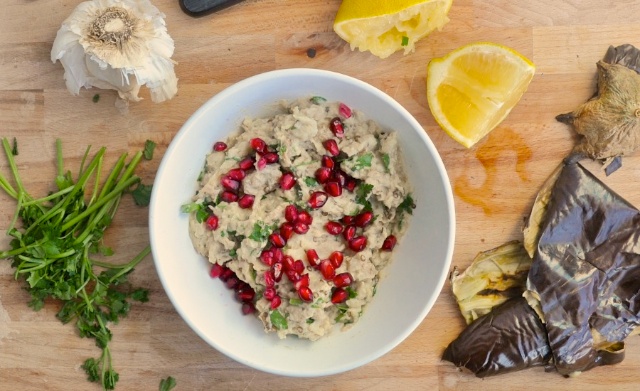 Classically, babaganoush is a bit smokey from charring it on a grill or on a gas stove. Back when I had a gas stove, I thought a lot more about this sort of charred vegetable dish, but it worked out just as well without it. While it’s not as smokey, don’t be deterred if you have a regular oven! Everything makes sense when I think about babaganoush: eggplant, parsley, lemon juice, salt and tahini, how can you go wrong? I added the pomegranate seeds for an unexpected bit of sweetness and texture. I decided not to blend the babaganoush, but you can do that if you feel like a super smooth texture. Personally, I like the chunkier texture, which is still very soft since the eggplant is so fully cooked. While you can definitely just eat it slathered on pita, I ate some dolloped on faro with some roasted cauliflower. It just gave an extra something to an otherwise plain dish. 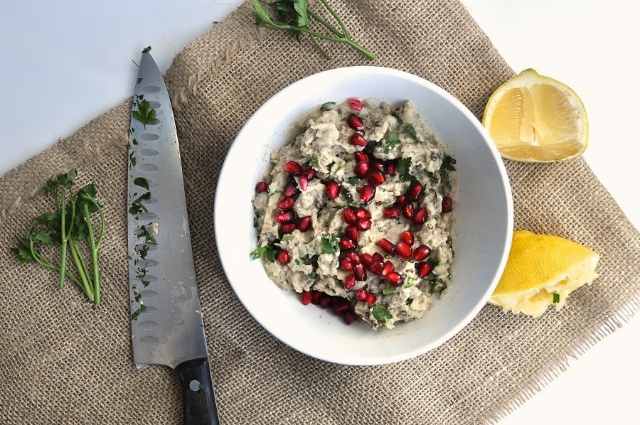 Let the eggplant cool down a bit, cut it in half lengthwise and scoop out the flesh. You will have about 1 cup of eggplant

Taste and adjust levels of lemon juice and salt to taste.